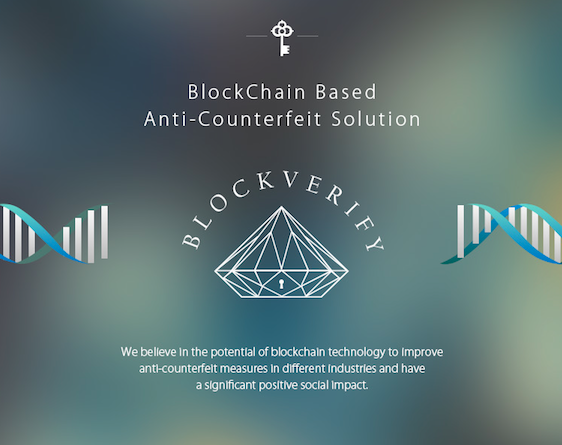 While I was attending the Inside Bitcoins Berlin conference over the past few days, all of the event’s guests were treated to a surprise announcement made by the people over at Block Verify. This unexpected intermezzo had everything to do with using the blockchain technology in such a way that can benefit each and every one of us : combating counterfeit products and goods. Block Verify believes the blockchain holds the technology needed to combat counterfeit goods on an universal scale. Block Verify will use an advanced blockchain solution to allow monitoring of the whole supply chain including trading partners and product sourcing.

Improving anti-counterfeit measures can only be achieved by using a decentralized, scalable and tamper-proof solution. Block Verify will make use of a private blockchain, a highly scalable transparent protocol, in order to assign every manufactured product as an asset. All of these assets will then be added to this blockchain and assigned a unique identification number [called “hash”].

“Bitcoin was originally used to buy illegal drugs. Now we are using the same technology; the blockchain to help stop the distribution of dangerous counterfeit drugs worldwide.” 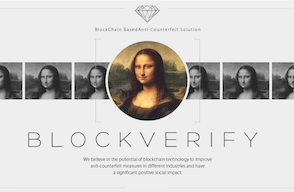 The blockchain will verify these hashes in order to determine whether or not the item in question is legitimate or counterfeit. Whether it’s a handbag, a tablet, or more importantly – a medicine, any and every item in the world will be verified through the blockchain. And this is where this technology’s major strength comes into play : anyone in the world can access the blockchain without any restrictions, and conduct their own item verifications.

One of the issues to take into consideration is the change of ownership of an item. Have no fear, as this is another fine quality of blockchain technology, as it can provide absolute verification regarding the when and who of the ownership change. On top of that, the blockchain prevents malicious individuals or groups from creating duplicate item records.

This whole concept relies solely on a trustless platform in the form of the blockchain, which not only holds all of the vital information, but is also given absolute trust by Block Verify. Absolute trust is achieved by putting information on both the private and the Bitcoin blockchain, providing a transparent database to the level that is needed.

To put it in very simple terms : the blockchain does not lie, can not lie and will never lie. Every record on the blockchain is verified to be 100% true, which in turn validates the legitimacy of your product. Block Verify is considering the usage of services provided by Factom, and both teams are working on finding the right mix.

Not only will this project bring more prestige to blockchain technology, but it just one of the many examples of global good we can all achieve by embracing Block Verify. Many lives will be altered in one way or another because of the blockchain, and Block Verify has the potential to bring that power to every individual on this planet.

Counterfeiting: Damage on a Global Scale

Counterfeiting is a universal problem, whether we want to admit it or not. Most of the world’s population is affected by counterfeit products, which not only cost jobs, but also cost millions of lives each and every year. Despite the efforts made by governments around the world, more and more counterfeit products enter the global trade supply year over year. According to some recent projections presented by the International Chamber Commerce, up to US$1.77 trillion worth of counterfeit goods will enter the global trade supply in 2015.

When we talk about counterfeit pharmaceutical drugs, people’s lives are in danger regardless of their location, religion or ethnicity. On a global scale, we see over US$320 billion in counterfeit drugs being sold every year. Research has determined that 1/3 of all malaria drugs sold in Africa are fake. Fake malaria drugs lead to the deaths of an estimated 500,000 innocent people every year. Over 30% of drugs in the developing world are found to be counterfeit. Despite global efforts, the counterfeit market for pharmaceutical drugs is only increasing in part from technological innovations from criminal institutions.

Several solutions to counterfeit goods have seen the light of the day over the past decade, yet none of them has the ability to significantly impact the problem. Whether it is simple technology centralized on the company’s own servers, relying on the end user to manually verify a product – and only supporting a handful countries at that – or being a centralized [and easily corruptible] service, there is only one real answer to this problem : using the blockchain.

Block Verify has successfully completed the first part of a pilot program with a Swiss pharmaceutical company with a UK presence.

Pavlo Tanasyuk graduated with a degree in analysis, design and management of Information Systems from the LSE and has a MPhil in Technology Policy from Cambridge University. Pavlo founded a number of sucessful financial startups. He is currently the CEO of Monexy, a company that was developed by Pavlo, which has processed billions in transactions in Eatern Europe. Pavlo is now active in developing new blockchain applications and is a firm believer of its potential outside of financial world as well.