Bitcoin and the entire crypto market have been caught in the throes of an intense bout of sideways trading throughout the past few days.

The recent rejection at $18,600 struck a blow to BTC’s momentum and showed that the crypto’s rally had become greatly overheated. This rejection sent BTC spiraling to lows of $17,400, from which point it has since seen a significant rebound.

Where the market trends next will depend largely on BTC and whether or not it can gain a strong foothold above $18,000.

One trader doesn’t believe that it will see any massive near-term momentum, as he is closely watching for a bout of consolidation throughout the end of the year before starting a new leg higher in 2021.

Bitcoin Surges Towards $18,000 as Bulls Try to Spark Momentum

At the time of writing, Bitcoin is trading up just over 1% at its current price of $17,990. This is just shy of the crucial resistance level that analysts have been watching over the past few days and weeks.

This level has become a pivotal point for the crypto, as previous breaks above it have sent it rocketing higher, while rejections here have been grim.

The coming few days should provide insights into just how important this level will be for Bitcoin’s mid-term outlook.

Analyst: BTC Likely to See Bout of Consolidation Until 2021

One analyst explained in a recent tweet that he is expecting Bitcoin to see some “healthy” consolidation in the near-term.

“Even though I am bullish in the macro and longterm, and I think the price will easily break above ATH next year, I think that a pullback would be healthy, just like in any traded market. It’s very important that we realize just how far we have come in such a short period of time,” he said. 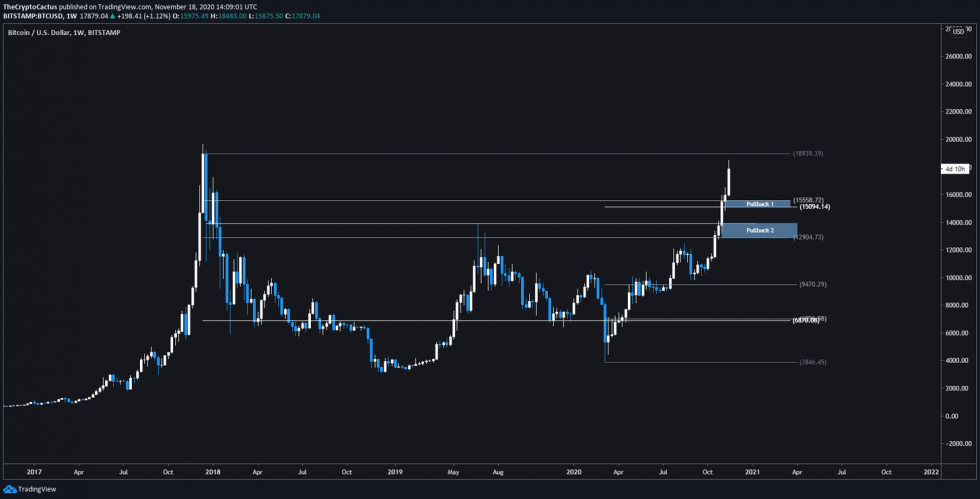 Unless Bitcoin rallies past $18,000 and closes above this level on a higher time frame close, there’s a strong possibility that it will kick off a bout of consolidation.