After a brief dip below $9,800, Bitcoin is again moving up. It has passed $10,400 over 24 hours with all signs pointing toward greater gains in the days ahead.

With the second break above USD $10,000 in two days, analysts are no longer debating whether or not Bitcoin is recovering. Discussion has now moved to how high the price may rise before reaching a ceiling.

The price surge is tied to statements by U.S. Federal Reserve Chairman Jerome Powell. Earlier today Powell testified before Congress, where he acknowledged that the fed is working on digital currency. Powell also recognized that cryptocurrency adoption poses a threat to the U.S. Dollar.

Bitcoin has now surpassed its recent high of $10,180 on February 9th, with no sign of a retracement. This upward price action has been swift. At one point the cryptocurrency moved up over $500 in under 6 hours, breaking $10,400. 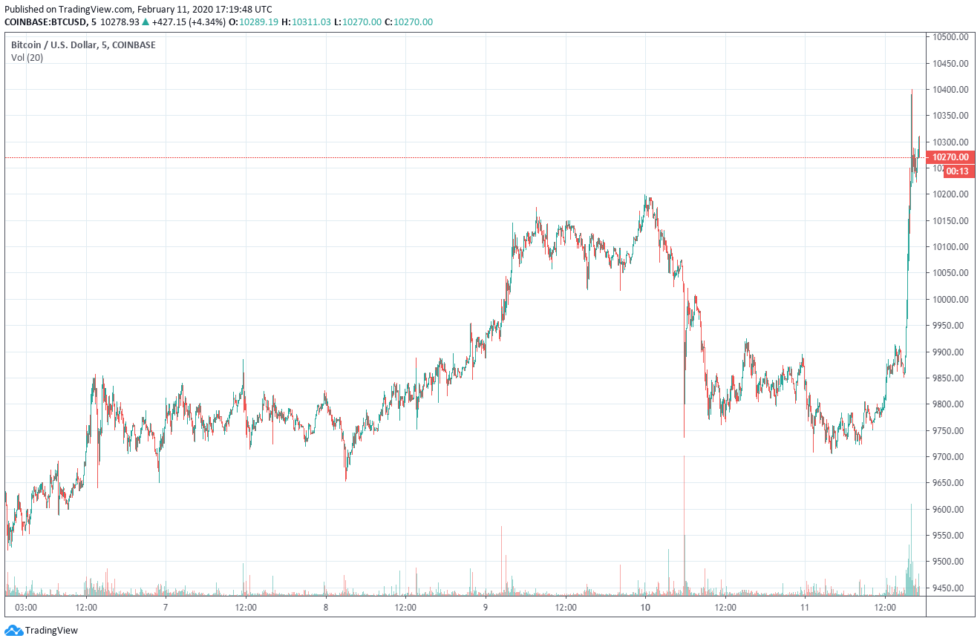 There has also been a notable increase in media attention toward Bitcoin, as well as in Google searches, further indicating that investors are expecting prices to move higher.

As has been previously discussed, sell-offs almost always follow rapid gains. This time was no different, as Bitcoin’s price dipped below $10k after the weekend run up. It is perfectly reasonable to assume that it will happen again, making short-term market prediction very difficult.

Also, attention continues to focus on the upcoming block reward halving. The expectation that this timed move will lead to higher prices appears to have taken on a life of its own. Analysts now overwhelmingly view it as a sign of an impending bull market.

The halving is expected in May

There is, of course, no doubt that legacy financial institutions are paying very close attention to Bitcoin’s rebound. In years past most traditional financial professionals derided cryptocurrencies as valueless frauds. There is now no question that they are here to stay and represent a new global asset class. The extent to which institutional investors will move into the market remains unknown, but it is folly to assume that they will remain on the sidelines indefinitely.

The present conditions are clear examples of the tremendous volatility within the crypto market. As more fiat moves into the space, rapid price swings are all but certain to become more common. Also, despite analyst predictions, history has proven that accurately predicting Bitcoin’s future value is next to impossible. The current price recovery should not be considered an exception to these rules.

Where do you think Bitcoin is heading this week? Add your thoughts below!