Nothing grabs the attention more than an epic price pump of any asset. Bitcoin is no different; however the groups of those against it, probably because they don’t comprehend it, are starting to emerge from their caves hollering about bubbles once again.

Bitcoin Is A Bubble … Again

We heard it all before in 2017; ‘Bitcoin is a bubble that will burst’. Granted, BTC did fall over 80% the following year but has since recovered back to just 45% in the past few months. Since its bottom of $3,200 in mid-December, bitcoin has made over 250% to current levels and does not look like stopping there.

Naturally, its energetic performance over the past few months has riled the rafts of those that still hold the opinion that BTC is a speculative bubble. American libertarian, stockbroker, financial commentator, and radio personality, Peter Schiff, is one of that ilk. Schiff is bullish on gold but frequently bashes its digital equivalent, Bitcoin.

In a recent tweet, Schiff once again said that Bitcoin was a bubble and that this is a ‘sucker’s rally’.

The outspoken chairman of commodity investment firm, SchiffGold, echoes the sentiments of many aging American traditionalists that only believe in their own investments. If Bitcoin is a bubble then gold must be considered one also since it is still down around 25% from its peak in 2011.

The crypto community did not take this lying down and the responses came thick and fast. One commented “My dude, you have been saying this since BTC was $16. Not $1,600 or $16,000, but literally $16.” Another chimed in with “I’m sure you remember the gold bubble back in 2011 right? That one still hasn’t recovered 8 years later.”

The most pertinent, however, was an infographic depicting the ‘bubble’ in action, time and time again plotted on a logarithmic chart. 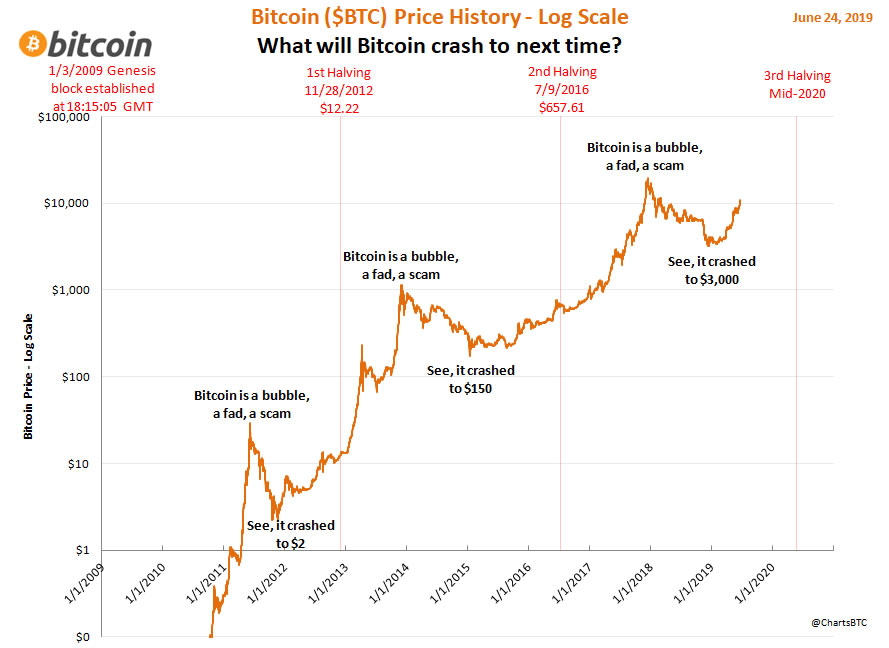 Another renowned Bitcoin basher and perma-bear, Nouriel Roubini, has also been uncharacteristically quiet regarding BTC recently as it surged back above five figures. There are many that simply do not understand Bitcoin and they tend to be in the latter years of their lives and bought up on traditional investment vehicles such as stock markets, real estate or commodities.

It can be said that BTC is pretty speculative at the moment as it has yet to be fully embraced as a global currency. Considering that is a spec compared to the multi-trillion dollar gold or stock markets, and is even smaller than some US tech companies in terms of market cap, Bitcoin still has a long way to go.

Is Bitcoin in a bubble due to its latest rally? Let us know in the comments below.