As billionaire businessmen Elon Musk and Jeff Bezos plan to launch thousands of satellites into the Earth’s orbit, crypto investors ponder how this will benefit Bitcoin.

Bloomberg recently reported that Elon Musk and Jeff Bezos are planning to launch approximately 3,200 low-orbit satellites. A July 4 filing from Amazon indicates that the fleet will provide low-cost broadband to tens of millions of people living in areas lacking proper access to the internet.

Musk also has the same idea in mind and appears a few steps ahead of Bezos and the Federal Communications Commission (FCC) has already granted Musk’s Space Exploration Technologies Corp., permission to launch 11,943 satellites and the company launched 60 in May. Bezos said the project is expected to cost “multiple billions of dollars” and in April Amazon issued a statement explaining that:

This is a long-term project that envisions serving tens of millions of people who lack basic access to broadband internet.”

While it’s clear that the two billionaires are now in a literal space race, the outcome could be beneficial to a significant portion of the Earth’s population. Cryptocurrency supporters were also intrigued by the announcements and many are now speculating how affordable worldwide internet (courtesy of Elon Musk) could benefit Bitcoin.

Will Bitcoin Moon from Affordable Internet?

Popular crypto-Twitter analyst Rhythmtrader suggested that “with a cheap smartphone, anyone in the world, no matter how remote, will be able to use Bitcoin.” 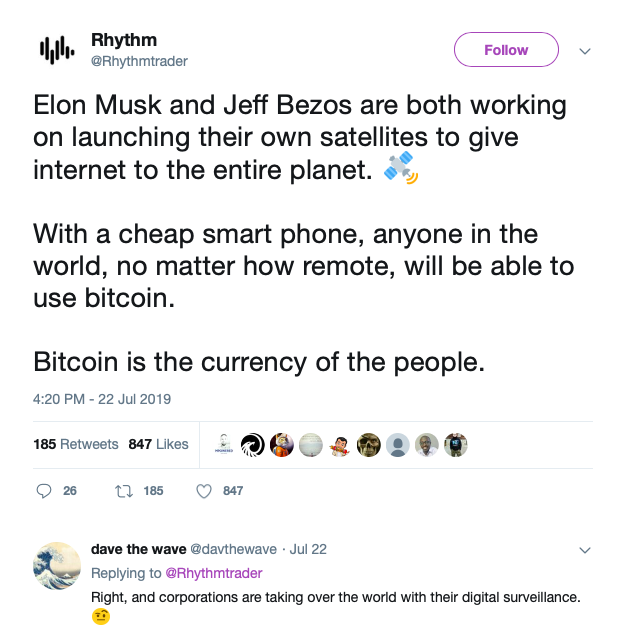 Rhythmtrader believes that universal internet access will allow Bitcoin to truly serve as “the currency of the people” but not everyone agrees with him. Fellow crypto-Twitter analyst Dave the Wave quickly retorted, “right and corporations are taking over the world with their digital surveillance.” Other followers pointed out that Bitcoin has ‘already gone outer space’ and referenced Blocksteam’s satellite and the ability to send Bitcoin via radio waves.

It seems sensible to conclude that cheap, universal internet will bode well for Bitcoin and adherents to the Bitcoin to $100k school of thought will point out that the digital asset’s limited supply will translate to exponential growth in the value of each coin.

Amazon’s FCC filing mentioned that currently, 21 million Americans lack access to fixed, residential broadband and at least 33 million don’t have access to fast internet. Furthermore, worldwide nearly 3.8 billion people do not have access to reliable broadband and many of these people happen to live in places where cryptocurrency exists as a feasible solution for the lack of developed banking and payments infrastructure.

Do you think Elon Musk and Jeff Bezos will catalyze Bitcoin adoption? Share your thoughts in the comments below!