Ethereum has been struggling to gain any strong momentum throughout the past few weeks. This stagnant price action has come about as Bitcoin enters full-blown bull territory as it pushes against $14,000.

Its price is currently struggling to break above $390 – as this level has held strong as resistance throughout the past few weeks.

Until this level is broken above and ETH can gain a foothold within the lower-$400 region, downside may be imminent.

One trader is noting that its relatively weak monthly close indicates that a decline below $300 could occur if it enters any strong downtrend.

At the time of writing, Ethereum is trading up marginally at its current price of $388. This is around the price at which it has been trading throughout the past week.

The price region between $390 and $400 has long been a strong resistance level. Until it can break above this price region, it will likely continue underperforming Bitcoin.

Analyst: ETH Weakness Signals Move to $270 Could be Imminent

While sharing his thoughts on Ethereum’s near-term outlook, one analyst explained that its latest monthly close suggests further weakness could be imminent.

He also notes that a decline towards $270 could come about if it shows any signs of intense weakness.

“ETH update: I gave the bulls a 5-day headstart to fix the monthly but it looks like they couldn’t manage. Given we’ve both lost support & now bearishly retested the resistance I’ll assume the last 3 months were a false breakout. Resistance: $390. 1st support: $270,” he said. 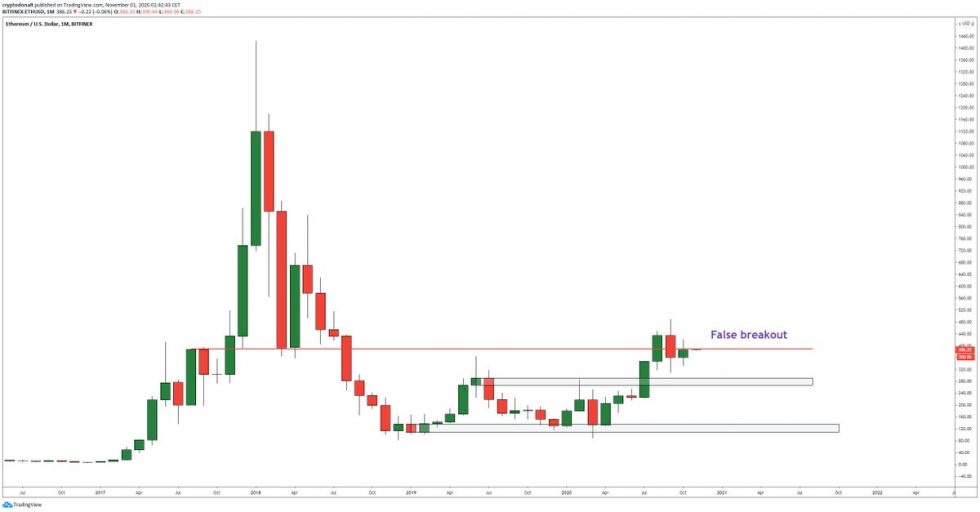 If Bitcoin rallies past $14,000, it could start generating some tailwinds that help lift Ethereum and other altcoins higher.

A rejection at this level could spark a grave downturn for assets like ETH.