Ethereum’s Bullish Trend May Not Stop It from Seeing a Strong Correction: Analyst

Ethereum and the rest of the crypto market have seen a notable retrace throughout the past few hours, which has come about due to Bitcoin’s weakness in the time following its plunge from highs of $24,200.

Where the entire market trends next will undoubtedly depend on Bitcoin, as it has been a guiding force for altcoins like Ethereum.

One trader is now noting that Ethereum shows some signs of independent technical weakness that may cause it to see further downside.

He specifically points to the cryptocurrency’s weekly Stoch RSI as one indicator that has nailed previous tops and is now flashing bearish once again.

At the time of writing, Ethereum is trading down just under 4% at its current price of $613. This marks a notable decline from recent highs of nearly $670 that were set yesterday.

Where the cryptocurrency trends in the mid-term may depend largely on whether or not bulls can defend against a break below $600 and continue respecting this level as a long-term base of support.

Trader: ETH Could See a Major Correction in Coming Weeks

One popular cryptocurrency trader explained in a recent tweet that he believes Ethereum could be on the cusp of seeing a notable correction.

He contends that this will take place over the coming few weeks due to a bearish sign flashed by its Stoch RSI.

“ETH – Is bullish but…. I’m looking for a correction over the coming weeks and months (much depends on BTC of course and ETHBTC). Weekly Stoch RSI has been nailing tops on eth.” 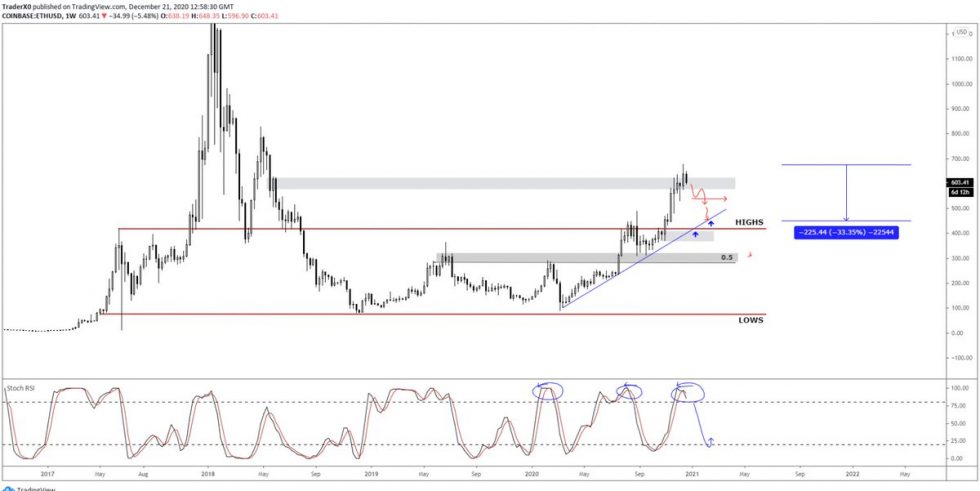 The coming few days should shine a light on whether or not Ethereum will truly continue underperforming against Bitcoin, or if it will soon be able to gain some ground.