Bitcoin and the rest of the crypto market have been caught within a bout of consolidation throughout the past day, which has impacted Ethereum greatly.

Yesterday, ETH was gearing up for what appeared to be a test of its $600 resistance, but the selling pressure here proved to be too intense, and Bitcoin’s inability to break above $19,400 also created some headwinds.

One analytics firm is pointing to the on-chain data that all seem to suggest that a bull-favoring move higher is imminent for Ethereum in the near-term.

Bitcoin has been in firm control of the aggregated crypto market throughout the past few days and weeks, causing ETH and other altcoins to track its every movement closely.

On Sunday, the benchmark cryptocurrency rallied as high as $19,400 before it lost its momentum and began consolidating. This led Ethereum to see a similar movement, being unable to break above $600.

Until $600 is flipped into support, ETH will likely be unable to gain any independent momentum.

According to one prominent analytics firm, multiple on-chain indicators are currently pointing to underlying strength for Ethereum.

They note that the number of new addresses just hit a 35-month high, with these new addresses also interacting more heavily with the network regularly – a promising sign. 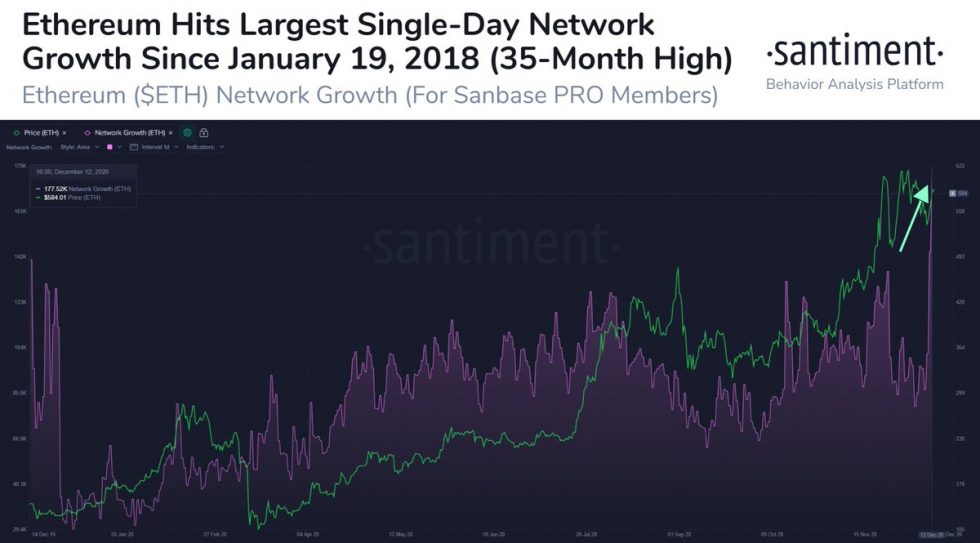 The coming few days should shine a light on whether or not this underlying strength will be enough to propel Ethereum’s price past $600.