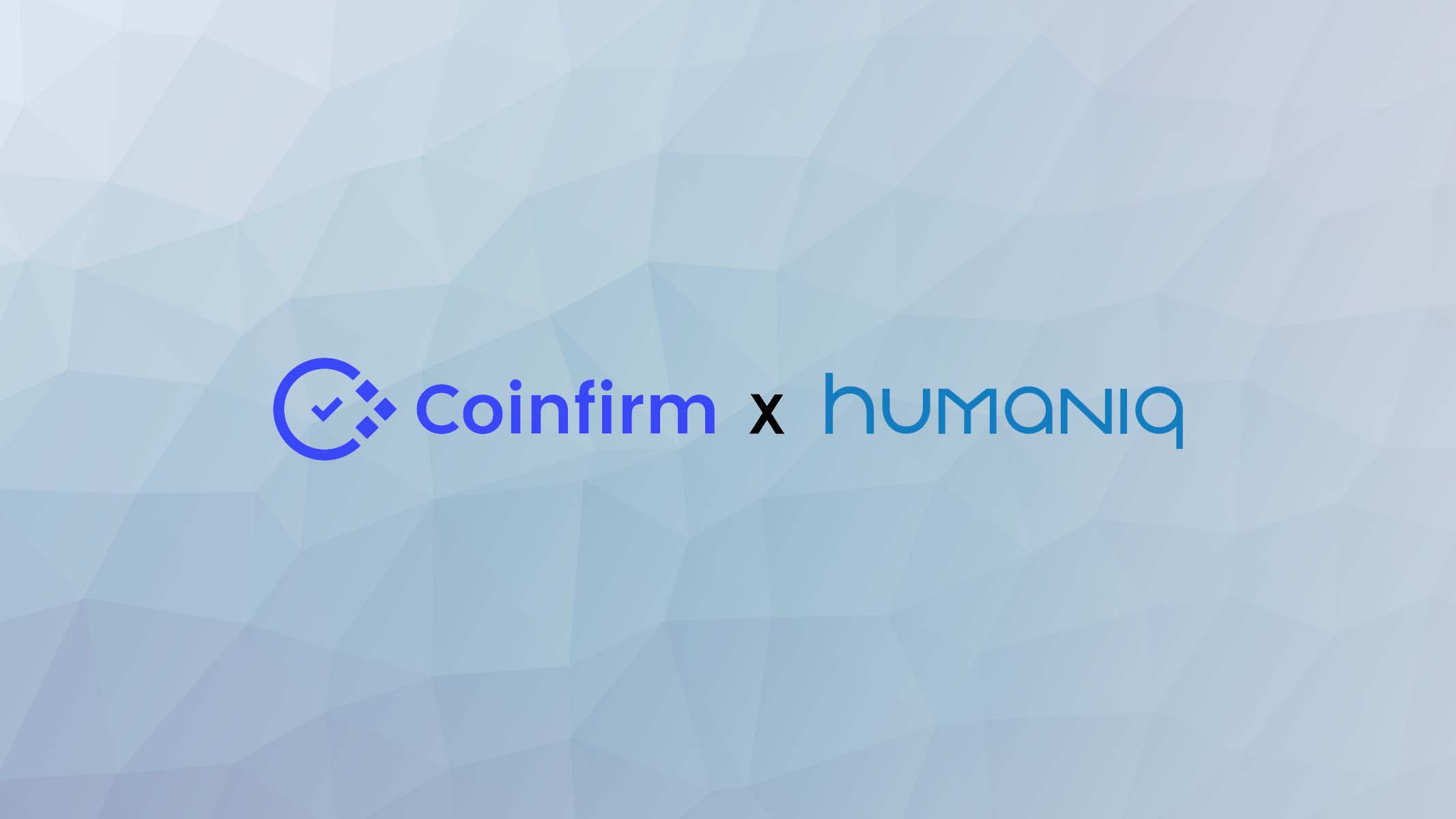 Coinfirm, a recognized Blockchain regtech leader known for its AML/CTF Platform, will integrate its platform across the Humaniq ecosystem to provide a new level of transparency and security. Humaniq will benefit from enhanced security, protecting transactions made in its native HMQ token from uncontrolled misuse.

The partnership will provide Coinfirm with access to all white-labeled HMQ wallets created on the Humaniq network. This will be used by Coinfirm to provide information regarding registered secure wallets and facilitate safe participation in the global economy.

Through their respective commitments, both Humaniq and Coinfirm today lay the foundation for a new standard of safety and compliance that encourages the wider participation in global markets. This will both increase the efficiency of transactions and also improve trust for new and existing members in those markets.

Coinfirm is not only a unique player in the traditional regtech space but is also guiding the blockchain industry in the area of fintech through innovative anti-money laundering solutions that provide added legitimacy to digital currencies. Our partnership helps drive the Humaniq mission of universal financial inclusion forward and together we can facilitate a new level of transparency, access and security to digital currencies, blockchain and the global financial system.

Humaniq utilizes a mixture of blockchain technology, biometrics including facial recognition and a mobile application to enable access to financial services by providing a wallet to users. Humaniq has focused on holistic solutions as they have grappled with the challenges of providing the unbanked with financial inclusion, from a lack of access to service providers and technology, to sparse formal identification mechanisms and low literacy rates.

Estimates show that if Humaniq achieves its aim of successfully global financial inclusion process it would also free up approximately USD 4.2 trillion dollars of capital for investments and market growth of the world’s poorest countries which could be used for infrastructure development, education, stimulating entrepreneurship, and enhancing the access to greater opportunities given the newfound financial empowerment.

Humaniq has run several pilots in multiple countries including Ghana in September, 2017 and has used these opportunities to further enhance its infrastructure and technological capabilities. Humaniq continues to plan and run pilots through local and global partnerships, digital strategies and with the support of its ambassadors. Humaniq has also recently run the Humaniq Challenge where the top three winners selected travelled with members of the Humaniq team to various cities in Kenya. The winners will be integrated into the Humaniq platform through their API and offered to Humaniq’s users in the future.

Humaniq and Coinfirm share many of the same values when it comes to making the financial system safer, more transparent, effective, and accessible for emerging economies and individuals around the world. We are happy that the two of us have come together to further build our missions and bring the benefits of blockchain, cryptocurrencies, and digital assets to the world.

Coinfirm has built its presence in the sphere through innovative solutions and partnerships with major players from both the crypto and traditional financial sectors for almost two years, including virtual currency leaders Dash and RSK (Rootstock), and international asset management funds such as SEI. The company also helped to establish the first Blockchain lab in Africa in Nigeria as part of an overarching vision to enable the worldwide adoption of Blockchain benefits — to be extended in partnership with Humaniq with a series of pilots around financial services for the unbanked.

Coinfirm is also set to release AMLT, the token of compliance, to bring a new level of transparency and democratization to the financial system by actively involving market participants in risk determination. AMLT Token will also fuel transactions on the Coinfirm platform, enabling risk management and creating a network for safe and transparent value exchange.

Humaniq is a London-based Fintech firm that provides next-generation financial services using its Blockchain-based mobile application to the unbanked and underprivileged in emerging economies globally. Humaniq is focused on worldwide financial inclusion by providing access to global markets, greater opportunities, and novel financial solutions using repurposed technologies for those gaining exposure to financial services for the first time.

Coinfirm is a recognized leader in their field,  ranked among the most influential blockchain and regtech companies and serves as a foundation for the safe adoption and use of blockchain. The Coinfirm AML/CTF Platform uses proprietary algorithms and big data analysis to provide structured actionable data that increases efficiency, reduces costs and streamlines compliance to near automation. The blockchain agnostic platform benefits companies operating around blockchain as well as major financial institutions, asset management companies and BI companies. www.coinfirm.io