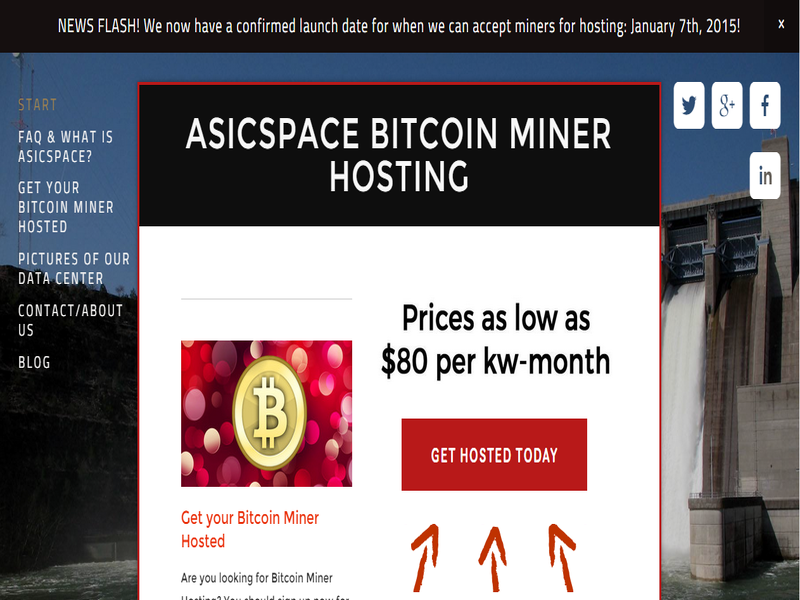 AsicSpace is an interesting project led Damir Kalinkin and Robert Van Kirk, which involves hosting Bitcoin mining equipment. When I contacted Robert regarding an interview he was quite excited to answer my questions and he did so assertively. Robert answers questions regarding AsicSpace and their role in the bitcoin mining industry. He also addresses how AsicSpace works in a customer point-of-view which should be interesting to those interested in having your equipment hosted by them:

ASICSPACE is a group of Bitcoin mining enthusiasts that have come together to hash in Wenatchee, Washington. The county Wenatchee is in, Chelan County, offers the nation’s cheapest electricity at 1.94 cents/kwh, (the national average is 10.35 cents/kwh) and we are proud to say 90%+ of our power is sourced from hydroelectricity, with most of the rest coming from wind, so almost all of our energy is coming from renewable sources. Wenatchee is located in Central Washington, where the climate is “high desert”, meaning that most of the year it will be cool, so in the summer months we can effectively cool our miners with evaporative techniques for even greater electricity savings.

In the simplest terms, How does the idea of hosting miners work?

It’s dead simple. Ship your miner to our mine, we will have it up in running, hashing away in no time. 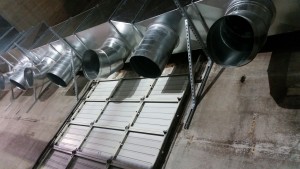 We have very flexible contracts where our customers can pay monthly for their hosting. The way our prices work, is that we charge on a per kilowatt, per month basis. So if you send us a 3kw miner, like an SP31, and want to pay month-to-month, then you’ll be charged 3 x $95 = $285 per month. If you do the math, our hosting is cheaper than even what a lot of people would be paying just for electricity to run their miners.

How can people trust sending their miners to AsicSpace while trusting that they will be used to their full potential?

We know that our customers have a special relationship with their mining hardware. Customers who send miners to us, no matter the size, get their own private VLAN, where they can access the interfaces of their miners just as if it was at their home. We also offer the ability for customers to monitor their hardware through a web interface where you can view it’s hashrate, temperature, and change pool settings. We even are setting up a webcam for one customer that wants the ability to physically watch their rigs 24/7.

What do AsicSpace’s facilities include in order to facilitate the harboring of mining hardware?

Mining with us is very safe. Our building is made of concrete, with no windows, with CCTVs and motion 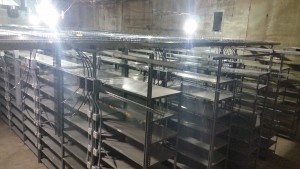 sensors. We don’t publicly disclose our location, and all of our customer’s equipment is insured for its full replacement value. We run our miners on 208V, while usually a home miner only has access to standard 120V outlets. A higher voltage means that your power supplies run more efficiently, are less likely to fail, and your hashrate is higher. We also have a highly redundant network, with service from two different ISPs. Our primary ISP is one of the fastest fiber optic providers in the nation.

Why did you start AsicSpace?

I realized the need for a Bitcoin miner hosting service when I was a home miner. Dealing with mining
rigs in your home can be a pain with the noise and heat they generate. My circuit breakers were tripping several times a day. My electricity bills were sky high, and I was close to being pushed onto a more expensive rate schedule. When looking at the absurdly high prices that enterprise data centers charged for server hosting, the idea of low-cost affordable hosting custom-built for Bitcoin miners sprung into my head. That vision has brought me out to Central Washington, which is the perfect place to start a Bitcoin mine.

Why did you feel a need to create a hosting service for miners compared to simply mining bitcoin and renting hashes? 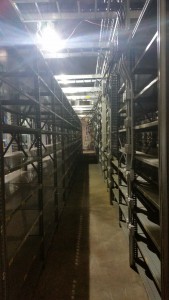 I think hosting offers a superior path forward compared to cloud hashing because as our customer, you know exactly what hardware you’re mining with, you have ownership over your equipment, and are secure knowing that your investment is “real” instead of possibly being a fictitious financial product or a Ponzi scheme.

Overall, I had a very nice experience chatting with Robert as he seems to have a great knowledge of bitcoin mining and how he wants to bring the company’s idea into reality. Not only this, the images he provided me make the facility look quite appealing for those wanting to host their miners with them and as of right now I see no reason why they are not trustworthy.

What do you think about the current state of Bitcoin  mining? Let us know in the comments below!