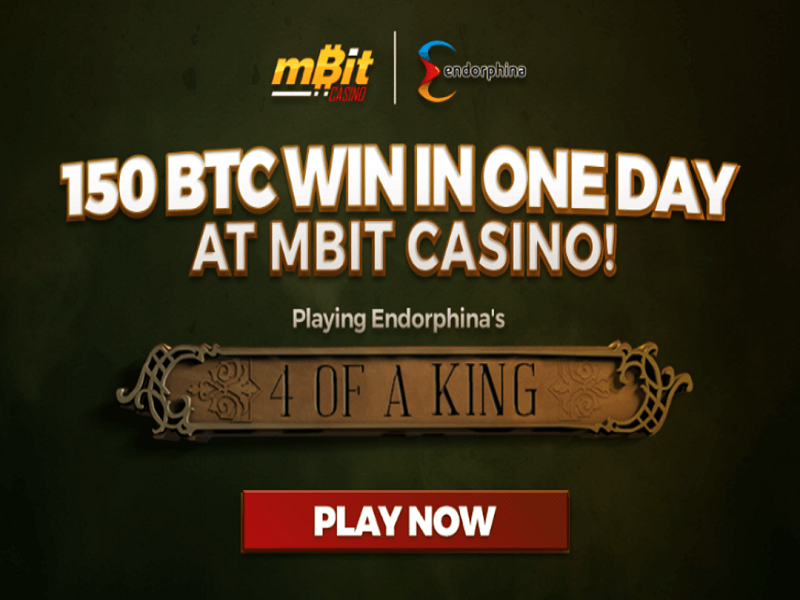 In yet another big payout on mBit Casino, a player has won over 150 bitcoins in one day by playing Endorphina-provided slot games, namely the popular 4 of a King. At press time, 150 bitcoins is worth $97,974 USD.

According to the casino, the player won most of the money from 4 of a King’s bonus rounds. As usual, in the interest in transparency, mBit casino uploaded videos of the player’s biggest winning spins to YouTube.

MBit has awarded large payouts to players before, most recently giving 100 bitcoins in September—worth more than $60,000 at the time—to a single player who scored massive wins on Geisha and 4 of a Kings.

The casino’s record for largest single payout stands at 275 bitcoins, worth nearly $180,000 at press time.

MBit credits its revamped VIP program for the recent payouts, relaunching it two months ago in August. “[The] VIP Program has been drawing in more and more high rollers since re-launching two months ago with an improved framework,” the company said in a press release.

The company’s VIP program is a multi-tier rewards system that gives players perks for return business. The four tiers—Black, Diamond, Gold and Silver—each have their own set of perks. The Black tier, the highest of the four, gives members a 1 bitcoin top-up on the casino’s bankroll.

The September 100 bitcoin winner echoed the casino’s claim of improved service since the VIP program relaunch, saying, “[It was] amazing how much better my gambling experience was with mBit. I won $57,000 and within minutes, the money was in my wallet.”

According to a press release, the casino hopes that the combination of improved service and the revamped VIP program will “prove that mBit Casino is truly the premier bitcoin gambling website.

Have you ever won big at mBit? Let us know in the comments below.