Controversial cryptocurrency proponent John McAfee revealed that the IRS has convened a grand jury to charge him, his wife, and four of his campaign workers, with ‘unspecified’ crimes of felonious nature. McAfee, who’s campaigning for the 2020 US Presidency will continue to do so ‘in exile’.

McAfee Hunted by the IRS

In a new video released on his official Twitter profile, John McAfee shared that the IRS has convened a Grand Jury in the state of Tennessee on January 22nd.

According to him, the authorities seek to put him on charges for ‘unspecified’ crimes of felonious nature.

The McAfee 2020 Campaign is, as of this day, in exile. I am being charged with using Crypto Cuttencies in criminal acts against the U. S. Government. More videos coming shortly. Stay tuned. pic.twitter.com/C75zcbnKTD

McAfee, who’s a popular cryptocurrency proponent, has more than once made the case that governments fear decentralized digital currencies because they can’t tax them.

Running For President ‘In Exile’

Now, McAfee, who currently appears to be in the Venezuela on a self-proclaimed “Freedom Boat,” says he’ll continue campaigning ‘in exile’. 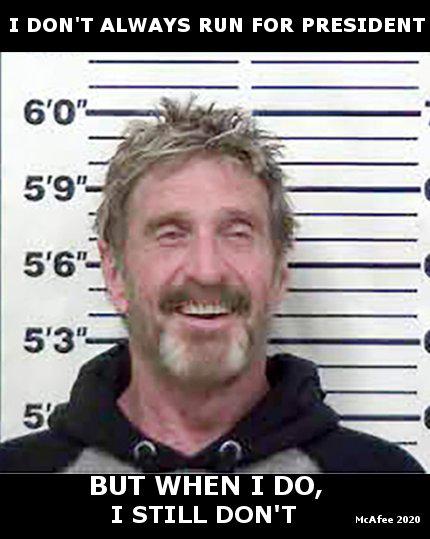 As odd as it may sound, McAfee intends to run his presidential campaign remotely… from a boat.

In another video, posted shortly after the first one, he details that his campaign already has ‘thousands’ of volunteers who will be wearing masks with a picture of his face on them.

These people will appear on various locations through the US, including conferences, debates, restaurants, and street corners, carrying portable loudspeakers through which McAfee will be voicing his merits.

Apparently, however, the cryptocurrency advocate doesn’t really want to become a president – he just wants the stage.

Please people .. don't get distracted by trivialities such as "am I eligible to be President?" Remember: i do not want to be president! I just want the stage. I just need to run. I did it once before in The Libertarian Party. Who cares whether I can?? I'm fucking doing it now!!

Interestingly enough, his latest Twitter blast caught the attention of Vladislav Ginko, the Russian economist who recently said that Russia is looking to invest $10 billion in Bitcoin.

Commenting on the matter of McAfee’s exile, Ginko tweeted:

You will never feel safe anywhere in the world from US enforcement until you will land to Russia. You’re welcome!

What do you think of McAfee’s plans to run his campaign remotely from a boat? Don’t hesitate to let us know in the comments below!