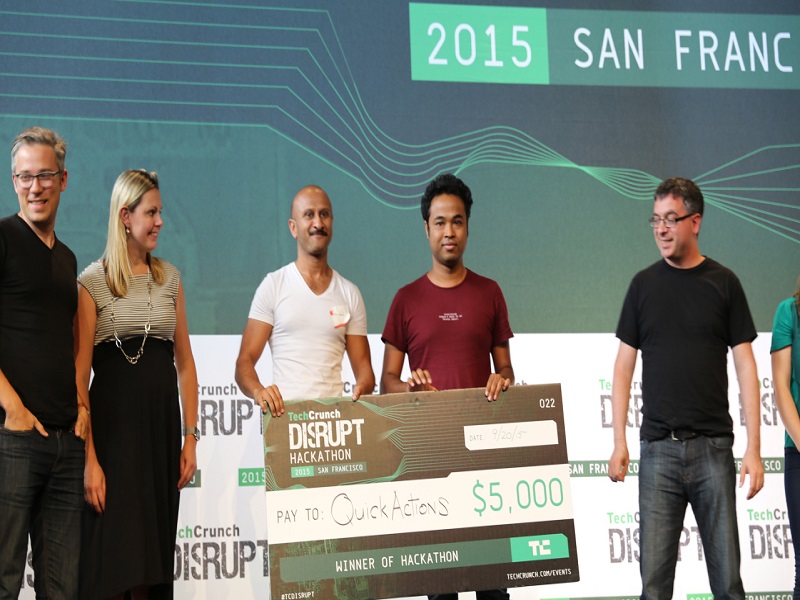 Yesterday, September 19, 2015, hundreds of hackers spent the day at Pier 70 in San Francisco working on projects in hopes to win the Disrupt SF Hackathon. In this competition, hackers have to create a fun and creative hack in 24 hours; the grand prize for the competition was $5000 USD, along with two runner-up prizes.

The winner of the 2015 Disrupt SF Hackathon is QuickActions. This hack is a virtual button that allows users to preview links and use shortcuts, among other things. Essentially, QuickActions adds utility to touch screen applications by giving users extra options when hovering over certain things on their touchscreen devices. QuickActions uses Android Overlays and features from existing Android apps; this app will be available in the Google Play Store in the near future.

Quick Actions got the grand prize, which includes a $5000 check, but two other interesting apps grabbed the runner-up positions. PitchPal helps users improve public speaking by recording and transcribing speech. Additionally, PitchPal provides users with analytic information and feedback regarding recorded speech, which can actually help users improve their speaking skills. Harvest landed in the second runner up position. This app is aimed at helping farmers prevent crop loss by detecting water stress in crops. Harvest is a modified point and shoot camera application with a specialized filter replacing the original infrared filter. The app cost less than $50 to build, and it can be installed on devices that are able to fly on drones, planes, and other aerial devices.

In addition to detecting water stress, Harvest has a web app that processes pictures taken with the camera app and points out “hotspots,” allowing users to track the health and progress of their crops over time.

This hackathon is a kick-off event for the Tech Crunch Disrupt conference, a three-day event focused on how technology can revolutionize industry and culture. The conference starts on Monday, September 21 and will run until Wednesday, September 23. There will be many speakers from several different people in the startup industry, including representatives from CloudFlare, Dropbox, and Telegram. Snoop Dogg will make an appearance on Monday with Ted Chung; the duo will give a talk titled, “A New Perspective on Culture and Industry with Snoop Dogg and Ted Chung.”

The first day of Tech Crunch Disrupt will feature a talk about Bitcoin as well. Starting at 9:45 on Monday morning, Wences Casares of Xapo, Nathaniel Popper of the New York Times, and Bobby Lee of BTCChina will deliver the talk, “Is It Time To Stick a Fork In Bitcoin?”

A General Admission ticket for the Tech Crunch Disrupt conference cost $2995, and will secure attendees an “All-inclusive conference pass for all three days.”

What do you think about the winner of the Disrupt SF Hackathon? Are you attending the Tech Crunch Disrupt conference? Let us know in the comments below!