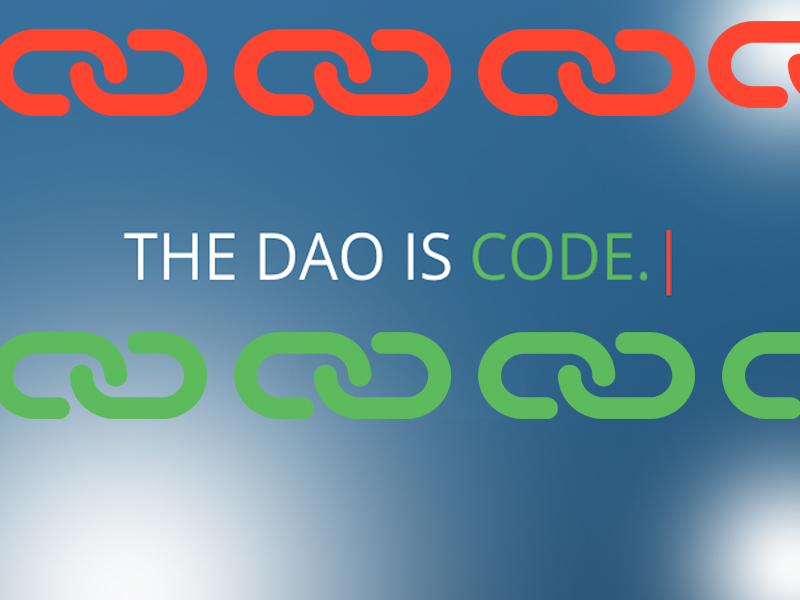 The DAO Becomes The Largest Crowdfund To Date

The programmable token Ethereum and its blockchain have been breaking the mould ever since its pre-sale was announced back in July of 2014. It launched with its initial sale in September of the same year and raised over $18.3 million USD becoming the sixth largest crowdfund to date. Following the exponential growth of Ethereum, developers who help maintain the community and Ether protocol have created a decentralized autonomous organization called the DAO.  The platform is built to support fund Ether projects and has recently skyrocketed past the Ethereum pre-sale becoming the biggest crowdfund ever raising a whopping $119 million so far.

The World is Changing. The Ethereum DAO Hub What is it?

The decentralized autonomous organization known as the DAO is no more than code that runs a structured governance platform. The beginning of this concept is truly mesmerizing to many as it’s one of the first times this type of infrastructure has been built using the Ethereum blockchain. A DAO is not run like your typical company or large corporation and allows the initial steps of decentralized transparency to take hold with this type of organization. The framework behind the DAO was implemented by the Slock.it the team is well known for working with IoT solutions using Ethereum. 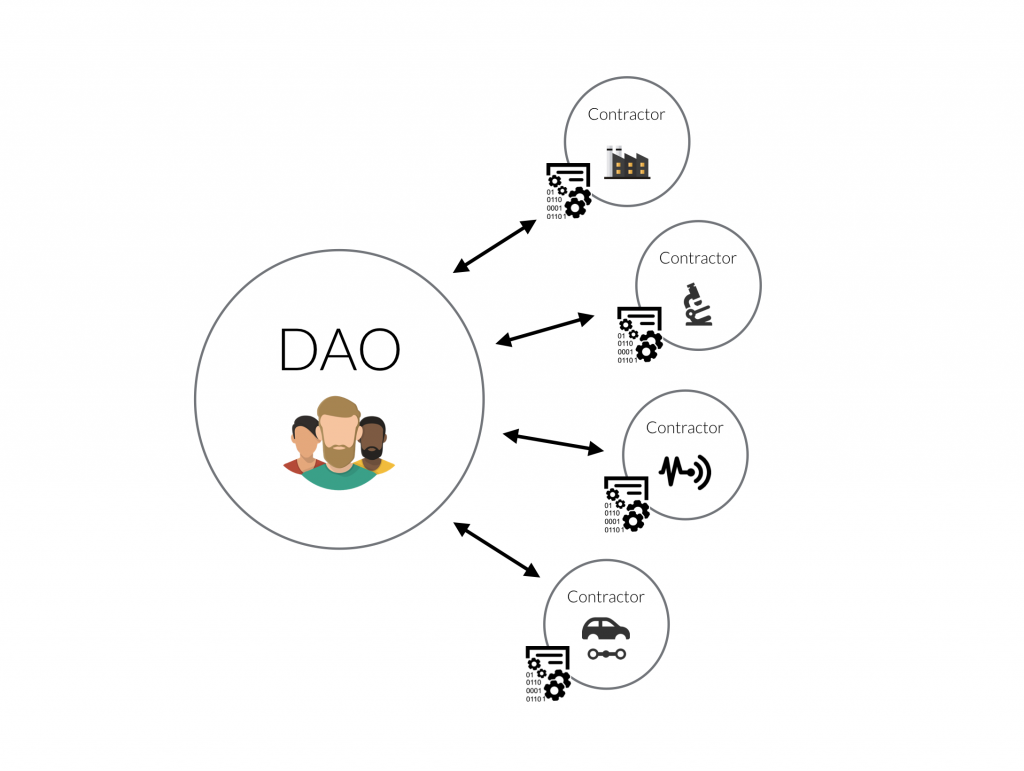 For seventeen days now the DAO sale has been growing big and is making headlines all across both crypto-based media outlets and with mainstream news as well. When it approached the landmark $100 million point, the project became one of the most powerful organizational frameworks based on only code. The hub of the DAO is a series of smart contracts constructed on the Ethereum blockchain and anyone who has invested in its native token has voting power within this newly created system. In the corporate world rules are governed by executives, investors and outside entities which are often found to be quite fallible. Without explicit agreements, these operations can falter to the wayside and manipulate the interests of common investors. However with the spawning of the Ethereum-based decentralized autonomous organization its activity, rules, and voting is determined by the contracts written with the Solidity programming language.

Ether the digital fuel that powers the Ethereum network is also used by the DAO for its functions and operations. When someone wants to start a project and fund it through the DAO, it initiates a “Creation Phase” in which all rules are executed by code. The protocol stores the Ether and native DAO tokens within its framework but “requires a ‘Contractor’ to build a product, write code or develop hardware.” All DAO token holders can become a Contractor and submit a new project but it must be approved for it to initiate a smart contract proposal. The projects white paper states:

“Such smart contracts can be parameterized and enable a DAO to interact with and influence the project it chose to support.” — DAO Hub’s White Paper

What Will Decentralized Autonomous Organizations Do For Society?

The implications of the DAO is pretty huge as it’s a very new concept that undermines the need for third party entities. Many facets of society could use this model and it could reinvent the very mechanisms of infrastructure we rely on. Concepts such as newly formed voluntary governance structures based on actual consent and voting of the participants. A DAO like architecture could remove the current oligarchic system run by a small minority of fallible humans and reform it into a framework based on code and self-executed smart contracts. For the most part, contracts make the world operate but are riddled with costly and needless third-party arbitration such as lawyers, accountants, and board members. The father of smart contracts Nick Szabo once said, “I argue that the formalizations of our relationships — especially contracts — provide the blueprint for ideal security.” 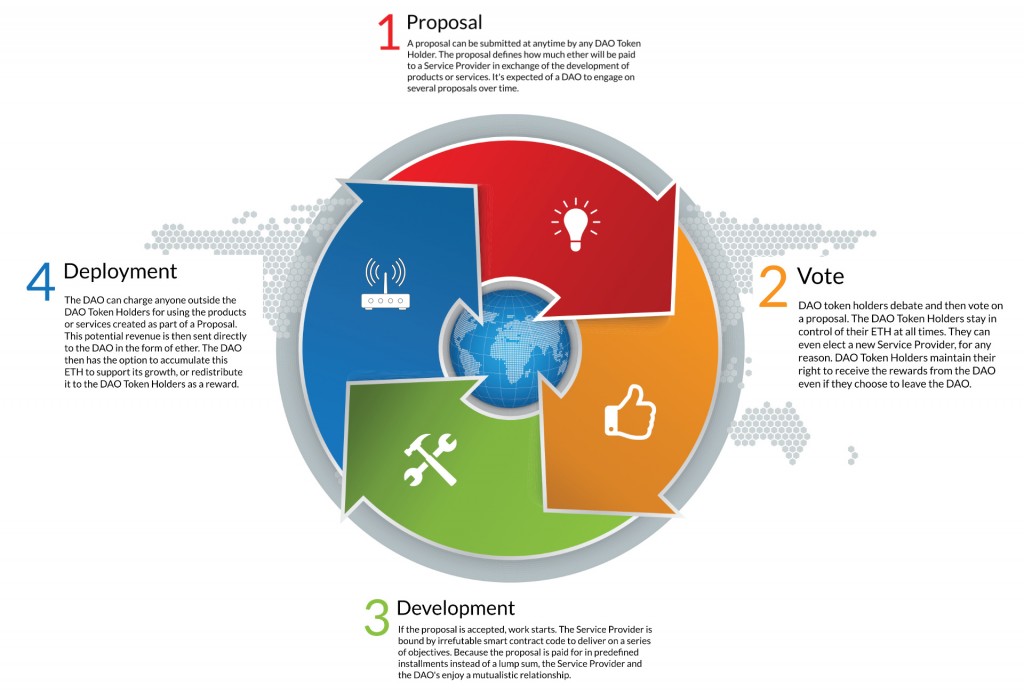 Alongside the change of governance corporate entities could also rebrand into a decentralized autonomous organization as well. It would cut costly overhead that comes with hiring attorneys, massive amounts of paperwork, and logistics that can take weeks to settle. The existing system is quite cumbersome and has been for years; with the introduction of a DAO protocol/community society’s idea of hierarchical roles of importance vanish. Blockchain and digital currency enthusiasts are starting to believe the DAO architecture could replace these traditional corporate models. However, it remains to be seen whether or not it actually will work.

The crowdsale is doing very well but the model actually operating and doing what it’s supposed to is another story for the future. It is just the beginning stages of the popularity of the DAO concept taking hold. Other innovators within the digital currency and blockchain space have also been working similar concepts. Projects such as Swarm, BitNation, and Expanse are others who have dabbled with the idea. Some have discussed the idea to great length and some have initiated their own formations of a DAO as well. There are those that feel the project has room for improvements concerning the current and popular Ethereum DAO. Bitcoinist spoke with BitNation’s Susanne Tarkowski Tempelhof and she gave her opinion of the DAO introduced by the Slock.it team saying:

“I’m tremendously excited about the remarkable achievement of The DAO, it sets a successful precedent for all of us to operate in a post-centralisation world where only a few powerful entities, may it be banks, governments, or venture capitalist funds, could tell us how to live and operate. Although much writing and ideas been circulating about it for years, in my opinion, The DAO seems to be the first ones to have brilliantly popularised and implemented it (at least as far as the crowdsale and GUI goes), which is definitively a game changer in this space. When Slock.it first released their code on GitHub, and on various Google doc’s, I jumped on it, like a kid with a new bike, realising it could be a framework for Decentralized Borderless Virtual Nations (BDVNs) – but with some modifications, namely, the removal of democracy. Why remove democracy, one might ask? Isn’t democracy the beacon of all freedom? No, democracy is the rule of the majority, mob rule, stripping away people’s rights —— simply because they happened to be outnumbered. Alexandre Van de Sande, the fantastic MIST developer, and I sat down in January in Rio discussing the pros and cons of a democratic organisations, and how to deploy the Ethereum DAO code in the DBVN context. The rational conclusion to draw from it, is that different organisational types suits different personality types. And that’s the beauty of The DAO. They set a precedent, just like Bitcoin, that everyone can follow, or fork, and make their own. Just like we’re doing with our Virtual Nation, who we hope will operate in compatibility and computability, with The DAO, and the DAOs it will empower. The future is very bright, indeed.” — Susanne Tarkowski Tempelhof Founder & Chief Unicorn of BitNation

The world is seeing a whole lot of new ideas and concepts such as decentralized autonomous organizations, permissionless cryptocurrencies, and architecture built with smart contracts are growing more popular every day. Society’s norms are changing with each new technological step towards a free market and a DAO is one of these steps. Surely there will be more but Ethereum’s current model is proving to raise eyebrows with its immense funding of capital. Now all that remains is putting the code to the test.

What do you think about decentralized autonomous organizations and the current Ethereum DAO version? Let us know in the comments below.

** Disclaimer the spot price of Ether also will determine if the project continues to hold the #1 crowdfund spot.