According to a Telegram channel tracking signals formed by the Tom Demark Sequential, Tron is primed to move lower in the days ahead.

The Telegram channel shared the chart below on August 10th. It shows that TRX’s U.S. dollar pair on Bitfinex formed a “Sell C-13” as per the Tom Demark Sequential, suggesting that a bearish reversal is imminent.

The Tom Demark Sequential is a time-focused indicator that prints “9” and “13” candles at inflection points in the trend of an asset.

It’s important to note that previous Tom Demark Sequential signals for Tron did not play out. The last “9” candle, for instance, was followed by a 15% rally, while the last “13” candle preceded a bearish reversal when it was meant to precede a rally. 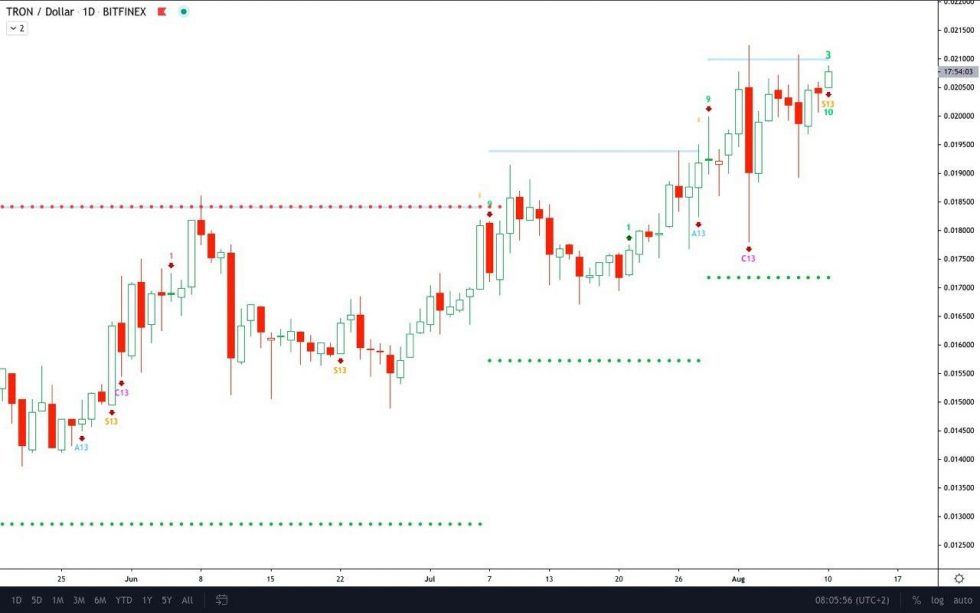 Analysts, though, are expecting for Tron to break higher rather than retrace. At least three traders noted that TRX is primed to rally higher as it crosses above pivotal resistance levels in the $0.021 range. One of these individuals commented:

“$TRX Looks almost ready, I reckon it could start moving next week, if that doesn’t happen, and we get more accumulation, we have another pivot coming Sept. 28th.”

Bitcoin May Outperform All Altcoins For the Time Being

Strength in the price of Bitcoin may likely suppress any opportunity Tron gets to rally.

Author of “An Altcoin Trader’s Handbook,” Nik Patel, said that altcoins could strongly underperform Bitcoin until BTC sets a new all-time high. Patel is an altcoin trading savant, garnering a large following due to his calls on this segment of the cryptocurrency market.

This was echoed by Mohit Sorout of Bitazu Capital. That analyst told Bitcoinist that BTC will underperform