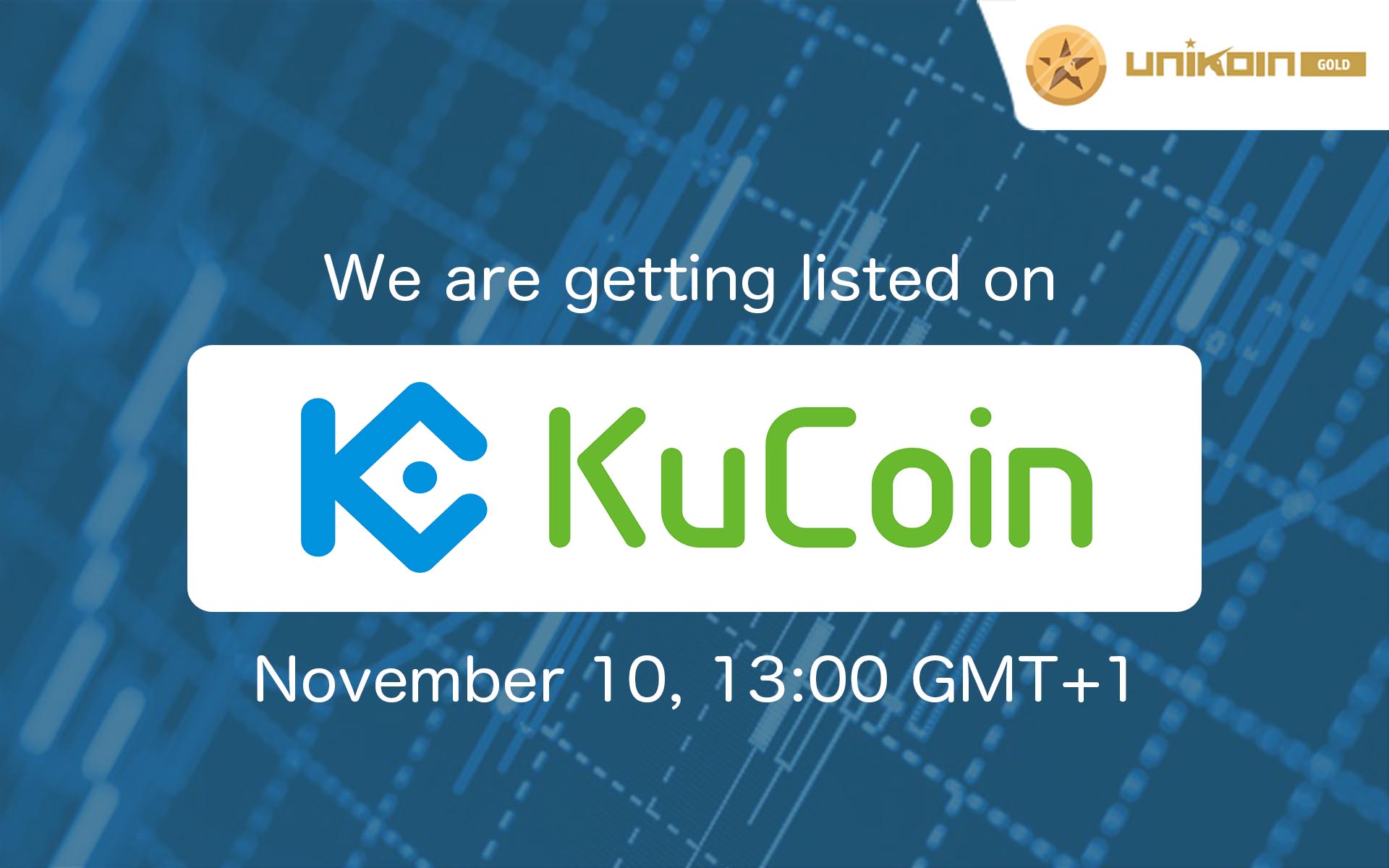 November 9, 2017 – As any users can attest, KuCoin’s offerings in the cryptocurrency and token space extend well beyond the typical reaches of online exchanges, adding far and away the most high-quality projects and priding itself on unique variety and token excellence. On November 10, 2017, UnikoinGold will join that prized stable of tokens users may trade on KuCoin.

KuCoin traders will have access to UKG/BTC and UKG/ETH upon listing, leading them into a two-way exchange to and from the world’s largest esports and gaming token with soon-to-launch applications worldwide.

UnikoinGold recently closed its historic crowdsale which cleared 112,000 ETH and sold over 127,000,000 UKG, making it the most successful token sale in esports and gaming history. The token will be used in a variety of functions on Unikrn and partner platforms to enhance competitive esports, game streaming and casual play of the world’s largest video games. As the decentralized token of esports and gaming, users worldwide will have their esports, streaming and gaming experiences enhanced by countless experiences and rewards already being rolled out on Unikrn and partner platforms. UnikoinGold token will also have widespread esports and gaming betting applications in regulated regions.

Unlike many ICO’s, UnikoinGold already has a working platform and an active user base in two of the world’s fastest-growing industries: esports and gaming. Also unlike other tokens, Unikrn already began rolling out gaming applications even before token delivery, with UnikoinGold CS:GO tournaments in Europe.

Unikrn is already the worldwide leader in esports betting. Users can bet legally, for free, anywhere in the world. Unikrn also offers real money betting in Australia and the UK, with a recently announced Maltese license allowing them to begin a European rollout in 2018. Their expansion into the crypto space is an unprecedented evolution fusing esports and gaming with decentralized tokens and cryptocurrency.

Try out the platform at https://unikrn.com/. UnikoinGold and its Crypto platform are run by Unikrn’s wholly-owned subsidiary, Unikrn Bermuda Ltd.

Established in 2014, Unikrn is leading the world of bookmaking for esports and video games. In the interim years, Unikrn has established itself as an endemic esports brand and become woven into the fabric of this rapidly growing community. Their contributions and assets include team ownership, tournament series, multiple original content platforms, sponsored community creators and a works with casinos to bring in modern gaming audiences. The company’s close relationships with gambling powerhouses such as Tabcorp, Australia’s largest betting company, have positioned them as the definitive bridge between the new world of competitive gaming and the old world of sports bookmakers and casinos.

KuCoin is a newly-launched cryptocurrency exchange; it started operations in September 2017 and is already making a big impression on traders and users thanks to its innovative listings, partnerships and user rewards.

Users can earn rewards in exchange for using the platform and holding the exchange’s token KucoinShares (KCS). Dividends are dependent on the number of coins each user holds and they are paid daily.

Users can also get a discount on trading rates, or earn 40% commission by referring other traders to the platform. In total, KuCoin gives 90% of its trading fee to users, while keeping 10% for a token buyback fund.

The long-term goal of KuCoin is to become one of the top 10 exchanges in the world, they have quickly gained traction by collaborating with many established communities and listing new tokens based on user’s opinions and requests.

They are often compared to Binance thanks to their simple user interface, fast transactions, and good design. At the same time, they have gained notoriety for good customer support which has been well received by traders and users frustrated with larger exchanges’ lack of response to support requests. People have started calling it ‘the people’s exchange’

You can find all announcements about KuCoins future listings here: https://news.kucoin.com/en/category/announcements/

If you would like to get your token listed on KuCoin you can contact them here: http://kucoinform.mikecrm.com/tAssDWK