Ethereum has been struggling to gain any serious momentum over the past few days and weeks.

Bulls have been trying to take control of its price action, but they have so far failed to buck the headwinds created by Bitcoin. Whether or not these headwinds continue mounting should depend largely on BTC’s reaction to $18,000.

One trader is still optimistic that ETH will see further upside in the near-term. He contends that it will soon see a brief accumulation phase followed by a serious breakout rally to $800.

At the time of writing, Ethereum is trading down just over 3% at its current price of $555. This marks a notable decline from daily highs of $580 that were set during yesterday’s rebound.

It is still trading up from lows of $528 set at the bottom of the cryptocurrency’s recent selloff.

Where it trends in the mid-term should depend largely on whether or not the crypto will be able to continue holding above the support at exists at $530 and $500.

One analyst is still optimistic about Ethereum’s mid-term outlook, noting that there’s a strong possibility that it sees significantly further upside in the mid-term.

He spoke about this in a recent tweet, explaining that he expects it to see a brief accumulation phase before it is ultimately able to rally higher.

“ETH isn’t quite ready but once again. All you’ll have to do is do nothing to make the most. The real markup is coming. Still have a little more time to accumulate but it’s going to get absolutely sent.” 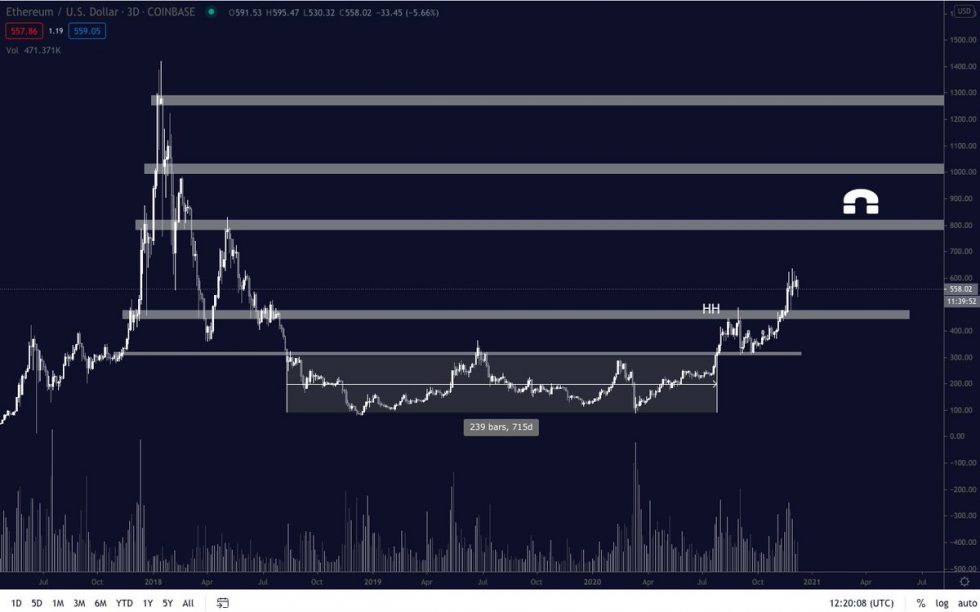 Bitcoin will undoubtedly play a large role in Ethereum’s near-term price action, making it imperative that the benchmark crypto finds some stability in the near-term.