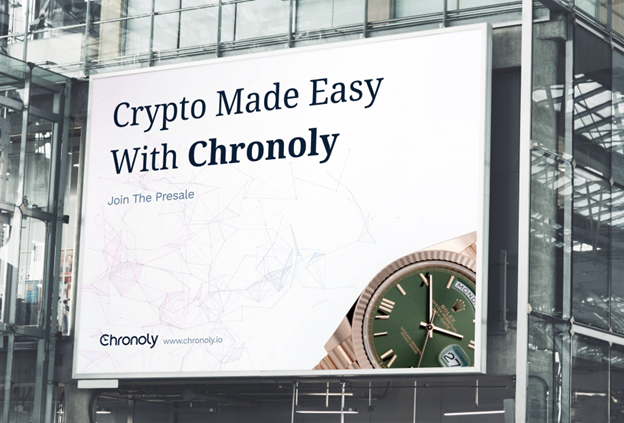 In April 2021, as part of the mind-boggling rise in the popularity of NFTs, the Bored Ape Yacht Club (BAYC) launched with massive success. It instantly became one of the most talked about projects in the space. The team behind BAYC launched the ApeCoin DAO, allowing users to have their say on how the project was being run. Since its launch, however, ApeCoin has stayed largely bearish, despite its loyal fanbase.

Today, we’re going to look at ApeCoin’s price, where it is headed, and another NFT-based coin that investors are pouring their money into rapidly called Chronoly.io (CRNO).

ApeCoin (APE) is a governance token representing the BAYC ecosystem, allowing users to vote on who’s on the board, where funds should be allocated, and what projects should be pursued. It also gives holders exclusive access to the APE ecosystem, full of games, events, and merchandise.

But based on its strong ties to the NFT community, it’s inextricably linked with how NFTs are performing. As the crypto bear market took hold in early 2022, NFT sales plummeted and fell out of the public view. After seeing a revival in April 2022, climbing from $11 to $27.60 in 11 days, the bears pushed ApeCoin down hard.

It fell nearly -90% between the end of April and mid-June, burning investors who were hopeful that APE would be the future. Prices bottomed out at around $3.20. Alongside the rest of the crypto market, APE made a slight recovery.

But the recent sell-off in August was severe, dropping from $7.70 to $4.85 in two weeks. This drop is starting to look like a continuation of the overall downtrend in APE, and it seems like further declines are on the way for BAYC’s loyal fans.

Even with the dampening of the overall NFT market, one NFT token is weathering the storm exceptionally well. This is likely because it’s connected to the real world, not drawings of monkeys.

This project is Chronoly.io (CRNO), a decentralized marketplace for trading shares of luxury watches from some of the most exclusive brands, such as Rolex, Audemars Piguet, and Richard Mille, and they’ve seen bulls pick up tokens at a pace never seen before.

These watches are actually held in secure bank vaults worldwide, as proven by third-party audits. There’s a select number of fractional NFTs that Chronoly.io (CRNO) has minted, and their shares can be had for as little as $10. No longer are you speculating on digital art; you’re investing in the proven market of luxury watches, which is set to grow by billions over the next few years.

In fact, they’re already up 560% since May, and a further increase of 1000%+ is forecast within the next month. They began trading for $0.01 and are now worth $0.066. By the time presale ends at the end of September, many expect prices to hit general sales at $0.50 to $1 – a much better return than ApeCoin could hope to achieve.