In the Battle for Acceptance, has Bitcoin Accomplished What Gold Can’t?

Once upon a time, it would have been absurd to compare bitcoin to gold. One was a new cryptocurrency with little to no adoption, and the other was a precious metal and one-time backer of world currencies. The ensuing years have seen Bitcoin grow to become one of the most precious stores of value, even surpassing that of gold.

After nearly two decades of trading in the $350 – $500 range, in 2002 gold bottomed and it took nine years for it to make a comeback, reaching a record high of around $1900 in September of 2011. It was a slow but respectable gain of over 550% but over time, the commodity has given up a significant portion of the gains. By contrast, at the time of this writing, Bitcoin, has recorded gains of nearly 12,000% in less than a third of the time.

In 2011, investors were abandoning their gilded ship in droves. The hard money camp were the only ones who still believed in gold as a currency, while the masses refused to view or treat it as such. As a result, even hard money supporters began to dwindle. The “Top-Down” path to gold being adopted as a currency ultimately failed because there was no support at the “bottom” (the masses).

Bitcoin, on the other hand, is experiencing a “Bottom-Up” adoption route. It already has large-scale support among the masses (the “bottom”) and that support has started to spread upward, to businesses, the financial sector, and even some governments. 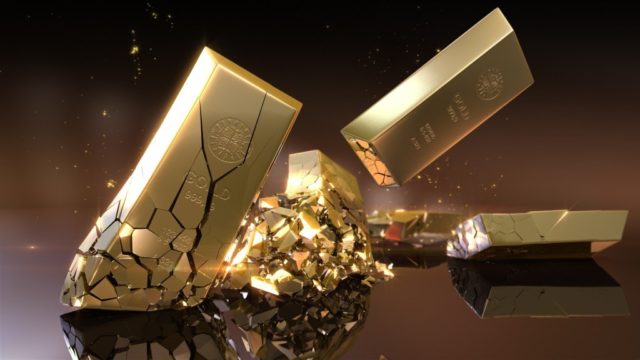 What Does this Mean for the Precious Metal?

The declining performance of gold since it hit its record high in 2011 hasn’t been a good sign. The precious metal stands no chance, at least in terms of mass perception. Many people view it purely as an ancient relic that has no place in today’s modern monetary system.

While the price of gold has inched a little higher from its 5-month low ahead of this week’s meeting of the U.S. Federal Reserve, overall demand continues to decline. The Bitcoin market, on the other hand, is expected to continue to grow – especially with the recent addition of bitcoin futures trading to the mainstream financial sector.

Given these factors, it is entirely possible that Bitcoin will succeed where gold has failed and go on to be accepted and treated as a currency.

Do you think Bitcoin will ever be accepted as a currency? Will the gold market ever recover even a portion of its former glory? Let us know in the comments below.