Binance, the cryptocurrency exchange platform behemoth, will support the ICON ICX mainnet token swap. The platform announced the move in a blog post on its website on June 13, 2018. The announcement likely brings to an end the confusion over the status of ICX mainnet and ERC-20 ICX tokens.

Details of the Token Swap

According to the Binance statement, the platform will suspend all ICX deposits and withdrawals beginning June 20, 2018. ICX holders have until that time to transfer their ERC-20 ICX tokens to Binance. The platform will handle the necessary back-end technical processes for the token swap. The exchange also revealed that ICX deposits and withdrawals will recommence once the mainnet stabilizes.

The ICON mainnet launched on January 24, 2018. Based on the original ICON roadmap, the token swap was supposed to take place in May 2018.  Delays over the swap have heightened apprehension among ICX holders, some of whom purchased the tokens during its all-time high (ATH) of $12.

Part of the reason for the delay was the inability of the project team to decide on the exact mechanism for carrying out the token swap. Back in April 2018, the team offered two possible routes – via its ICONex wallet or through selected exchange platforms.

In addition to the token swap, Binance also announced a new ICX/USDT (Tether) trading pair. According to the platform, trading opens for the cryptocurrency pair on June 13, 2018.

At the time of this writing, the price of ICON is $1.90 – ICX tokens are down by more than 6 percent in the last 24 hours despite the Binance token swap announcement. For a brief period after the announcement, ICX spiked to $2.06 but has since dropped below the $2 mark. 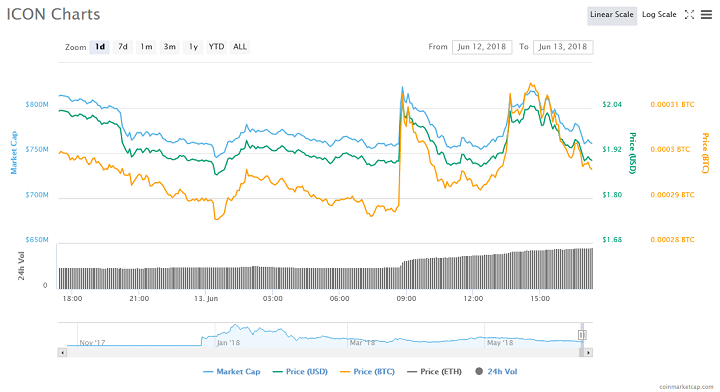 ICON is an interchain blockchain network that seeks to enable seamless interaction between different decentralized networks. With ICX as the intermediary token, ICON aims to allow networks like Bitcoin and Ethereum to communicate without any loss of autonomy for either blockchain.

The project also wants to provide interchain transaction services where a DEX reserve determines the exchange rates of cryptocurrencies. According to CoinMarketCap, it is the 23rd-ranked cryptocurrency, with a market capitalization of $762 million. ICON recently inked a massive partnership with LINE to create ‘Unchain.’

Will ICX investors be able to rest easier now after the Binance announcement? Share your views with the community in the comment section below.