Bitcoin is currently facing some lackluster price action as it trades just below $12,000. Bulls attempted to shatter this level earlier this weekend but failed to do so.

Following the slight rejection seen here, the cryptocurrency fell back into the trading range that it has been caught in since last Saturday.

Bulls are also trying to hold Bitcoin above $11,800 before its daily close takes place. The cryptocurrency has been unable to post a sustained close above this level despite its recent strength.

One trader is now noting that he anticipates BTC to see an extension of its consolidation phase in the near-term, with this ultimately resulting in a breakout rally towards $13,000.

This marks a slight decline from daily highs of $12,050 that were set yesterday around this time when buyers tried to shatter the resistance sitting around this price level.

They were unsuccessful, however, and the crypto is now hovering right around where it has been for the past week.

This is a level of historical importance that Bitcoin has struggled to close above over the past couple of weeks.

While speaking about this level, one analyst explained that he expects to see turbulence until this level is closed above.

“Moon is above blue, till then expect turbulence,” he said while pointing to the chart seen below. 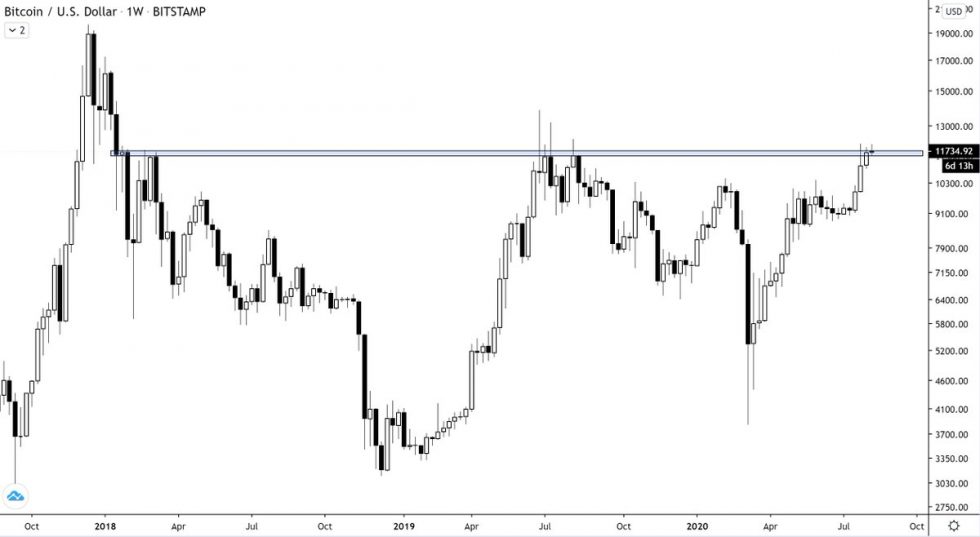 Analyst: Expect BTC to Consolidate Further Before Exploding Towards $13,000

Another analyst explained that it might be some time before Bitcoin can rally past its near-term resistance.

He believes that it will first consolidate, and then post a breakout rally that sends it up towards $13,000.

“Bitcoin: Smaller timeframe chart explaining what just happened. Essentially, we’re back in to the ranging gameplan. Larger timeframe; still expecting such a scenario. If we break $12K however, I assume we’ll see $13k,” he said.

How Bitcoin continues responding to this level in the coming hours and days should provide insight into its long-term significance.