Bitcoin Price Could Dump to $5000 in the Near Future, Here’s How

Bitcoin Price Could Dump to $5000 in the Near Future, Here’s How

Bitcoin price is getting battered as if there’s no tomorrow. Following a huge red weekly candle closure, the benchmark crypto was crushed through another support zone in a plunge down to $6,600. BTC is now in a very dangerous territory which could result in a drop all the way back to $5k – here’s how.

Bitcoin Price Back in $6k Zone

When things turn south in crypto markets it happens in the blink of an eye. As positions get liquidated en masse, the short-selling avalanche gathers pace and that is exactly what has been going on over the past week.

The weekend saw bitcoin price take a breather and hold around the $7,200 level for a while but the bears came out again in force on Monday morning as BTC dumped to a six month low just above $6,600 according to Tradingview.com.

The RSI on the hourly chart is massively oversold so there may be a slight recovery here, but further losses are looking likely.

The digital asset is getting hammered hard with a 7% loss on the day, 22% pounding since the same time last Monday, and a 52% demolition since its 2019 high five months ago.

The failure of the weekly candle to close above $7k has analysts rattled and predictions of a fall below $6k are now starting to look like a harsh reality. Trader and analyst Josh Rager has eyed a support level for a bounce in the low $6k region;

“Funding still positive, so not overly bearish at this point as $6300s would be an eventual target here, the only question is does it bounce back up to high $7ks before or after the next drop,”

Funding still positive, so not overly bearish at this point as $6300s would be an eventual target here, the only question is does it bounce back up to high $7ks before or after the next drop pic.twitter.com/UkNj7kJT9W

This takes into consideration the long spell of consolidation bitcoin had at the $6,400 level last year. This year however there has been no such support or resistance in this range which could result in a plunge back below $6k pretty rapidly.

A more worrisome scenario would be a return to $5k and this figure is significant because it is where the 200-week moving average lies. This technical indicator served as solid support throughout the 2018 crypto winter when bitcoin dropped to its low below $3,200. 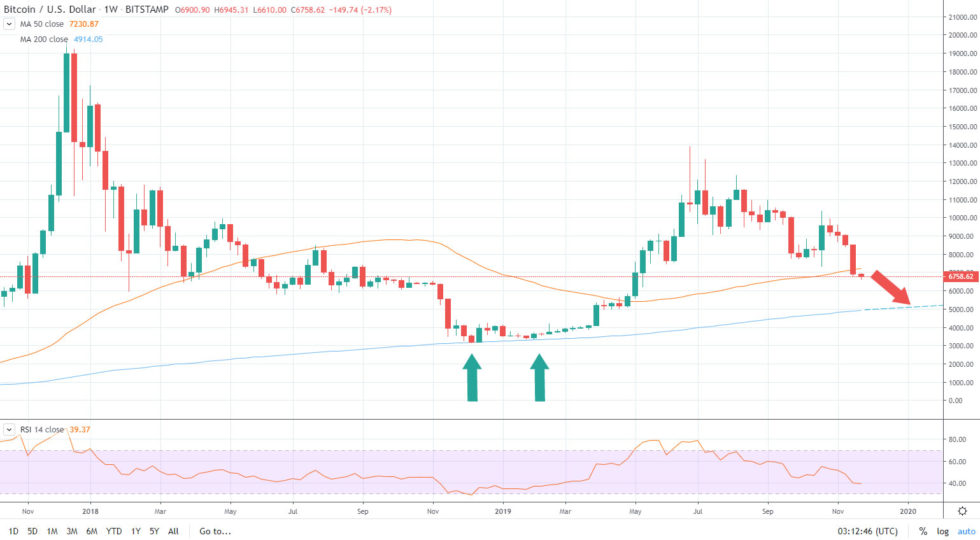 If this pattern is to repeat bitcoin price may well fall back to that support at $5k and hold there before any moves into positive territory occur.  This at the moment is the worst-case scenario for bitcoin prices, but we have been there before and came through it.

Will bitcoin price dump to $5k this year? Add your comments below.

Bitcoin has bounced strongly after plunging as low as $11,100 on Tuesday. As of the time of this article’s writing, the leading cryptocurrency trades for $11,600 on leading...