Crypto Exchange BitMEX has announced that it has signed a multi-year sponsorship deal with Italian soccer giant AC Milan.

As per an announcement on the AC Milan website, crypto exchange BItMEX has become the soccer club’s “first-ever sleeve partner.”

AC Milan is an Italian soccer club with a rich history as one of the powerhouses in Europe. The team’s trophy cabinet includes seven UEFA Champions League titles, the second most in the continent.

BitMEX is the leading crypto exchange in the derivatives market. The platform is the mind behind Perpetual Swap, the most traded derivatives product in cryptocurrency.

As part of the deal, the club’s kits will feature the firm’s logo on their sleeve. The website post also reveals that the exchange is now AC Milan’s “Official Cryptocurrency Trading Partner.”

“The BitMEX brand will feature on the sleeve of both the men’s and women’s team playing kit in all competitions,” clarifies the club. “Including the UEFA Champions League, and on the sleeve of the Rossoneri’s eSports team, AQM – marking another first for the Club.”

The sponsor partnership marks the first time the crypto exchange has ventured into the soccer and eSports sphere.

Our partnership with AC Milan is the start of a hugely exciting new chapter for BitMEX as we look to ramp up brand awareness and increase understanding of crypto. AC Milan is one of the world’s most progressive football clubs, and combined with its rich footballing heritage boasts extraordinary reach and engagement with fans globally.

The sleeve logo is set to make its debut on August 23, during the first Serie A game of the 2021/22 season. The match will feature the team taking on Sampdoria in Genoa.

Similarly, crypto sponsorships aren’t new for soccer clubs either. Just last month, AC Milan’s eternal rivals Inter Milan announced that socios.com logo will feature on the front of their kits in the 2021/22 season.

Below is a chart that highlights the trends in the price of Bitcoin over the last three months: 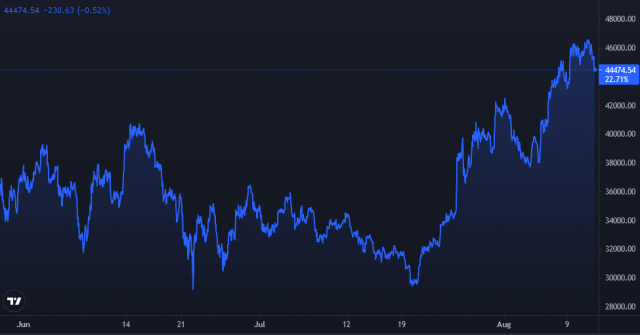