EmerCoin (EMC) is a decentralized cryptocurrency that enables international payments for practically zero fees and without reliance on a third party. Made for the real world, it is completely global and decentralized. EMC is developed by ppc.fixx.ru team that has specifically designed it for real world transactions, employing emergent technologies to create a new currency with both long-term and real broad application. Emercoin was the first in the history of crypto currencies, to used STUN protocol that allows obtaining external IP addresses, instead of WEB-services.
Emercoin development is implemented utilizing a building on proven code technique, originally based on Bitcoin and Peercoin technology, EmerCoin continues to advance the codebase and utilization of it into new areas.

EMC is not a new cryptocurrency but its technology is still much unexplored and presents an enormous potential when it comes to DNS based protocols infinite applications. The EmerCoin Team has absolute confidence in its project and has tried to give a new and more appealing look to the whole project. The team also implemented the [email protected] platform within it’s mining structure to increase the coin’s intrinsic value.

EmerCoin’s NVS system is similar to that as implemented by NameCoin, but with superior features. The NVS system will also support a variety of yet-to-be-announced services in addition to DNS.
EmerCoin’s DNS system is completely decentralized and not reliant on ICANN or any governing body – domains can be reached via any DNS service that has integrated EmerCoin’s software into its DNS tree.
At this time, the *.coin and *.emc domain zones can already be reached through any supporting DNS gateways such as emergate.net, making them comparable to dynamic DNS. 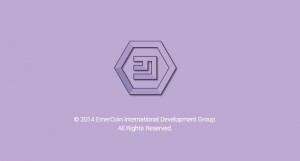 Emercoin tries to present an intrinsic purpose while establishing to sponsor hi-tech internet, game and research projects with a real scientific application; users will be allowed to earn EMC with Stanford University’s [email protected], giving the mining process a real “intrinsic purpose”

Although, coins such as NameCoin and PeerCoin haven’t gain much traction, they are extremely good examples of what can be made with this type of technologies, and EmerCoin seems to be the perfect hybrid to match a currency with so much potential.

With the emergence of digital currency acceptance and wider crypto currency related technology adoption, EmerCoin really presents has a strong candidate not only for its improved and perfected specifications but also for its immense potential for future applications.

Disclaimer: The author does not hold investments in EMC
Link to source: 1, 2
Photo source: Emercoin