Ethereum and the entire cryptocurrency market have lacked momentum in recent days, with the sharp move up seen by the aggregated market last week losing its strength after Bitcoin reached the mid-$11,000 region.

Ethereum – which was just recently able to break above $380 – has since drifted below this level and could be in a somewhat precarious position.

Despite its lackluster price action over the past couple of days, one analyst is expecting imminent upside.

He points to a recent support-resistance flip of $375, noting that a move towards $420 may be right around the corner.

At the time of writing, Ethereum is trading down just over 1% at its current price of $375. This is around where it has been trading all morning, with bulls recently losing the support it previously had at $380.

The decline beneath $380 was technically significant, as this has long been a pivotal level for the cryptocurrency.

Where it trends next will likely depend on Bitcoin, as the benchmark crypto is currently attempting to dodge the headwinds that are being created by the stock market’s decline today.

Analyst: ETH Could Rally Towards $420 if It Holds One Level

While sharing his thoughts on Ethereum’s current technical outlook, one analyst explained that he is watching for a move up to $420 in the near-term.

He notes that ETH is currently trying to flip the $375 level into support, which could boost it higher.

“Nice SR flip forming on ETH here imo, i think we can push higher towards 420…which is the 0.618 before I’ll re-evaluate,” he said. 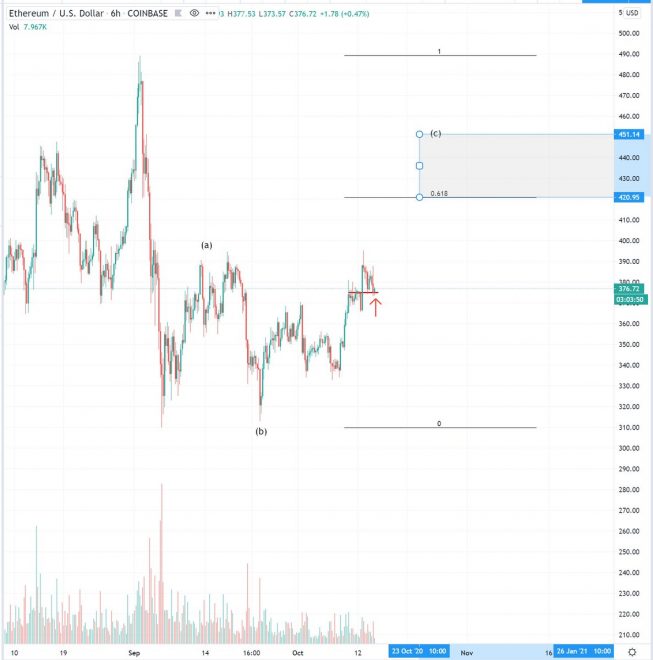 Where Bitcoin moves in the coming few days should provide some serious insight into where altcoins like Ethereum will trend next.

If BTC drifts below $11,000, it could have grave implications for ETH.