Ethereum and the entire cryptocurrency market are flashing some mixed signs. While Bitcoin is rallying towards $11,000 and showing immense signs of strength, ETH and other major altcoins are remaining somewhat stagnant.

Where the market trends in the near-term should have some serious implications for the smaller altcoins that have been stealing investors’ attention over the past few months.

If ETH faces a rejection at the resistance region between $385 and $400, it could stop the DeFi bull run in its tracks, and even create a headwind for Bitcoin.

That being said, BTC’s current strength may prevail, and help lift Ethereum past this crucial region.

Ethereum Struggles to Keep Up with Bitcoin

At the time of writing, Ethereum is trading down just over 1% at its current price of $373. This is around where it has been trading throughout the past day, following a couple brief dips to $350.

At the time, these dips seemed to put its mid-term strength in jeopardy, but bulls stepped up and ardently defended against it seeing any further downside.

Where it trends next now depends primarily on its reaction to the resistance region that starts around $380, as well as Bitcoin’s reaction to $11,000.

Analyst: ETH Could Plunge to Sub-$300 if It is Rejected at Key Resistance

While speaking about the resistance that exists just ahead of where Ethereum is currently trading, one analyst explained that it will likely be the sole factor that determines its near-term outlook.

He specifically notes that a rejection here could spark a sharp move to the sub-$300 region.

“ETH is likely headed to the top of this channel here at $400 and from there comes the moment of truth. I favor the RED path, but a HTF close above the RED region would force me to flip bullish. This is going to get interesting,” he said. 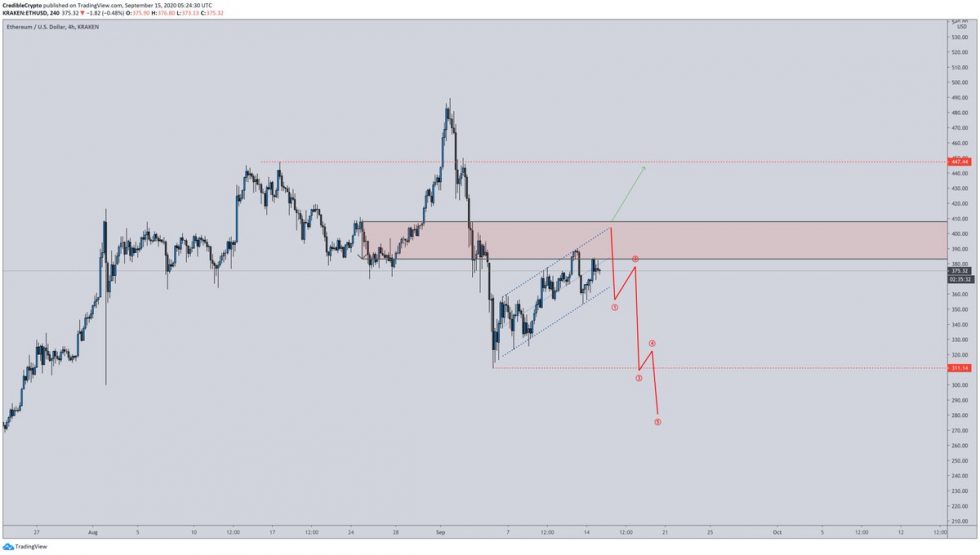 The coming few days should reveal insight into just how significant this price region will be for where Ethereum trends in the coming few weeks.