Ethereum has declined significantly from its recent highs, with the cryptocurrency plunging to lows of under $340 earlier today before garnering some significant buying pressure that helped it rebound higher.

The upwards momentum it built following the dip to these lows is starting to stall, however, which may be a sign that further downside is imminent in the near-term.

One analyst is particularly setting his sights on a movement down towards $295 in the near-term, as he notes that the massive buying pressure at this level makes it an obvious mid-term price target.

Assuming it does slide to these lows, a strong defense of this level could be enough to send the cryptocurrency rocketing significantly higher in the near-term.

At the time of writing, Ethereum is trading down over 8.5% at its current price of $353. This marks a notable decline from daily highs of nearly $400 that were set yesterday.

Earlier this morning, the cryptocurrency’s price dived to lows of $332 before it was able to find some strong support, at which point it was able to rebound up to highs of $360.

The resistance here proved to be strong, and it is now showing continued signs of weakness.

Analysts believe that this may mark the start of a further-reaching decline, which could send ETH and other major digital assets reeling significantly lower in the mid-term.

One analyst explained in a recent tweet that he believes the cryptocurrency may plunge towards $295 before it can climb any higher.

“ETH / USD: Truth of the matter is that our region around $295 is the strongest level of support we have on weekly plus timeframes, this would be a major buying region… Personally I have added here at $350, this was my first buy fill in the past few months, next bid $320!” 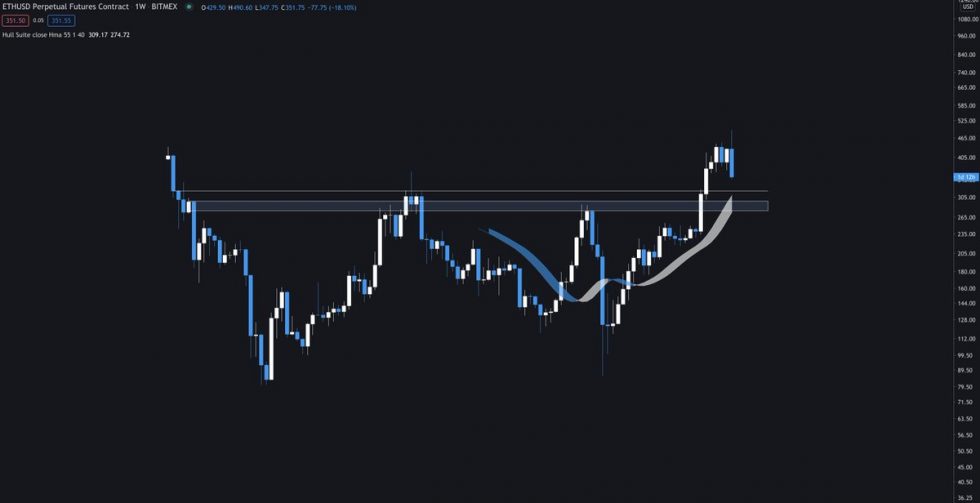 If Bitcoin loses its support at $10,000, it will likely create a headwind that forced Ethereum significantly lower in the days and weeks ahead.