Goldman Sachs Reaffirms Interest in Bitcoin and Other Cryptocurrencies

Acquiescing to its clients’ demands, Goldman Sachs reasserted its interest in joining the cryptocurrency bandwagon, during its last earnings call.

Clients have been requesting the multi-national finance giant Goldman Sachs to participate in the cryptocurrency trading industry. Marketwatch reports that on the earnings call of December 17, 2018, Chief Financial Officer R. Martin Chavez underscored that the most exciting facet of the current craze is blockchain technology:

And so on the back of our clients asking us, will you offer clearing in these contracts, well, we’re in that business of client facilitation.

And so we want to respond to those client requests, and we have. And we’re in also the business of being careful with our shareholders’ capital, and so we’re doing that with extreme prudence and caution as we learn.

Chavez also referred to the possibility of Goldman Sachs trading individual cryptocurrencies. In this regard, he acknowledged that Goldman Sachs was considering several issues that would have to be addressed first:

Being a part of the industry, we’re working on all of that. Custody is a part of it. And it’s a very complex one. So it’s really too early to say how that will evolve for the industry or for ourselves.

Bitcoin is a volatile asset, and therefore it conveys risk. However, Goldman Sachs clients do not seem to be too risk-adverse according to a survey.

Recently, more than 1400 Goldman Sachs clients participated in a Marquee QuickPoll survey designed to ascertain their sentiments on the financial market 2018. Survey participants expressed their opinions on treasury yields, gold, and Bitcoin. As a result, the survey revealed:

The overall sentiment was extremely bullish for risk assets, with almost 60 percent of clients rating equities as their investment of choice for 2018.

Regarding Bitcoin, the survey produced surprising results, according to Oscar Ostlund, Chief of New York FX Market Strats in the Securities Division. For example, participants were asked, “Where do you see Bitcoin by the end of 2018?” Participants responded as shown below: 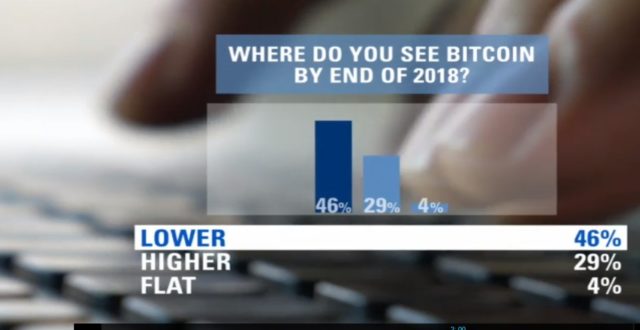 Interest in Bitcoin and its technologies is forcing big financial institutions to seriously consider adding these assets to their portfolios. As The Wall Street Journal reported last October, a Goldman spokesman said:

In response to client interest in digital currencies, we are exploring how best to serve them in this space.

The expansion of Bitcoin and other cryptocurrencies will most likely continue to encourage the clients of institutional investors to push for novel and ambitious crypto-based financial solutions.

How do you think Goldman Sachs’ Cryptocurrency Trading Desk will impact Bitcoin? Let us know in the comments below!