Following President Donald Trump’s announcement that the US would pull out of the Iran nuclear deal, the Iranian rial crashed from $0.00003 to $0.00002, or 50,000 rials to the dollar. Will this cause Iranians to turn to Bitcoin and other cryptocurrencies?

Iran’s economic hardship heightened by sanctions and the US withdrawal from the nuclear deal will cause Iranians to buy more cryptocurrencies, said Weiss Cryptocurrency Ratings analyst Juan Villaverde in a blog post today.

Millions of Iranians are panicking. They fear not only renewed sanctions but also economic collapse and financial repression. Many more are scrambling to find safe refuge for the little money they have left.

Iranians have already spent more than $2.5 billion on cryptocurrencies, the Iranian Parliament’s Economic Commission told local media earlier this month. Villaverde said this pivot to crypto is only the beginning.

In a statement made to Bitcoinist via e-mail, Villaverde said:

You can expect the same to happen — in much bigger amounts — in the wake of any banking or monetary crisis in the future. 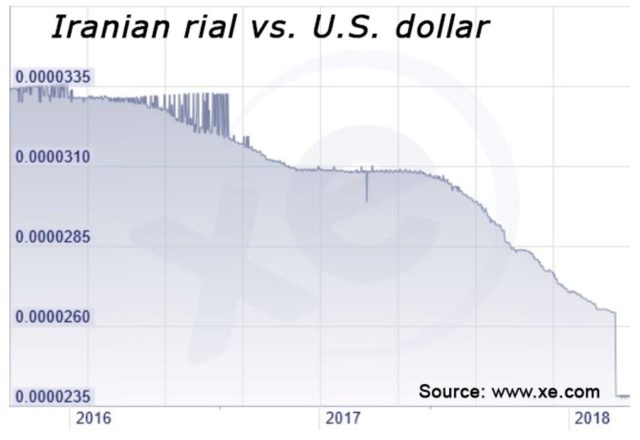 Iran’s tough economic situation will force the government to issue capital controls, which could be devastating for the assets people hold, Villaverde said. These controls could involve printing more money or replacing bank savings with another currency, resulting in devaluation.

But Villaverde said cryptocurrencies are “emerging as a beacon of hope for those living in financial turmoil or under the dark cloud of strict capital controls” since they don’t bar you from accessing or trading with anyone on the network.

The Iranian government has voiced concern about cryptocurrencies and has banned banks from using Bitcoin. Mohammad Reza Pourebrahimi, chairman of the Economic Commission of Iran’s parliament, told local news outlet Ibena that cryptocurrencies jeopardize the country’s banking system because of their lack of transparency and support.

He said the $2.5 billion Iranians have spent on cryptocurrencies represent “digital currency activists [who] enter this arena because of the huge benefits and speculation.”

But Pourebrahimi did confirm the Iranian government is in the process of creating its own cryptocurrency. And Iran’s minister of communication and technology, Mohammad Jayad Azari-Jahromi, told state news agency IRNA late last month that the country’s ban on cryptocurrency would not prevent its own domestic virtual currency.

Last week, at a joint meeting to review the progress of the [local cryptocurrency] project, it was announced that the experimental model was ready.

Do you think Iranians or citizens of other countries facing economic hardship should turn to cryptocurrency? Tell us in the comments!