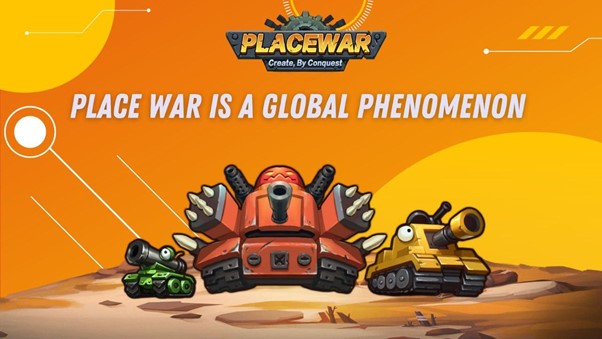 From east to west, PlaceWar is a global phenomenon!

PlaceWar is a multi-chain decentralized strategic play-to-earn social gaming universe with fascinating artillery gameplay that allows players to develop and define the view of the in-game world via conflicts and alliances.

PlaceWar, inspired by Worm and r/place, is a gamified and open Internet culture metaverse that puts users in charge. You may expect a gaming experience unlike any other Play-To-Earn game you’ve played before. They blend warfare and creativity while also ensuring that an incentive structure supports both. PlaceWar may now be found on numerous blockchains, including Binance Smart Chain, Polygon, and Conflux.

PlaceWar is intended to allow users to add their own UGC and modify the game’s look. The development team diversifies the P2E mechanism to guarantee that the participants are various. They also connect the UGC creation capability to fundamental gameplay components like fighting and the P2E system to promote player involvement.

PlaceWar is more than just a player-versus-environment game. PlaceWar was designed to be a gamified Internet culture metaverse and an open environment for gamers and creators in general, not only in the cryptocurrency realm. With a viable and lucrative enough Play-To-Earn system to enable it, users may enjoy the games and express their creativity.

Furthermore, PlaceWar is designed to become a community-driven game, which is considered vital to the game’s long-term success. The Pixel system in PlaceWar allows players to participate in the development of content. Pixel phalanx, inspired by the spirit of r/place, allows players to display their designs. They will also be able to personalize the tank, defender, and structure designs, as well as the maps and game styles. PlaceWar will stimulate the creation of helpful tools and SDKs to help in this attempt. Through PlaceDAO, players may vote on ideas they favor, creator campaign winners, the admittance of new tank model designs, and even the regulations of a new season.

More proposals for microDAO toolboxes to assist guilds in building and managing their DAOs are in the works. 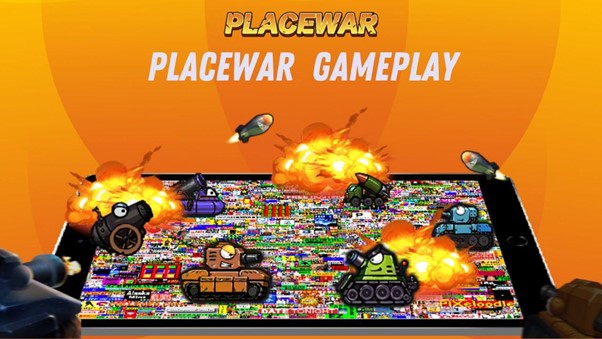 Defenders: Pixel’s self-defense drones are known as Defenders. They may respond to an invading war automatically 24 hours a day, seven days a week.

The player as an NFT owns every defender, and the maximum number of defenders that may be deployed is three. If no defenses are deployed, the invaders will triumph quickly.

PlaceDAO is the decentralized governance body of PlaceWar. PlaceWar has a social DNA that will allow PlaceDAO to become a chamber for players to join alliances or declare wars since large-scale paintings demand teamwork. Players propose ideas and vote on them using a quadratic voting system akin to CRV, which compels players to lock up their $PLACE for a defined length of time in return for voting power.

DAO Treasury: To build a healthy gaming community, a part of $PLACE from the Ecosystem Fund and the Play-to-Earn program will be pumped into the PlaceDAO treasury. Seasonal Creator Reward Winners, user-created tank designs, the Punter Room limit, and other components of the game’s token economy will be included in DAO voting.

PlaceWar is currently available for trading on Gate.io Gate.io is used in PlaceWar to deposit or withdraw the cryptocurrency you had earned in the game, and it is the most stable and user-friendly crypto exchange you can use in PlaceWar. It is very safe, secure, fast, and reliable. 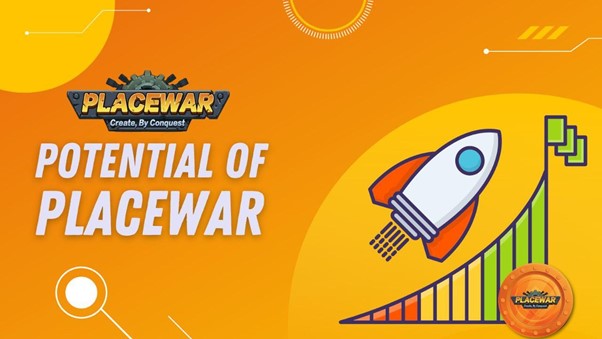 PlaceWar is more than simply another P2E game. They want PlaceWar to become a gamified Internet culture metaverse and an open environment for gamers and design aficionados, not just a crypto space. They want the players to have fun with the games and express their creativity here, with a long-lasting and lucrative enough Play-To-Earn mechanism to back it up. Furthermore, they want PlaceWar to be a game driven by the community, and they feel that this is the key to PlaceWarx’s long-term viability.

If you’re seeking PlaceWar’s future predictions for 2021, 2022, 2023, 2024, 2025, and 2030, and want to know where the prices of PlaceWar will go in the future? We will look into PlaceWar’s (PLACE) previous pricing and see what experts think about its potential price movements.

Please remember that this forecast, like all others, should be viewed with the understanding that it is only the opinion of some market experts/analysts.

Not to add that anticipating anything that precise is impossible. But we shall give it our all. Let’s get started.

PlaceWar’s current price is $0.16, and PLACE is now rated # in the whole crypto ecosystem, according to the most recent statistics. PlaceWar has a circulating supply of 0 and a market capitalization of $0.

PlaceWar’s price has risen 32.82 percent in the previous 24 hours, thanks to increased trading volume and market value.

The PLACE has been on a rising trend over the past seven days, increasing by 71.11 percent. PlaceWar has recently shown much promise, and now may be an excellent time to jump in and invest. Bout. Free regularly

More info about Place War can be found on the following links: