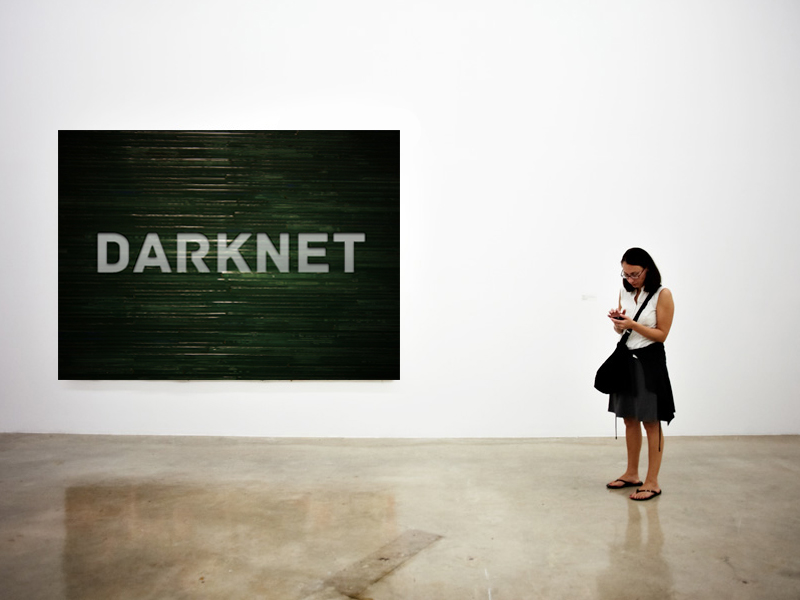 There’s a web crawling bot combing the Dark Net Markets (DNM) buying random goods since 2014. With a weekly budget of USD $100 in Bitcoins loaded into this machine it may sound like something out of a science fiction novel. However, “Random Darknet Shopper” (RDS) is very real. RDS— the laptop that runs constantly was started by an artist collective called Mediengruppe Bitnik and is a “live art project” collecting goods from illicit online markets.

“Once a week the bot goes shopping in the deep web where it randomly chooses and purchases one item and mails it directly to the exhibition space. Once the items arrive they are unpacked and displayed, each new object adding to a landscape of traded goods from the Darknet.”— Mediengruppe Bitnik Art Collective

The bot RDS has just recently purchased a counterfeit Polo shirt from the DNM Alpha Bay says its official owners a group called Mediengruppe Bitnik. The organization who built this crazy contraption have been doing this mystery shopping for some time. The group is a collective of artists who will be displaying the project December 11th, 2015 through February at the Horatio Junior Gallery in London. They have already had a gallery showing in Switzerland with the goods purchased by RDS. So far in 2015 the group has reported to ArsTechnica that the project is still operational, and the bot was initially finding its purchases from the Agora DNM until it dispersed this year.

Back when RDS started, it had purchased fake high-end clothing, Nike sneakers, a forged passport and even has obtained illegal drugs. After this occurrence, Bitnik was questioned by Swiss St. Gallen police for the bot’s purchase of ecstasy but no one was arrested as officers became aware the buy was a presentation of art. Thomas Hansjakob, a spokesperson for the Swiss St. Gallen police, told press “We decided the ecstasy that is in this presentation was safe, and nobody could take it away. Bitnik never intended to sell it or consume it, so we didn’t punish them.”

Alpha Bay is a DNM that has been operating smoothly for some time since the demise of Agora. Back in the summer of 2015 Agora had slowly flipped the switch to off because the owners believed they detected moles within their system. Shortly after the fall of Agora the market was replaced by Alpha Bay founded by the creator alpha02. The site had acquired 14,000 new users in the first 90 days of operation and is currently the largest active DNM. Users with a Tor browser and VPN can access the Bay 24/7, and the market has a 97.15% approval rating on the Deep Dot Web publication. The marketplace enables its users to utilize Two-Factor Authentication and a centralized escrow service for buys. Based out of Russia the market has little restrictions on what can be sold.

Bitnik’s bot is on the search for different collectibles through these random onions and basically anything it can score. They’ve had an array of unique collections and continue to purchase as much as possible no matter what it is. Due to the switch from Agora to the Bay the deep web crawler can now buy drugs again as it couldn’t do so for a few months. The ecstasy they purchased in the past was seized by officials and the lab deemed the narcotic as real. The !Mediengruppe Bitnik website reveals that the project also runs on other DNMs located on the deep web stating, “by randomizing its consumerism, the bot is guaranteed a wide selection of goods from the thousands listed on deep web markets.”

The popularity of DNMs is not going anywhere and seems to be growing with every death and fallen marketplace. Since the inception of the Silk Road, many have followed the deep web site’s legacy of offering anything a consumer’s heart desires. Many of these market users believe that vices are not crimes, or victimless crimes are unwarranted. With every shutdown site, a new host of vendors arises immediately after like cutting a head off the Hydra. Bitnik’s new “live art” platform is proof that black markets continue to stay alive and well under many different names throughout the deep web.

The machine itself raises the question can a robot be tried in a court of law for purchasing an illicit narcotic? Right now the answer seems to be no at least in Switzerland. Random Darknet Shopper is a unique approach to looking into society from another angle. To think that there is a web crawling bot that can purchase faux clothing, high-grade cannabis, counterfeit identification, and more without getting arrested is a new feat for artificial intelligence. As for humans, the incarceration rate for those surfing the web or streets for shadow activities is just a wee bit different compared to robots.

What do you think of this “Live Art Project” that randomly buys off the Darknet? Let us know in the comments below.