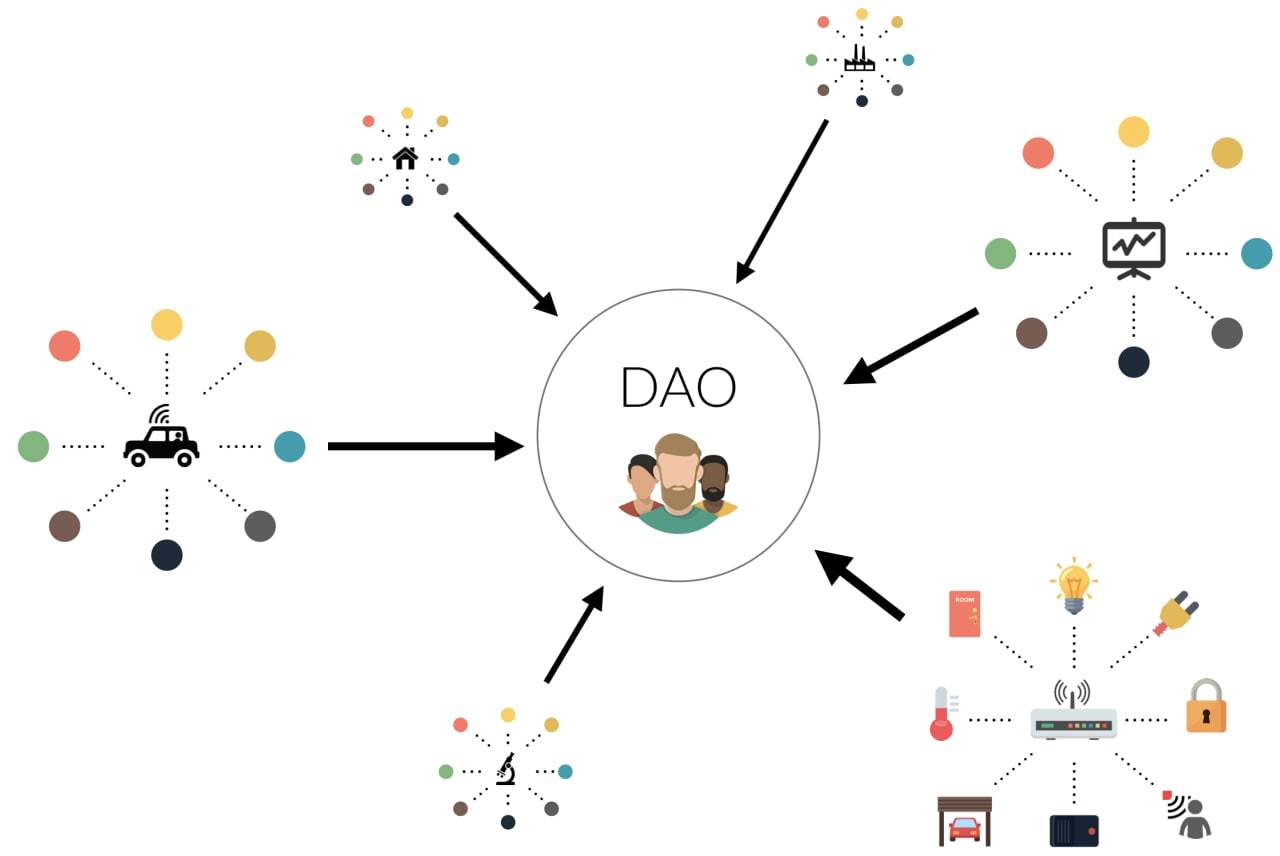 The Future of Work is Decentralized and Decent

The era of independent workers

For decades, holding a “full-time job” with one employer has been the norm in developed economies. Increasingly, those norms are changing. A new generation of young adults entering the global workforce, the aftermath of COVID-19, and numerous other factors have spurred accelerated growth in one specific segment of the economy: independent workers.

More than one-third of U.S. workers (about 56 million total) participate in the gig economy, either as their primary or secondary jobs. Additionally, 4.33 million people in the United Kingdom were self-employed in the first months of 2021.

Beyond those raw stats, we can see the proliferation of freelancing and gig work through the emergence and rapid growth of major gig economy employers, including Uber, Lyft, Turo, Upwork, and Fiverr.

Blockchain now stands poised to take self-employed workers to the next level, with Decentralized Autonomous Organizations (DAOs) leading the way.

The future of corporations could be very different as DAOs take on legacy businesses. It’s the ultimate combination of capitalism and progressivism. Entrepreneurs that enable DAOs can make $. If the community excels at governance, everyone shares in the upside. Trustless can pay

When workers join a DAO they become part of a community, working in a distributed manner, taking on various responsibilities, and receiving rewards for their work in the form of community tokens. The number of active DAOs rocketed 660% from 2019 to 2020, according to research group DeepDAO.

Given the prevailing economic and societal trends, the massive shift from traditional work and full-time employment to freelancing, working part-time, and independent work is likely to continue, even after we’ve put the pandemic to rest. Still, a major challenge remains: how do we move forward with a more independent workforce that also honors workers’ rights?

Independent work offers three defining advantages: a high degree of autonomy; payment by task, assignment, or sales; and fluid relationships between workers and projects. But despite those tremendous perks, there are still numerous issues to address.

In the blockchain world, a second major problem arises consistently. As independent workers attempt to collaborate on development projects, they must do so with people they’ve likely never met, and often don’t know at all. The challenge of such a set is obvious. How can these independent workers, often operating anonymously and on opposite sides of the planet, build trust? How can decentralized collaborations in decentralized environments occur effectively and harmoniously, when no prior foundation of trust has been built?

As a partnership committed to building a better, more just #FutureOfWork, Opolis and Metis aim to provide that foundation of trust while also giving independent workers access to vital benefits, rights, and protections. To do so, Opolis and Metis are using innovative blockchain technology, and novel DAO mechanism designs.

Opolis is a digital employment cooperative, supported by the Ethereum ecosystem, that’s designed to improve working conditions for independent workers. The inspiration behind Opolis was the vision of a more egalitarian global employment framework. Its founder envisioned a system that would bring powerful tools and infrastructure to independent workers so that they could design their work lives in a way that would suit their personal lifestyle preferences.

Using the structure of that cooperative and its $WORK token, Opolis is built as a public utility framework, so that services and technology can be delivered to anyone, anywhere, at a sustainably low cost. That framework will allow freelancers and gig workers everywhere to access the same health benefits, life and disability insurance, and other services that until now only corporate employees have been able to access. By leveling the playing yield for independent workers, Opolis is building an ownership economy for the world of Web 3.0.

Metis will support Opolis Members from the collaboration layer to build trust, manage collaborations, and provide a robust infrastructure to backbone independent work.

Metis sees DAOs as a flowing collective where individuals can join and quit freely to accomplish various goals, meshing perfectly with Opolis’ vision of independent workers’ rights. In order to achieve that synergy, Metis needs to set up an open, fair, transparent, immutable, and secure decentralized system to enable the flow of trust throughout the collaboration process.

In the Metis ecosystem, every individual operates as a standard “module”, but with different characteristics. Each individual user gets an NFT-based passport to record their Reputation Power, collaboration history, and other attributes that help build trust. That Reputation Power is immutable, so all users working on the Metis blockchain can judge for themselves if a person is worth collaborating with. Staking NFT passports and tokens enables the formation of trusted collaborative relationships between different users who didn’t know each other before. The NFT passport gets updated every time a collaboration ends. 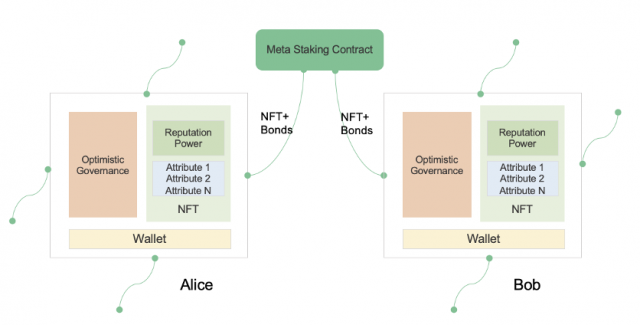 Then, to support value creation activities, we need a robust infrastructure. Layer 1 Ethereum in its current form is not feasible for most business operations, considering its high gas costs and low transaction efficiency. A Layer 2 solution is the solution to these problems. But while other Layer 2 solutions focus primarily on lowering the cost and improving transaction speed, the key to creating optimal decentralized collaborations is to also boost scalability and functionality far beyond the status quo.

That’s where Metis Rollup truly shines. While the Metis Layer 2 solution slashes gas fees and supercharges the throughput process, it also creates a far more scalable user experience than any other L2 offers. More than that, it offers the framework to build nearly unlimited functionality. Users can perform a massive number of different tasks with Metis Rollup, from creating their yield farming to even building their own version of Uniswap. From a future of work standpoint, Metis’ ability to enable users to build their own Decentralized Autonomous Company (DAC) is a huge step forward for independent workers, or really anyone with an entrepreneurial spirit.

Finally, decentralization also means fair opportunity for everyone which means providing a platform that’s so easy to use, even total blockchain novices can perform robust tasks (such as starting their own DAC) in just a few clicks. If everyone from expert developers to total beginners can participate in the development of a decentralized economy, the ecosystem will become infinitely more versatile and healthy. Metis Middleware is designed to serve exactly this purpose.

Building for the Web 3.0 world

Opolis has already gained widespread popularity and support within the Ethereum ecosystem, with the massive success of its ETHDenver community taking its place alongside entities such as Consensys, MakerDAO, BaderDAO, and Gitcoin as Coalition Members.

The next big step for Opolis will be to promote the legislation of DAOs as part of its Colorado Cooperative framework. With blockchain and individual-centric DAOs forming a new kind of work infrastructure, a whole new Web 3.0 world will be built that will mimic the traditional workplace, but this time with independent workers becoming a more vital component of the global workforce.

Together, Opolis and Metis will give the global independent workforce the ability to reap the benefits and advantages currently available to salaried employees. More than that, this partnership will enable projects to scale rapidly and effectively within the trustless decentralized world.

With a target market of hundreds of millions of independent workers around the world, the partnership of Opolis and Metis could have massive global implications. With Opolis expanding to different countries, Metis will deploy its governance expertise to promote DAO legislation all over the world, starting with Asia and the Middle East and spreading to many more regions to come.

Together, we hope to fulfill our shared dream: to create a world in which independent workers can work freely, with a full set of rights and legal protections. The future of work will be defined by both its accessibility, and its decency.

Based on the spirit of Optimistic Rollup, Metis is building an easy-to-use, highly scalable, low-cost, and fully functional Layer 2 framework (Metis Rollup) to fully support the application and business migration from Web 2.0 to Web 3.0. Its scalable protocol supports a wide range of use cases, including yield farming, DEX trading, and powering the gig economy via dApps that offer cheap and fast micropayments.

Metis integrates the Decentralized Autonomous Company (DAC) framework within its Layer 2 infrastructure, a differentiating factor that makes it easy for any developers, builders, or community leaders to build their applications and communities. It also makes it easy to use pre-set tools to facilitate their development, manage collaboration, and enjoy the network effects of the world’s largest decentralized finance ecosystem, without the costs and bottlenecks normally associated with Ethereum. Metis’ goal is to make building dApps and DACs on its platform so easy to do, even total blockchain novices can make it happen in a matter of minutes.