Why Ethereum May Severely Underperform DeFi Tokens During Next Bull Market

Ethereum has been able to hold on to the gains that it incurred yesterday, with its buyers currently attempting to stabilize its price within the $240 region.

It has shown some signs of weakness throughout the past several hours, as it has been struggling to surmount the slight resistance it faces within the mid-$240 region.

Until Bitcoin pushes higher and breaks through the mid-$9,000 resistance it faces, it is likely that ETH will consolidate around its current price levels.

One analyst is now noting that Ethereum may severely underperform one specific set of tokens during the course of the next bull run.

He explains that DeFi tokens may continue stealing ETH’s thunder, making it a less attractive investment to neophyte investors who flood into the market.

At the time of writing, Ethereum is trading down just under 1% at its current price of $243. The crypto is currently consolidating after pushing higher yesterday.

While ETH remains caught within its macro trading range, many ETH-based DeFi tokens have been posting intense gains.

One fund manager is now noting that the trend of these tokens outperforming Ethereum isn’t likely to end anytime soon, as investors will favor assets that have recently seen hyper-growth and those with lower valuations.

“While ETH will go up significantly, it will underperform the top DeFi tokens in this bull cycle just as BTC underperformed ETH during the last cycle. The assets with hyper growth and a lower starting valuation always wins in a bull market.”

The hype surrounding the tokens relating to the decentralized finance sector continues growing.

According to data from analytics platform Santiment, social activity surrounding these tokens is on a similar trajectory to that seen by Ethereum in the summer of 2017.

This could mean that parabolic growth is imminent.

“Mentions of DeFi over the past couple of months has followed a similar trajectory to mentions of ‘#Flippening’ when ETH was gaining its most hype back in the summer of 2017. Obviously two very different subjects, but this does function as a historical reminder of some similarities in their growth patterns.” 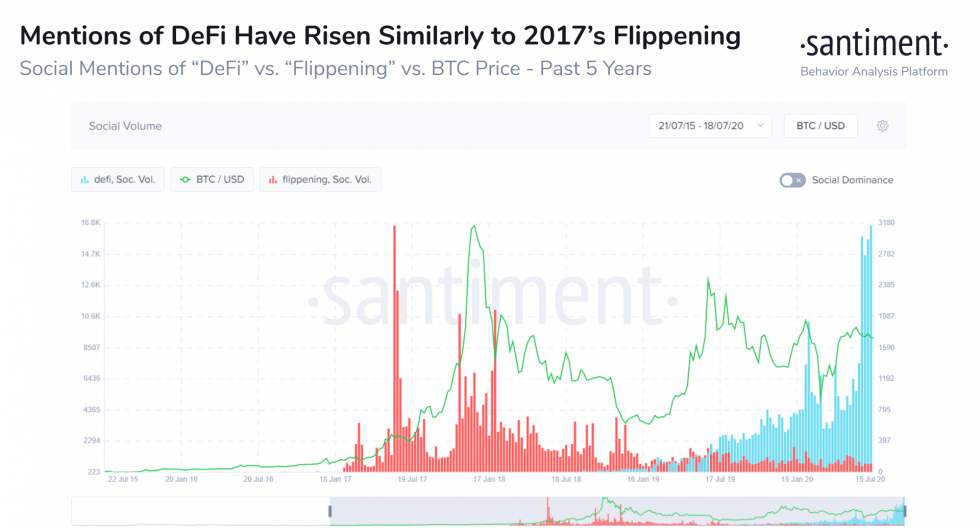 If the entire market enters a fresh downturn, however, this will likely place heightened pressure on smaller tokens, leading them to underperform Ethereum.