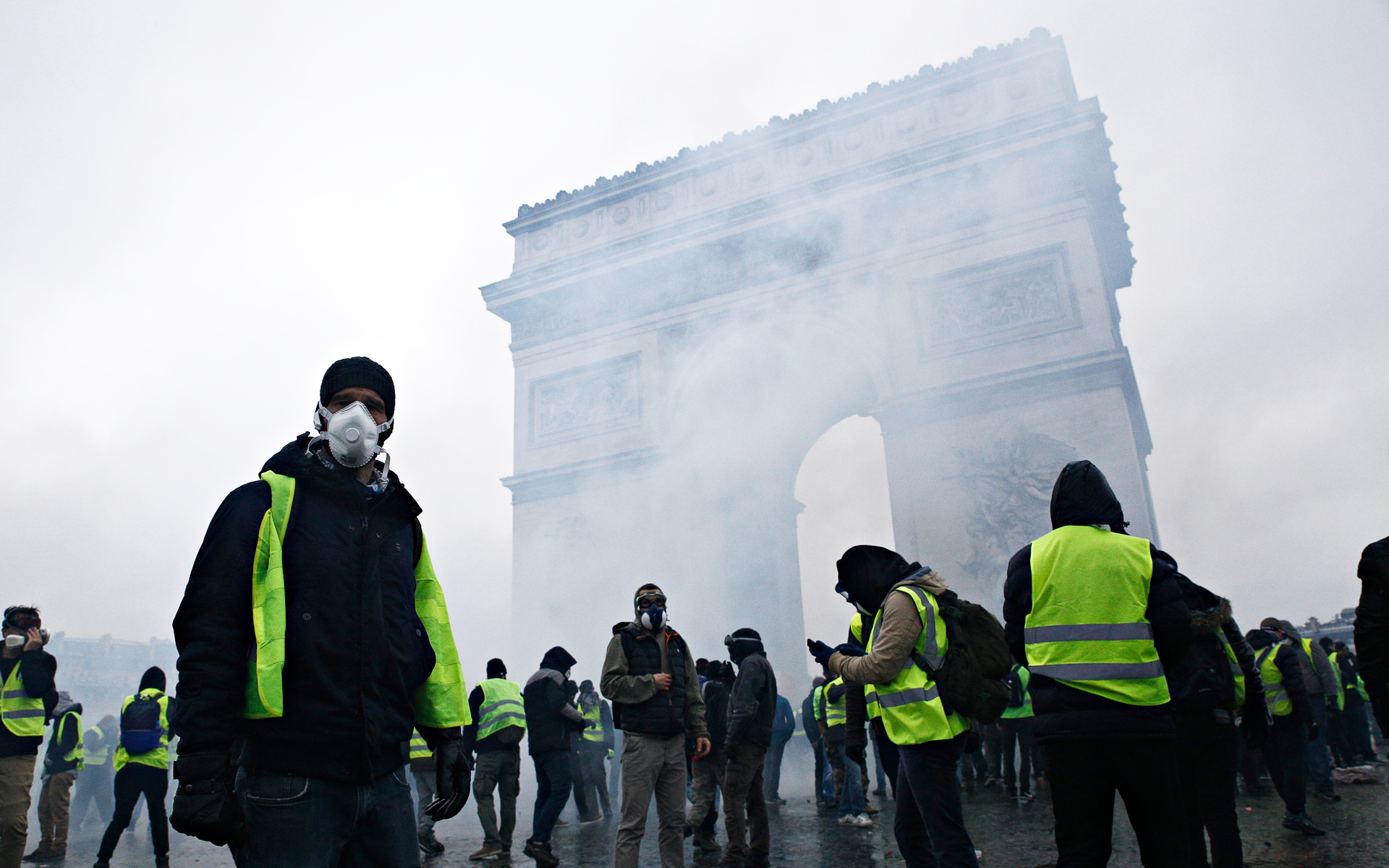 If ever anyone wished they could turn back the clock it would be wildly unpopular and “elitist” French President Macron. His decision to raise fuel tariffs in November has mushroomed and his country has succumbed to a wave of protests and violence the likes not seen since the 1960s. The yellow vests are everywhere and beyond causing chaos on the streets, it seems they’re now turning against the banks.

What’s Going On in France?

So far in Paris, demonstrators have fist-fought with riot police, cars have been set alight, and monuments damaged. While the number of protestors has fallen slightly, their proliferation has not.

According to this Facebook page, Yellow Vest protesters are now planning another demonstration outside the Rothschild Bank of Lyon on January 9.

Reports are also starting to abound that the infamous protestors are now planning a “bank run.” They are calling on all French citizens to withdraw their euros from the banks.

French banks hold an estimated one-quarter or less of all the funds that would be required should French citizens take such an action. A bank run like this has the potential to paralyze the country and even collapse the euro.

How Did the Yellow Vests Start?

It started back in November after an unpopular decision by the French government to raise fuel prices. This is something that historically doesn’t go down well with the French.

Thousands of protestors took to the streets, many donning yellow vests (gilets jaunes). They set out to demonstrate their discontent by smashing windows, buildings, monuments, and disrupting traffic.

While President Macron did make some economic concessions in December to try to appease protestors, the measures failed to placate an increasingly angry mob. They’ve come to realize that it’s not simply fuel prices that are upsetting them, forming one of the largest anti-government movements since 1968.

Their grievances go way beyond a hike in fuel prices to inflation rates in general, untapped money printing eroding their wealth, and the elitist policies of Macron.

These protests have been some of the most violent in recent times with fires even starting on the prestigious Boulevard Saint Germain in Paris last Saturday.

Images of French boxer punching down a riot policeman have also been rife on social media. And the spokesman for the ministry of the government was even rammed with a forklift.

You really don’t want to piss off the French.

The government’s reaction has been swift and severe. It will do little to warm the people further to the right-wing regime they feel they are up against.

French Prime Minister Edouard Philippe announced plans to punish people who hold unsanctioned protests. He said that the government will create new legislation to ban protestors from wearing masks at rallies and support:

Known troublemakers will also be prevented from attending the events, just as football hooligans are denied entry to a stadium. The problem with this, however, is that unlike a planned event at a football stadium, the French authorities can’t stop people who aren’t buying tickets or events organized on social media.

And this hasn’t served to stop the riots.

In fact, the movement has gathered momentum, with some seven weeks of protests held every weekend of some kind in different cities across France. As many as 80,000 security forces will be deployed on the streets for the next expected wave of protests that are not limited to Paris.

Other key cities, such as Lyon, Rouen, and Caen, are seeing protests on the weekends causing further disruption. More than 1,400 people have been injured with six people dead so far.

What Does this Have to do with Bitcoin?

Bitcoin fanatics have rallied behind the yellow vests after some of them were seen with signs on their backs saying “Buy Bitcoin.”

The truth is that of the thousands of yellow vests, probably only a handful of them support, understand, or are even aware of Bitcoin. However, this handful is a potentially powerful and growing army.

The French protestors may not be armed with guns and guillotines. But they have a more powerful weapon at hand: knowledge.

Yesterday, Bitcoinist reported that street art in Paris depicting yellow vests in protest and a woman raising the French flag high had a hidden bitcoin prize inside it.

Spreading the word about bitcoin through art, protests, and private meetings are working. It’s attracting the eyes of millions of people in France and around the world.

Protest Outside the Rothschild Bank of Lyon

The yellow vests have so far organized their protests largely on social media. According to the Facebook event mentioned above, some 300 have confirmed and more than 3,000 are interested in attending the protest at the Rothschild Bank of Lyon tomorrow.

The significance of this runs way back to the country’s 40-year-old grievance with France’s private banking system. The French government borrows from them and is forced to repay with high-interest, plunging the country into further debt.

A Possible Run on Banks

The word is spreading throughout social media about a possible run on banks. French boxer Nicolle Maxime has taken to YouTube incentivizing supporters to withdraw their funds from the banks.

Other news sites such as the Daily Crusader are also talking about the significance of this move. This could paralyze the country, collapse the banking system in France, and even cause a collapse in the euro. The ambitious publication notes:

It may be too soon to celebrate an upswing in bitcoin price [coin_price] just yet. After all, just because the French withdraw their euros does not mean that they will invest them in bitcoin.

However, with the word spreading and the French being somewhat an incubator for innovative bitcoin startups, selling bitcoins from tobacco shops and the increasing yellow vest movement–perhaps what’s bad for the euro could be good for bitcoin.

If every French person converted 20% of their bank deposits into #Bitcoin (and got a Bitcoin debit card to use for day-2-day stuff), French banks and the government would collapse and a lot of bloodshed could be avoided. #jilletsjaunes #JeSuisSatoshi pic.twitter.com/stKqKHYHWl

If every French person converted 20% of their bank deposits into Bitcoin… French banks and the government would collapse and a lot of bloodshed could be avoided.

It will be interesting to see what–if anything–emerges from this for Bitcoin. Can the Yellow Vests spread awareness for a currency not controlled by central authorities and governments? Let’s hope so, and also for an imminent end to the violence.

Will the yellow vest protest pose a threat to the Euro? Share your thoughts below!