Zebpay, India’s biggest Bitcoin company, is proud to announce that after only 10 months of operation, it has achieved over 1 billion INR (approximately $15 million USD) in turnover through its Bitcoin app available on both iPhones and Android.  They currently have over 30,000 users, with 6,000 being added every month. As the fastest growing Bitcoin Company in India, Zebpay plans to add 100,000 users by the end of 2016. With the infusion of $1 million from the series A funding round in January, and Bitcoin transaction count having increased by 81% in 2015, it’s certainly a doable task. 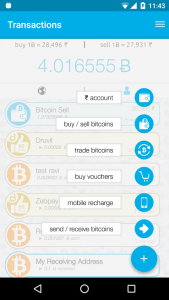 Zebpay has many types of users ranging from freelancers accepting payment from overseas customers to users interested in using Bitcoin for profit or as a hedge. Bitcoin has a viable purpose for everyone and Zebpay bridges the gap for all people no matter their need.

“Our users include HNIs, tech savvy individuals, freelancers and a few corporates. They buy bitcoins as an investment with the belief that the bitcoin price will rise.”

Their success lies largely in the prime marketplace India is for Bitcoin, with over 40% of the 1.2 billion person population un-banked. Thanks to Bitcoin, Zebpay can connect to otherwise unreachable customers by forgoing the need for a physical bank structure to be constructed.  People are able to then control their own finances without the need for a bank.  Zebpay’s secure phone app allows people to securely be their own banks.  More people have cell phones than bank accounts in India.

“Bitcoin wallets could be used in remote areas without the need for brick and mortar banks. India is perfect as a society to be at the forefront of developing a vibrant cryptocurrency economy.” – Chitral Patel, Growth Officer at Zebpay

Zebpay a Bridge to Amazon For Millions

Used as a versatile Bitcoin app in India, Zebpays app has many practical uses besides exchanging Bitcoin to and from fiat, one of the many India exclusive features. Users of the app in India can also enjoy recharging their mobile airtime with Bitcoin, as well as save 10% on vouchers from companies like Amazon and Flipkart.  The vouchers allow people who would not normally be able to buy products from Amazon and Flipkart due to not having bank accounts with debit or credit cards. By opening up these services people are able to participate in the growing world economy instead of being left out by mainstream financial institutions. 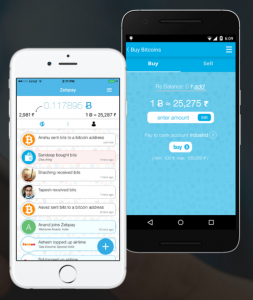 A user is also able to transfer Bitcoin to other people with minimal effort.  Simple and secure right from the Zebpay app.

Zebpay in March as well released the ability for users to choose their bid and ask prices, a move seen as providing users more flexibility with how they handle their Bitcoin. The new abilities are a move to compete with other Indian Bitcoin services, such as Coinsecure, an Indian Bitcoin exchange and wallet provider, which recently received $1.2 million in Series A funding.

Zebpay was founded in 2012 by Mahin Gupta, with a focus on integrating Bitcoin and blockchain technology in India. Joined by Saurabh Agrawal and Sandeep Goenka in 2014, their goal is to bring financial freedom to the billions of un-banked.  Zebpay’s Story: We have been involved in bitcoins since its early days in 2011. We started India’s first bitcoin exchange in 2012. We realize that for a new user, there is a learning curve to buy, store and use bitcoins. We are working hard to make this revolutionary technology simple so that Indians can be proud owners and users of bitcoins.

Do you use Zebpay? What do you think has led to Zebpays massive success? Let us know in the comments below!