New data coming from eMarketer’s latest worldwide retail forecast shows that this year, China will manage to surpass the US and become the world’s largest retail market, with sales of over $4.886 trillion, compared to the average sum of $4.823 trillion in the US.

Due to Asia’s growing number of online shoppers, reports indicate that this year alone, the entire continent will spend a record $1 trillion, most of the sum coming from China. While the increasing popularity of ecommerce in other regions such as Southeast Asia and India have helped pushed the number upwards, China owns the largest percentage of the sum in question.

Not only this, but eMarketer pointed out that China will remain the world’s largest ecommerce market, with sales of over $900 billion this year, thus representing about half of the world’s digital retail sales online. 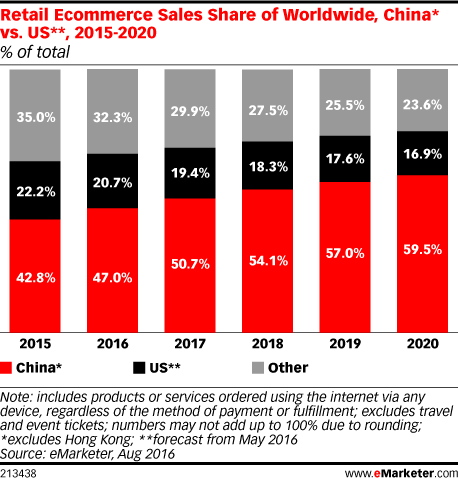 In a recent press statement, the forecasting director of eMarketer, Monica Peart mentioned that:

“Alibaba, Tmall and JD.com positioned themselves well to capitalize on growing consumer demand by creating their own payment systems (e.g., Alibaba’s Alipay) and logistical services (e.g., JD.com operates a self-owned logistics network) … In addition, with rising incomes and increased internet access in rural areas the cultural appetite to shop digitally will continue and we can expect to see further growth in mobile spend.”

Economic analysts believe that the value of the sales expected is likely to double by 2020, reaching roughly $2.725 trillion. EMarketer’s forecast also believes that the Asian region will see an incredibly quick ascension in terms of sales, as they’ll reportedly climb with over 31.5 percent this year alone.

These massive increases will help countries such as China, Indonesia and India grow, while also attracting more investors, alongside with fintech fans, interested in this developing trend. This is likely to happen considering the fact that mobile now accounts for over half of the ecommerce sales in China. New and improved payment systems — such as Bitcoin — may help this trend grow even more.

What are your thoughts on China eclipsing the US in retail sales? How about the development of ecommerce sales? Leave them in the comment section below!