Ethereum and the aggregated altcoin market have been caught within a bout of sideways trading over the past few weeks, with smaller digital assets failing to match the momentum seen by Bitcoin.

This underperformance isn’t entirely unexpected, as it highlights a relatively common trend seen during early-stage bull runs where Bitcoin captures that majority of the capital inflows before traders rotate into higher-risk assets like altcoins.

Because Bitcoin has proven that its rally is sustainable, investors may soon begin directing more capital towards Ethereum and other cryptocurrencies that have been underperforming.

At the time of writing, Ethereum is trading down marginally at its current price of $382. This is around the price at which it has been trading throughout the past few days.

Meanwhile, Bitcoin is attempting to retest its crucial $13,800 resistance level that has been suppressing its uptrend over the past week.

If this level is firmly broken, then the crypto could be on the cusp of seeing a leg higher that leads it up towards its previous all-time highs.

Trader: ETH Likely to Rally Towards $445 in Coming Weeks

One trader believes that Ethereum’s trend of severely underperforming Bitcoin is about to come to an end due to mounting buy-side pressure.

He is targeting a move towards $445 before it faces some intense resistance that slows its ascent.

“ETH: Not looking bad. Swept last weeks low into blue weekly demand. As long as we hold above blue, expecting upside towards unswept highs into $445 area. Let’s see what we get,” he said, pointing to the levels marked on the below chart. 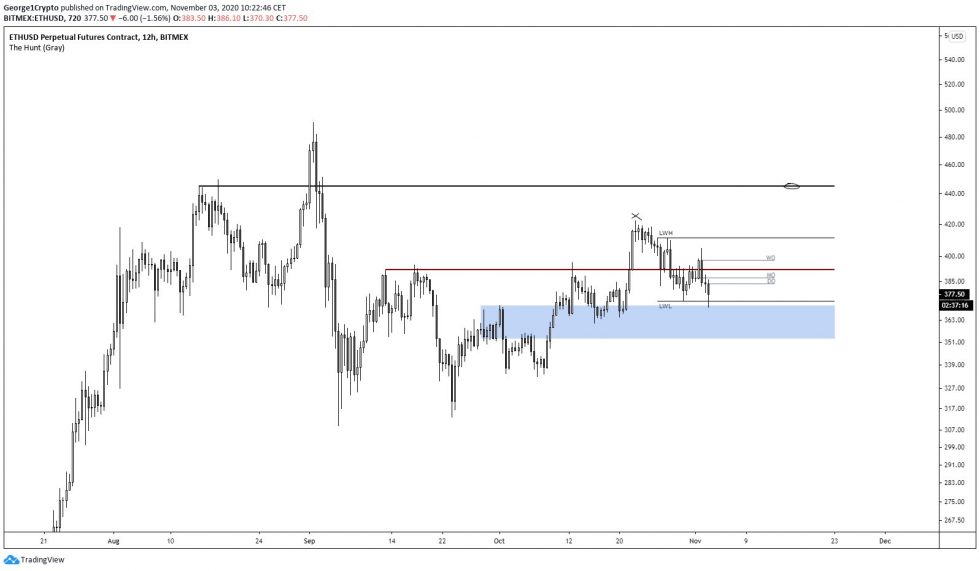 So long as Bitcoin remains stable following the election and pushes higher, there’s a strong chance that Ethereum and other altcoins will soon see further upside.