It is no secret that, in this day and age with so many alternative payment methods rearing their heads, traditional financial institutions will have to step up their game. However, some of these institutions – banks, to be more precise – are choosing to stick with their old methods of advertising their services. And sometimes, that happens in an aggressive tone, daring customers to go somewhere else if they see fit.

Also read: Are Wall Street and the Banks Trying To Circumvent the Bitcoin Blockchain? 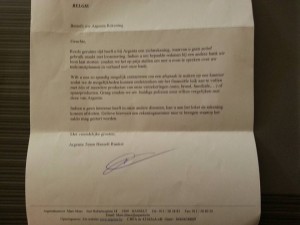 When it comes to using a bank, there are certain services they can offer you. On the one hand, there are the traditional savings and checking accounts, which are the most common service. But most banks also offer insurances, bank loans, mortgages, and a few other things you may or may not ever need. It only makes sense, on paper at least, to combine all of these services under the same bank.

That being said, things are changing in the banking landscape. Rather than trying to advertise their products because of the amazing service and protection provided, you will see a different message these days. And sometimes, that messages becomes outright aggressive and hostile towards the bank’s customers, obligating them to adhere to the bank’s terms or else they will face termination of their account.

In Belgium, there is a certain bank called Argenta. Unlike most banks, Argenta is a privately-owned bank and not affiliated with the Belgian government like a BNP Paribas or ING would be. The reason the name Argenta is of particular interest to us is because they are forcing existing clients to have their monthly wage deposited into their bank account. On top of that, it would be “wise” also to obtain insurances from Argenta as well. Failure to comply will result in the termination of all your Argenta bank accounts within 30 days.

A resident of Hasselt received the letter in the mail a few days ago, which explains how this person has an Argenta bank account but his monthly wage is not deposited to that account. Nor is this person a customer for any of Argenta’s other services at this point. As a result, the local Argenta office has sent this person an official letter asking him about his “future plans between himself and the bank”.

The most aggressive part of this letter is found at the bottom, which clearly states:

“If you are not interested in any of our additional services, you can stop by our office where a bank clerk will help you terminate your Argenta bank account. Please make sure to bring a bank account number with you, so we can transfer over any remaining funds to your other account.”

It goes without saying that the [smaller] banks are feeling something is amiss, and they are struggling to keep their services relevant at this point. Such behavior only widens the door for alternative payment methods – such as Bitcoin – to take on the existing financial ecosystem head-on.

Note from the Author: It is important to note this is a letter from a local, independent Argenta office, and does not necessarily constitute as a directive of the Argenta group.  Every individual Argenta office is run by an independent manager, and they are free to determine the customer relationship for their individual office.

What are your thoughts on this aggressive behavior by Argenta? Let us know in the comments below!