Binance, the cryptocurrency exchange behemoth has invested in Malta-based chiliZ, a blockchain esports company. ChiliZ revealed the news via a blog post on May 5. This move represents Binance’s first significant investment in Malta since announcing its intention to transfer its operations to the Mediterranean Island country.

Binance Teams up with chiliZ

The monetary value of Binance’s investment in chiliZ is unknown, but the eSports company has already raised more than $27 million in a private funding round. Commenting on the investment deal, chiliZ CEO, Alexandre Dreyfus said:

Binance’s significant investment in chiliZ will boost our current private placement offering and help us to move faster. Their support will help us deliver our vision globally, increase our visibility in the blockchain ecosystem and empower our technical vision.

Apart from the monetary investment, Binance also plans to partner with chiliZ to tokenize the eSports ecosystem. Trading of virtual assets is already a mainstay of the video gaming world. By leveraging cryptocurrency and blockchain technology, stakeholders can monetize the industry. Commenting on the benefits of such a partnership, Binance CEO, Changpeng Zhao said:

chiliZ is a creative way to embrace blockchain technology, aimed at building tools and services for mainstream adoption in industries that have a massive global growth rate. We are thrilled to support the team behind the project, and to help make them a success.

Binance Coin (BNB) remains the best performing token of 2018. BNB prices are up almost 100 percent since the start of the year. At press time, BNB tokens were trading at $16.33 which represents a nine percent gain over the last 24-hour period. The weekly and monthly gains posted by BNB so far stand at 32 percent and 17 percent respectively. The 17th ranked cryptocurrency according to market capitalization figures reached its highest price valuation of $24 in mid-January 2018. 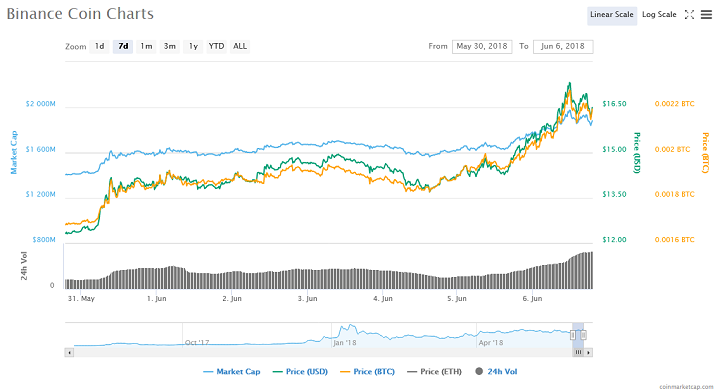 In a related development, the Maltese government has drafted a set of laws to guide the operations of cryptocurrency companies in the country. Announcing the news, Silvio Schembri, the Digital Economy Parliamentary Secretary said Malta was setting a precedent for the rest of the world to follow.

According to Schembri, the provisions in the draft provide the necessary framework for the monitoring and regulation of the country’s burgeoning cryptocurrency industry. He dismissed claims of the government tacitly trying to encourage money laundering under the guise of cryptocurrency commerce. Schembri said the requirements in Malta’s cryptocurrency laws were even stricter than the EU’s anti-money laundering regulations.

The law isn’t without its critics as opposition MP Kristy Debono found fault with the composition of the Malta Digital Innovation Agency (MDIA) board. The MDIA is the body responsible for overseeing the country’s emerging cryptocurrency industry. According to Debono, the MDIA should have cryptocurrency operators as members rather than nominees exclusively handpicked by the Prime Minister. Debono believes that without adequate representation from the cryptocurrency community in the running of the MDIA, the Maltese cryptocurrency economy will suffer the same disrepute as other sectors.

What are your thoughts about Binance teaming up with chiliZ? Will the new government regulations in Malta attract more cryptocurrency and blockchain investment into the country? Keep the conversation going in the comment section below.