Bitcoin Comes Down From Weekly High

Data from cryptocurrency exchange Bitstamp, which tends to act as a lower benchmark for Bitcoin markets, put the cryptocurrency trading around $5600 at press time.

BTC/USD [coin_price] is currently trading near the bottom of its 3-day range, while longer-term performance remains strong. Over the past month, Bitcoin price remains up almost 12 percent. 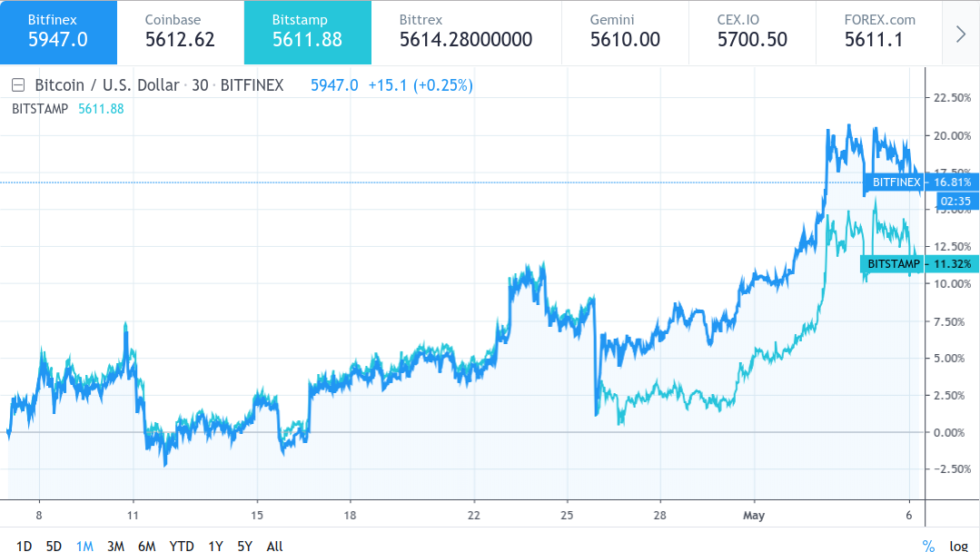 The break in Bitcoin’s winning streak came on the back of panic inside traditional markets as US president Donald Trump unexpectedly announced new trade tariffs on Chinese goods over the weekend.

In a move which could heighten the likelihood of a trade war between the countries intensifying, Trump said he planned to raise 10 percent tariffs on $200 billion of Chinese imports to 25 percent.

The result was Asian stocks tumbling and Chinese diplomats suggesting they would pull out of trade talks this week.

For Bitcoin, the unsure behavior contrasts with the start of its 2019 recovery April 1, which notably coincided with political instability from factors such as the cut-off date for Brexit.

Despite a slight Bitcoin price regression, the cryptocurrency remains technically robust, with milestones continuing such as a 16-month high in daily confirmed transactions.

Sentiment among crypto traders had remained firm even as the industry dealt with difficulties of its own last week in the form of legal problems involving exchange Bitfinex and its sister company, stablecoin Tether (USDT).

For veteran trader Tone Vays, who himself remains conservative about whether Bitcoin has definitively broken out of its bear market, real resistance between $6000 and $6200 further remains a major hurdle.

“I was pretty sure we were going to go up to $600 before the Bitfinex news broke,” he told viewers on the latest episode of his Trading Bitcoin series May 3.

He added he thought $6000 would nonetheless come before any U-turn towards $4000, part of a more widespread belief that BTC/USD would not fall below $3000 again.

In altcoin markets meanwhile, tokens typically lost around 4 – 5 percent in the 24 hours to press time.

What do you think about the Bitcoin price in light of the US-China trade dispute? Let us know in the comments below!