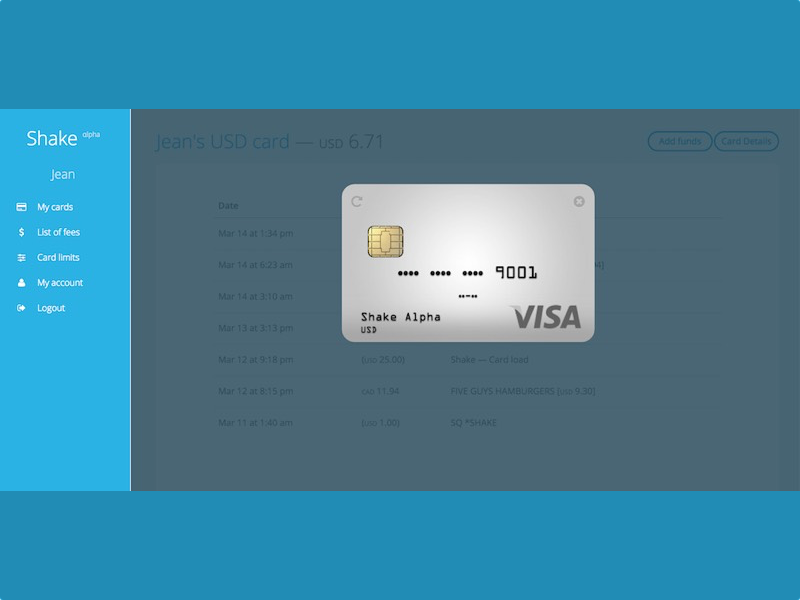 Create Your Own Tap-and-Pay Bitcoin VISA Cards With Shake

Shake, the service that creates VISA debit cards you can load with bitcoin, is opening beta testing to the public. A bunch of new features is also on the way to complement the service.

Tap-and-Pay, Plastic Cards, All With Bitcoin

The Canadian company currently offers apps for Android and iOS. Users with NFC-enabled phones can also use them to make tap-and-pay payments at store terminals. Those without can still use the apps to create “virtual cards”. Still others can use the Shake website to create cards without any mobile device at all.

Shake is also shipping physical plastic cards. Though it can ship plastic to over 130 countries, some will be surprised to see the U.S. is not on the list. The company says, however, that users can still access the service by signing up for unverified accounts.

Speaking to Bitcoinist, co-founder Jean Amiouny said his company experienced some hassles working with Bitcoin and traditional banking/payment systems. However, Shake is currently working with an issuing bank that’s partnered with VISA.

“Not many traditional banks want to hear, or come near, the word Bitcoin. Blockchain, however, is another story.”

Fiat and Digital Currencies, Fees, and Other Services 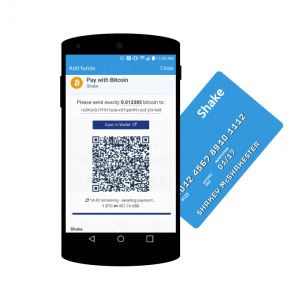 Under the beta, users can currently issue two virtual cards — one demoninated in USD and one in euro. Amiouny added that “if your card is being bombarded with spam or fraud transactions, you can replace the card and have a new number issued for you”.

There’s something you can’t do with a regular VISA card: simply create a new number if the old one is compromised — for example, if a retailer (like Target) with your number on file suffers a security breach.

Creating a virtual card is fee-free, for the moment. Issuing a plastic card is $15/€15, loading a card has a 1% transaction fee and there’s a $1/€1 monthly charge. There are also fees for foreign currency exchange and ATM withdrawals, though they’re competitive with regular credit cards.

For starters, Bitcoin is the only funding currency, though Shake is reportedly working to include others. It’s not saying which ones, just yet.

Shake is also launching a concierge service called “Shake Blue”, for users making less time-sensitive purchases with bitcoin, where VISA purchases aren’t possible. Amiouny said the service is for customers looking to buy items available only in certain parts of the world, and Shake works one-on-one with them to facilitate the transaction.

The two co-founders have a history in financial technology. Amiouny also co-founded a payment processor in the Middle East, and was named among the Canada Next 36 young entrepreneurs of 2013.

His co-founder Roy Breidi was previously a software engineer at Morgan Stanley, working on indestructible tech for traders around the world.

Are you interested in trying Shake? Do you think bridges between Bitcoin and the traditional payments world will help drive adoption? Let us know.