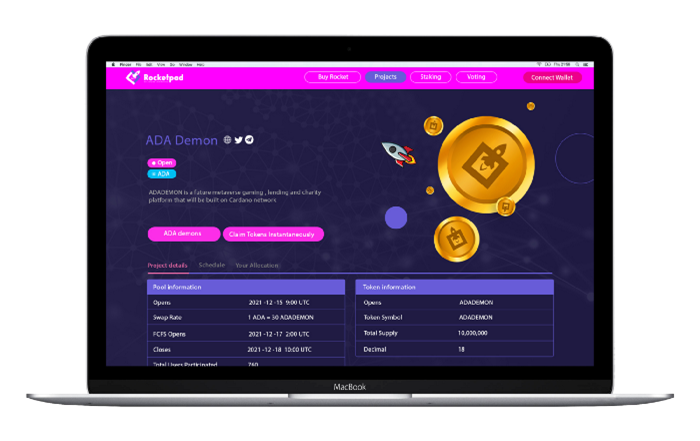 Cardano Based Rocketpad Releases The First Glance of its IDO Launchpad As the Seed Sale Is About To Reach Its Soft Cap. (Progress Release 1.0)

by Bitcoinist
in Press releases
24

Cardano’s price analysis for the day shows a significant bearish outlook, as the price has fallen to a critical support level of $ 1.30 in the last 24 hours. Going down more than 4 percent. It is the right time to buy $Rocket at the seed market. $Rocket Token Seed Sale is Live,To Participate click the link below https://www.rocketpad.community/seed-sale-page

Cardano (ADA) has become the third largest cryptocurrency in the world and investors are expecting a positive return in the near future.

We at Rocketpad is Building Ecosystem on Cardano Network. The Rocketpad team is going to collaborate with Alumni Plutus Pioneer, a developer incubation program focused on Cardano. The next release will bring Rocketpad closer to the mainnet launch.

It is with utmost joy that we commend the pace of the progress of our project. Rocketpad is stabilising and dominating the crypto world. The remarks by major influencers alone has said everything needful to say.The team of front — end developers has also started doing rigorous researching on wallet connection APIs and a way to deploy our static site using an API gateway this will help to protect us from Distributed denial of service attack protection (DDOS).

In a nutshell, we would love to bring to us the new developments in our project. Rocketpad without mince of words is about to deliver it’s IDO launchpad, currently it has released an exclusive front demo with Polished UI/ UX template/design which is both user friendly i.e. it would be easily accessed both through desktop and smartphones.

Rocketpad is bent on creating a fair and completely decentralized IDO launchpad platform which benefits the token holders.The users will be whitelisted based on the amount of $Rocket held in their wallet. This Launchpad offers some other unique features that would interest you to know about. It also allows investors to stake their $Rocket to make some profits.Therefore $Rocket maybe staked in Staking contract to get more tokens as reward.

$Rocket tokens maybe exchanged for other tokens on the blockchain, allowing players to supply liquidity and form a market. Swappers would be charged modestly for purchasing $Rocket, and liquidity providers would be paid a return on their deposit in exchange for this. It is also introducing a feature that is quite strange in the cardano ecosystem, the concept of token burning. This is a practice of eliminating the existing tokens from circulation so as to increase the price and value of $Rocket.

The most outstanding feature is about the three tiers level System…this actually makes the project primus inta pares(first among equals).ROCKETPAD is ready to play an important role in bootstrapping ecosystems , filtering out low quality projects , offering more equitable token distribution and helping developers get their ideas off the ground while powered by our utility token called $Rocket . How does Rocketpad tend to achieve this? By using the Mechanism of Tier-Based system.

Exclusive NFT reward is also another features that makes the project scintillating. Because of the significance and vitality NFT has offered to the people. Rocketpad tends to follow the trend to create an NFT which$Rocket holders can receive as an exclusive reward. Subsequently, we would be deciding if to run NFT reward campaigns occasionally or consistently though consensually, Occassionally is more likely to be the best as that would make it interesting.

Snowfallprotocol.io (SNW) – Tokenomics and Roadmap of the Protocol

Regulation and Crypto: Where Will the Next Wave of the Digital Era Take Place?

Tron (TRX) And BNB Probably Heading For Another Dip; The Hideaways(HDWY) Gears Up For More Gains