Imagine a week going by where the worlds of sports and crypto weren’t colliding. Leading the crossover headlines this week? The NFL is putting a hold on crypto and NFT engagement for athletes.

However, while the league wants players to hold off, there are plenty of other athletes across various sports that are having some fun with NFTs this week. Last week was Steph Curry, but this week we’ve got a whole lot more.

Let’s take our weekly dive into the past seven days of the intersection between crypto and sports.

NFL Tells Teams They Must Hold Off On Crypto Deals

NFL players are certainly no stranger to crypto. It arguably all started with Russell Okung years ago – and now many top-tier players, like Tom Brady, Odell Beckham Jr.,  and Saquon Barkley, among others – have signed individual deals with crypto firms.

The NFL has a bit of a reputation for wanting to run a tight ship. Just last month, we covered in a Sports Slice publishing how the league was exploring a new blockchain specialist role. Now, as first reported by The Athletic this week, the league is telling it’s teams that they may not sell team-specific NFTs and sponsorships to crypto-first trading firms and exchanges.

While the NFL puts teams on hold, the NBA hasn’t taken any strong stance of team-specific NFTs, and a number of basketball teams across the league have been engaging in crypto. The Utah Jazz announced this week an engaging NFT release that will turn things up a notch from the team NFTs released to date.

The team is offering a ‘tiered’ NFT experience for Jazz fans. Tier 1 NFT buyers will be mailed an Oculus to tour a virtual Jazz locker room, led by Jazz owner Ryan Smith – who will also be present for a 30 minute Q&A. Tier 2 is similar but will not include the Oculus headset.

The Jazz press release also shared that this will not be a one-time engagement, and that special featured NFT drops are likely to occur again throughout the upcoming season. It’s a new world of fan engagement.

Emerging NFT sports platform Candy Digital released their first collegiate NFTs this week, titled “Sweet Futures.” While individual collegiate athletes have released NFT projects, the Candy Digital drop is the first serialized collegiate release in the NFT space. A number of NFTs in the series have already sold out at the time of this article.

Simone Biles Is On Deck

In last week’s Sports Slice, we covered Naomi Osaka’s NFT drop on Autograph. Now, another one of the best athletes in sports today is on the block. Olympic athlete Simone Biles released a two-part NFT drop this week on Autograph. Biles is arguably the most marketable athlete in sports, as we covered in a recent Bitcoinist report.

Algorand has been finding some unique sports partners to engage with lately. Last month, the platform sponsored the 2022 World Chess Grand Prix Series as the official blockchain partner. This week, Algorand joins the ranks of Rolex, LEGO Technic and more as official series partners of the 24 Hours of Le Mans Virtual.

Last year’s 24-hour virtual sim race was the first of it’s kind, built on the backbone of the historic annual 24-hour Le Mans race. The five-race series winner will bring home a $250K prize pool. Could we see Algorand-powered race results or tracking, or perhaps some Le Mans NFTs? The extent of the partnership is yet to be disclosed. 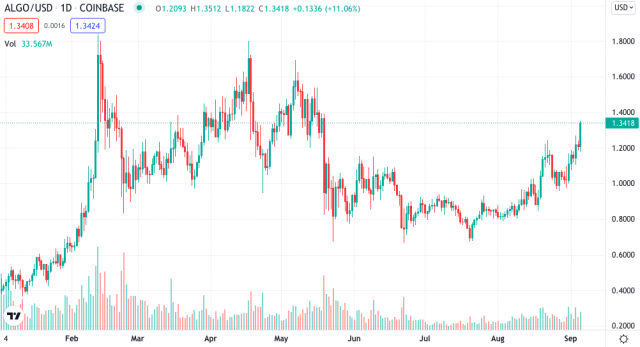 The New Fleet of Sports Athletes Getting Into NFTs

Last week, it was Steph Curry. What about this week? Well, newest Los Angeles Laker Malik Monk is in the game, and former NBA Finals MVP Andre Iguodala bought his first NFT this week as well.

The list of top tier sports athletes joining the ranks of NFT collectors is growing by the week.

Zytara Labs shelled out a hefty deal in recent months to partner with Italian football club AS Roma, with support from DigitalBits. This week, a similar deal came to life with powerhouse club Inter Milan. The reigning 2020-2021 season football champions signed a $100M partnership deal with Zytara Labs, again with the support from the DigitalBits Foundation.

The deal will secure DigitalBits as a sleeve sponsor, and leverage the DigitalBits blockchain as a method of payment both online and on-site at Inter Milan games. Zytara will work closely with the team to develop Inter’s mobile app.

Who is the GOAT of the WNBA? If you’ve been asking, you’re not alone. As aptly noted by sports outlet Boardroom, Google searches of that exact question tripled between August 24-31. Yes, that was right around the same window that Top Shot released their first WNBA moments.