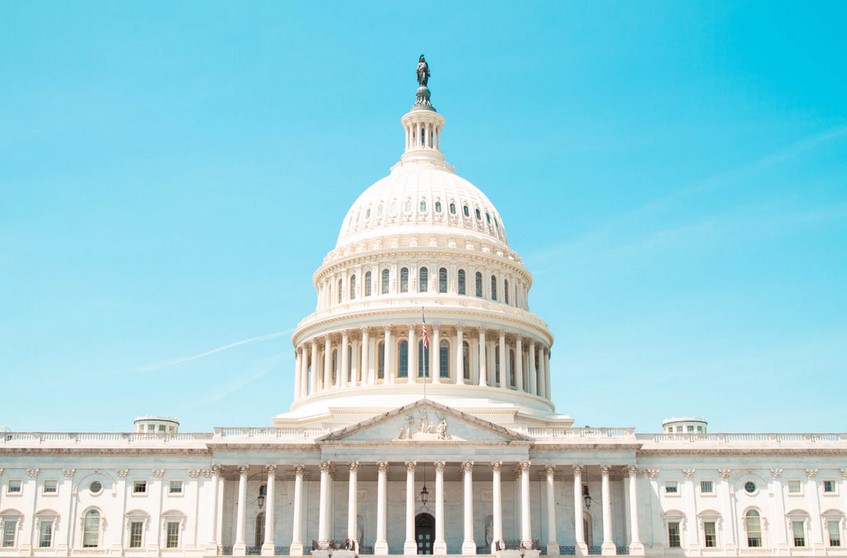 by Reynaldo Marquez
in Bitcoin Regulation
0

The crypto industry could be going through one of the most critical points of its history. In the United States, the $1 trillion bipartisan Infrastructure draft bill has been sent to the Senate to be approved. The bill seeks to impose more taxes on transactions related to cryptocurrencies.

As Jake Chervinsky, General Counselor at Compound Labs, said initially the bill included a provision that would expand the U.S. Tax Code definition of a “broker” to include any entity providing crypto-related services on behalf of someone else.

This would have made miners, exchanges, DeFi protocols, and “nearly everyone in crypto” susceptible to the bill. Thus, they would have had to provide the U.S. authorities with more information about the people using their platforms to comply with tax obligations, and in some cases such as DeFi and smart contract, the bill would have been unenforceable.

The provision was allegedly pushed into the bill to excerpt pressure on the crypto industry and use the tax revenue to aid the Federal Government to pay for the “increased infrastructure spending”, Jerry Brito from Coin Center said. Apparently, the Internal Revenue Service (IRS) was already greenlighted to issue more rules, but the changes were “rushed” into the Infrastructure bill.

1/ Why is consequential tax policy being made in a rushed infrastructure bill? Here's the answer.

IRS already has authority to require reporting and it had plans in place to issue new rules on crypto. But someone wanted to count the revenue from that in the infrastructure bill. pic.twitter.com/c7N7u5an35

The bill’s provision saw opposition from Senators Cynthia Lummis, Ron Wyden, and Pat Toomey. They introduced an amendment that would exclude node validators, hardware, and software wallet makers, and the developers building the protocols. The amendment was “likely” to be approved.

However, at the last minute, two other senators introduced their own amendment. Senators Rob Portman and Mark Warner. This would except Proof-of-Work node validators (miners) and other PoW based projects. Crypto Developers and other services wouldn’t be excluded.

10/ Then, in a DC flip-flop so fast it'll make your head spin, Senator Portman proposed his own competing amendment, co-sponsored by Senator Warner, a Democrat.

The Portman-Warner amendment is worse than useless. It doesn't come close to passing the laugh test. It only excepts: pic.twitter.com/X8QJQZRcaO

The Future of The Crypto Industry To Be Decided On A Saturday?

As Chervinsky noted, the amendments are competing and will be voted on the Senate floor tomorrow Saturday 7th. The one introduced by Lummis, Wyden, and Toomey seems to represent the most beneficial amendment for the crypto industry as a whole, but the legal expert said:

Good policy apparently isn’t the priority here. Instead, this looks like a continuation of the US Treasury Department’s embrace of warrantless surveillance & crusade against financial privacy in crypto. The strategy is new, but the motivation is not (…)

The Biden administration has “formally” come out in support of the Portman-Warner amendment. Thus, the crypto supporters could have a harder time passing on the Lummis-led amendment. Therefore, Lummis and others have asked the people to reach out to their senators to vote “NO” on the Warner-Portman proposal.

Ron Hammond, Director of Government Relations at the Blockchain Association, said the following:

The fact the crypto industry has forced a delay on arguably the largest policy priority of the Administration (outside of COVID) is a testament to the strong lobbying forces in play. We are working together and to say we haven’t slept much in the past week is an understatement…

The crypto community has been organizing and a website has been launch for U.S. resident to easily contact their Senators, accessible here. Whatever the outcome of tomorrow’s voting, the industry could see further attempts of regulation from the U.S. and other governments around the world.

Despite their differences, many projects, actors, relevant individuals, and users seem to be banding together to defend the crypto industry and its capacity to innovate.

Just called. Easy and fast. Got one automated line and one live staffer.

As someone who knows DC, I assure you that calls from the public matter. Three caveats: You must be from their home state, otherwise they ignore you. Also, call volume is obviously impt. And be polite. https://t.co/UHl1sD7VBq

At the time of writing, the crypto market has seen positive performance seemingly unaffected by current events. Bitcoin is trading at $42,500 after weeks in a downtrend.