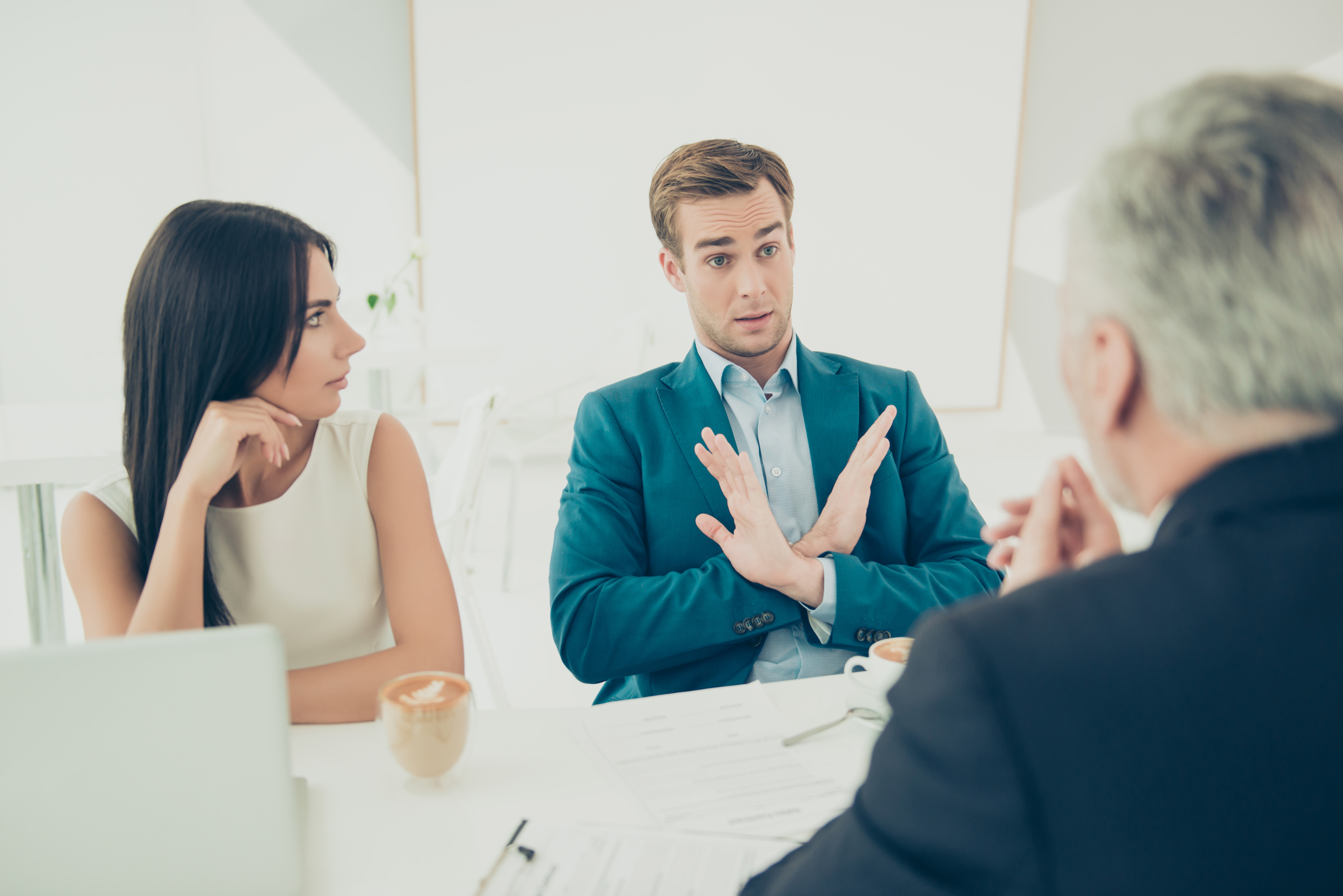 Deal or no Deal

Just as we’re seeing a sudden increase in interest from the financial sector who are looking to integrate cryptoassets into their ecosystem, it seems that some countries are now seeing the urgency as well.

Yesterday, the Kremlin put out a statement from President Putin who has issued a hard deadline of July 1st, just five months from now, for the full regulation of digital assets and cryptocurrencies. It seems as if Russia is now rushing to get involved in all aspects of this new market including bitcoin trading, ICOs, mining operations and so on.

Some economists are already casting doubts about the sustainability of US debt and the viability of the US Dollar as the global reserve currency. Yesterday we even explored how the US Federal Reserve has provided evidence that the current trajectory is cause for concern.

Russia and several other countries are not happy with the status quo and have been advocating for some level of de-dollarization for a long time. We can only speculate at this point whether or not the legalization of crypto is part of that strategy.

No Deal with N Korea

Please note: All data, figures & graphs are valid as of February 28th. All trading carries risk. Only risk capital you can afford to lose.

The meeting between President Trump and Kim Jong Un ended abruptly this morning and no deal was reached. The tone from the President is still positive as he feels that a deal could eventually be reached but in any negotiations, “sometimes you need to walk away.”

Focus will soon shift back to the negotiations between the US and China. It seems that Trump and Xi will be meeting soon at Trump’s resort in Mar-a-Lago.

Indeed, the entire episode that we witnessed this morning in Vietnam seems to be a precursor to the Xi meetings. By walking away from Kim, Trump has greatly strengthened his reputation of being willing to walk out if he doesn’t get what he wants. In the press Hanoi conference, Trump even claimed that the current tariffs are improving economic conditions back home and weakening coinditions in China. 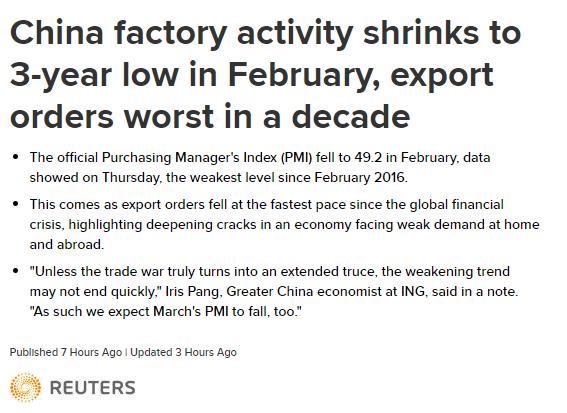 Also worth mentioning today is that the GBPUSD is rising on the hope that Brexit will be delayed. However, the delay is still far from a certainty.

Also, watch out for US GDP figures that will be released an hour before the opening bell.

A few days ago it was reported that about $7 million worth of EOS was stolen due to an update that didn’t go so smoothly. Allegedly the funds were transferred to the Huobi exchange who soon blacklisted and locked down the tokens.

Bugs happen in software and it’s good to see that this situation was rectified pretty quickly, but another issue cropping up lately around EOS is the growing size of the blockchain, which now stands at around four terabytes.

Now, this isn’t a lot of storage space when we compare it to the data centers of Google, or Amazon, or even some governments. However, the deeper issue is that the network does not seem to be properly incentivizing participants to store the data.

At present, there are only two block producers who are storing the entire amount of data, which could be causing strain on the network. I’m not terribly worried about this as the dev team does seem to have a fix in the pipeline and EOS has been outperforming the rest of the crypto market over the last month, but I did feel it relevant to bring to your attention given my recent bullish statements on EOS. 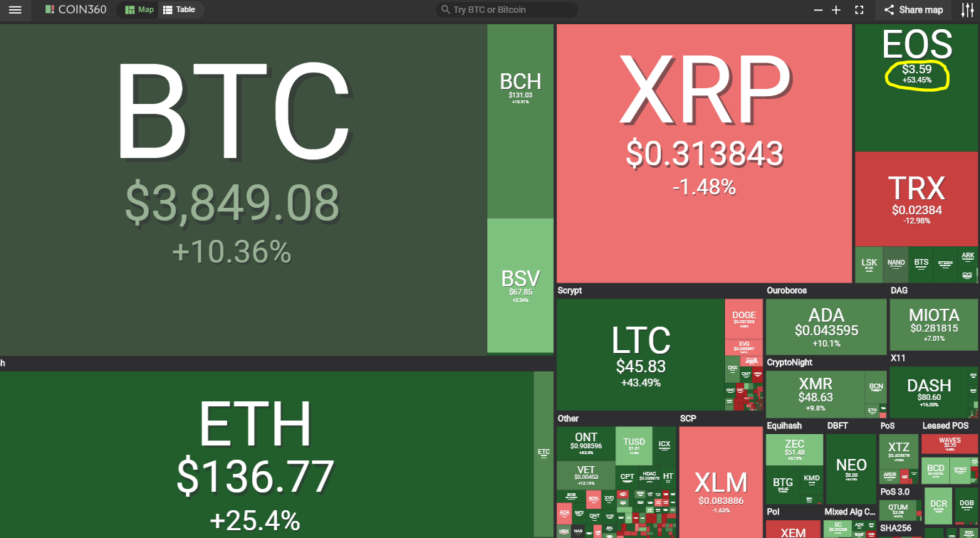 Tonight the Ethereum network will undergo an essential update that could potentially alter the economics of the token. We’ve discussed this in several updates already but I did want to summarize again what we know.

From what it seems the issuance of new Ethereum tokens is about to be reduced drastically, which could very well reduce the rate of overall inflation. Historically, Ethereum adds about 20,000 to 30,000 new tokens per day. Over the last two weeks, this number has dropped to about 13,000.

Constantinople is set to stabilize block rewards and further reduce the incoming supply to about 11,000 to 11,500 per day. This is approximately half the average levels seen throughout 2017 and 2018 and about a third the levels of 2016. 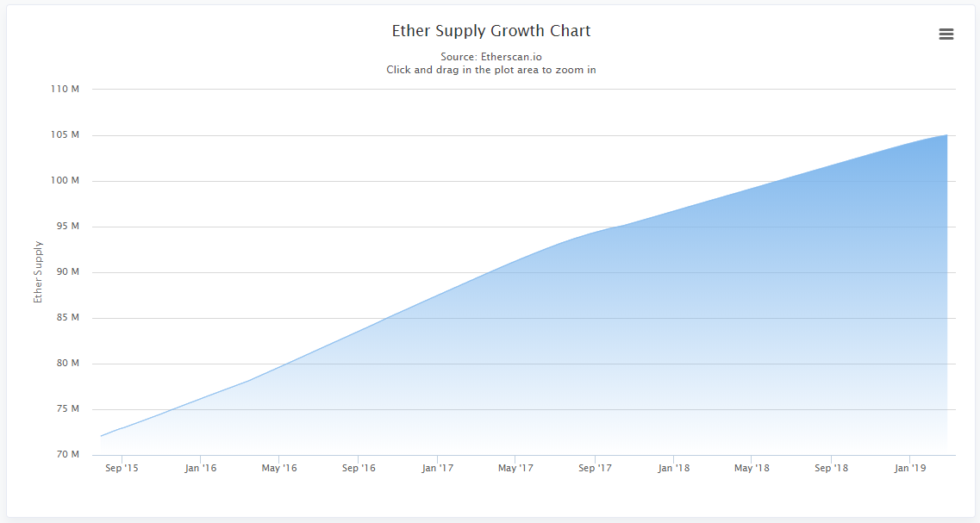 However, we also know that the fee structure is going to be altered to make the network more efficient. So it’s entirely possible that demand could be reduced as well. We’ll need to wait and see.

A recent figure from a new site called Defi Pulse estimates that about $321 million worth of Ether is currently locked in smart contracts. Even though this is about 2.25% of the total market cap, we do need to consider that a large portion of new tokens will be taken out of immediate circulation as a store of value, so even if the new fees structure does decrease demand somewhat, there’s a limit to how much bottom line inflation will be impacted.

Unfortunately, this isn’t really a tradable event but more something for long term investors “Hodlers” to consider. Please note that Ethereum trading on eToro will be temporarily disabled shortly before the time of the fork and will remain offline until the network stabilizes.

Wishing all of you and the Ethereum network a very smooth day.