Ethereum and the rest of the crypto market – except for Bitcoin – have struggled to gain any momentum over the past few days and weeks.

The stagnant price action seen by ETH also comes amidst the phase 0 rollout of Ethereum 2.0 – which was widely expected to be a catalyst for upside.

That being said, its inability to rally so far indicates that some underlying weakness plagues it.

One analyst is noting that this weakness will likely persist until it can break above $390. He contends that a break above this level will allow it to rally and catch up to Bitcoin.

At the time of writing, Ethereum is trading down just under 2% at its current price of $380. This is around where it has been trading throughout the past few days and weeks.

Its inability to gain any directionality has been somewhat surprising, as the cryptocurrency has broken its correlation to Bitcoin for the first time in a long time.

There is a chance that some downside will be seen in the coming few days if bulls are unable to step up and propel it higher, as even the early stage of the 2.0 rollout hasn’t catalyzed any momentum.

Analyst Claims $390 is Crucial to Surmount

While sharing his thoughts on where Ethereum might trend next, one analyst explained that $390 is a crucial level to watch closely in the near-term.

He believes a break above it could send it flying past $400.

“ETH / USD: I don’t short Ethereum because im not a moron, that said currently PA needs to get above and flip $390 into support for us to start heading higher, seems to be that price as gotten comfortable below $400 recently… Thinking that tomorrow we could see $400+. Send it.” 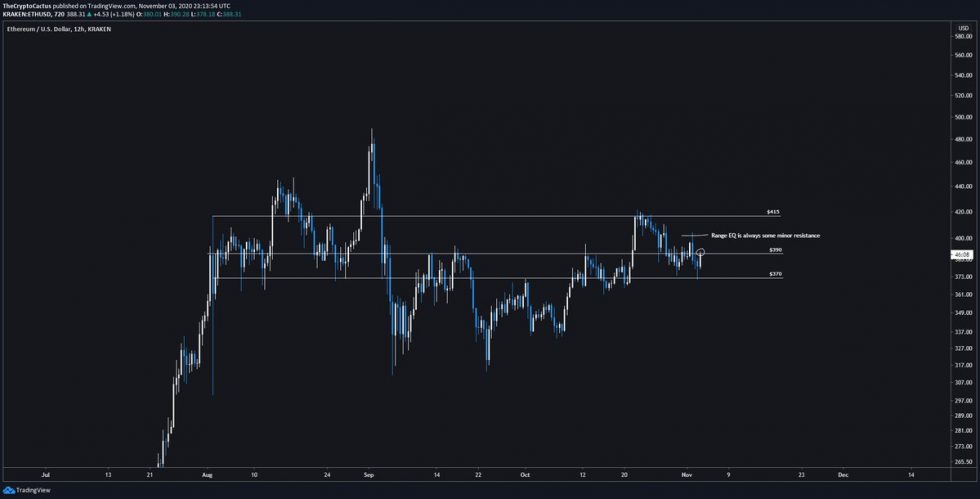 If this rally does take place, it could also create a tailwind that carries some smaller altcoins higher as well.