Bitcoin’s unrelenting consolidation phase has done little to provide other cryptocurrencies – like Ethereum – with any clear directionality, causing the entire market to fall into a prolonged period of consolidation.

This has proven to be particularly impactful for altcoins within the DeFi sector, which are largely considered to be “high beta” assets that carry heightened risk and volatility over their larger counterparts.

Ethereum, however, has simply been tracking Bitcoin’s every move, struggling to gain any independent momentum.

One trader is now noting that this could lead it down to $300 before it finds any significant support.

At the time of writing, Ethereum is trading up just under 1% at its current price of $350. This is around where it has been trading for the past few days.

Bitcoin similarly has been stuck between $10,500 and $10,600, struggling to provide the entire market with a trend.

At the moment, Ethereum is trading well-above its recent lows of $315 that were set during a strong selloff last week.

One analyst believes that Ethereum could be in for some further short-term weakness, despite flashing signs of strength on its macro chart.

He notes that it is “very possible” that ETH tests $300 in the near-term, before hitting some massive technical support levels.

“ETH / USD: Personally with so much uncertainty in the market it is very possible we see a $300 region retest, that said honestly HTF structure is looking great, lots of EMA support below us… In 2018/2019 the 55 EMA was consistently resistance, price now trending well above!” 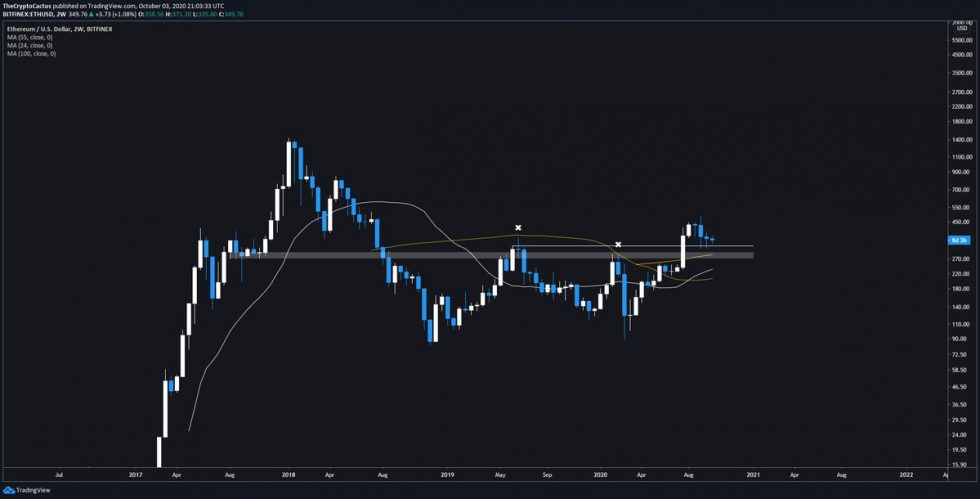 Unless Bitcoin rallies higher and creates a tailwind for Ethereum, mounting uncertainty amongst investors may continue plaguing its near-term outlook.