A crypto industry association in Russia has launched a project with the target of attracting Bitcoin miners to the nation.

As China’s crackdowns on crypto mining continue, miners have been migrating out of the nation in hordes. They have been on the search for other more favorable locations.

Not letting the opportunity go away, the Russian Association of Crypto Industry and Blockchain (RACIB) plans to make the nation an attractive location for these miners.

According to the organization, Russia has several conditions that make it an ideal location for mining. For instance, there is the fact that the nation ranks among the top 5 countries by electricity production. Energy resources like traditional fuels are also easily accessible around the country.

Russia also has a large surplus of energy production capacity, and some regions even reach 50% in surplus.

The country also has a low population density, which means it should be easier to set up large scale operations. And combined with the cold climate, cooling all the mining equipment shouldn’t prove to be too costly.

All this provides additional advantages and attractiveness for large foreign investments in the Russian energy complex, provides the best conditions for the formation of specialized clusters on the territory of the country that support global cryptocurrency networks and the infrastructure of the global digital economy.

Also, 40% of Russia’s power comes from eco-friendly energy sources like hydro and nuclear so the country provides a green path for miners.

The announcement comes after Kazakhstan, one of Russia’s neighbors, overtook the country in terms of mining capacity.

Kazakhstan now ranks third in crypto mining volume in the world, while Russia has dropped down to fourth.

At the time of writing, BTC’s price floats around $30.7k, down 7% in the past week. Over the past month, the crypto has dropped 14% in value.

Here is a chart noting the trend in the Bitcoin‘s price over the past year: 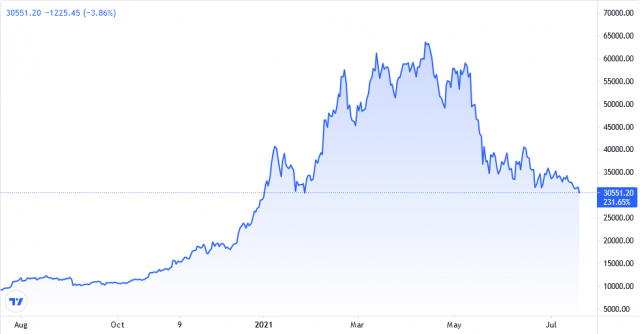 Over the past few weeks, BTC has failed to break out from the $30k-$35k range. However, with the current downtrend, the coin has come quite close to the lower level of that range.

It’s yet to be clear if the price of the crypto is going to continue to fall further, and if the coin will finally escape from this zone.

The price could drop, but it might quickly be pumped back up, before hitting the $35k resistance level again. Similar to how it has been for a while now. Or perhaps it might be different this time.