How Anonymous Is Crypto? The Answer Might Surprise You: Bitcoin and PrivaCrip

For a long time now, it has been widely accepted that crypto transactions, especially the ones made on the Bitcoin network, are 100% anonymous. While this is indeed a valid claim, some pitfalls come with it, and they are more substantial than you think. To exemplify what I mean, I would like to refer to a research study by Qatar University.

The University published a detailed analysis showing how easy the law enforcement or even average joes can dig up evidence of years-old Bitcoin transactions when spenders were not careful enough to launder their money.

Insane to think about it, but in more than 100 cases, they connected someone’s Bitcoin (BTC) payment on the Silk Road to that person’s public account. Adding even more gasoline to the fire, the researchers revealed that in more than 20 occurrences, they could link those public accounts to specific names and even locations.

In this editorial, I welcome you to join me in the exciting pursuit of truth to answer once and for all: is blockchain technology really anonymous?

Two mutually exclusive features can best explain the Bitcoin privacy paradox: Since any bank or government doesn’t control the cryptocurrency, it is incredibly challenging for anyone’s real identity to pair with their Bitcoin cash. However, the public ledger of Bitcoin (BTC) transactions also has an immutable record of every Bitcoin transaction ever made from one address to another. This means that finding someone’s address to whom they are sending money or receiving becomes relatively trivial unless extra caution is put into hiding these transactions.

Since Qatar University’s research, very few academics have documented what constitutes the right way of connecting the dots. In fact, even the university team admitted that they have only used very straightforward tactics in their decryption. Namely, they did not utilize a method through which connections are made between Bitcoin addresses that “identity clusters of addresses” associated with the dark web black market. Nor did they not employ the help of the police enforcement to give access to information about the wallet addresses using the help of Coinbase, one of the biggest centralized exchanges worldwide. 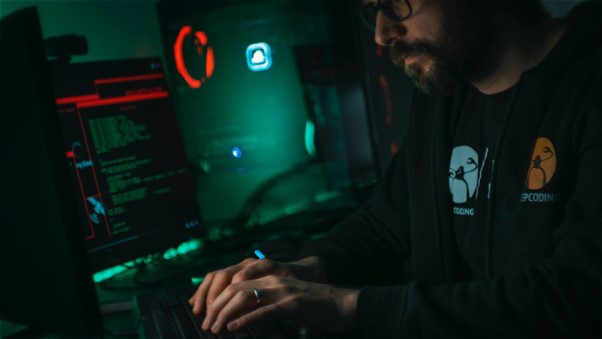 The short answer is yes. For example, Bitcoin’s latest upgrade, Taproot, was directed at tackling some of the aforementioned issues. Apart from storing multiple signatures and transactions together in one block, making it easier and faster to verify them, it also eliminates what is known as discredit by the receiver. In a nutshell, this feature makes it more difficult to identify inputs on Bitcoin’s blockchain.

Of course, this was done not to propagate the safe use of selling drugs but rather to give equal opportunity for each block to be accepted into the network. Miners would mine the next block without fully knowing the size of it (no grounds to discredit its acceptance), thus which is why faster transaction speed.

Another example of privacy developments is an upcoming project, PrivaCrip (PRCR), which is set to challenge the crypto’s status quo at its core. The main idea behind the project is that users’ personal information will be represented through tokenized data that would belong only to them.

This would allow building privacy-enhanced applications on top of the PrivaCrip network, which would not only accelerate the use cases of Web 3.0 but also would increase the rate of crypto adoption worldwide. And with less than a month left for the project presale to end, be sure to give it a check.

I guess the best possible answer to the posed question would be that blockchain technology is anonymous, but only to a limited extent. This is why such projects as PrivaCrip (PRCR) are looking for ways to give our personal information recorded on a blockchain ledger back where it belongs: in the hands of users.

The growing adoption of Web 3.0 would inevitably challenge how we perceive data and how it is distributed with some day it becoming completely discrete. However, remember that even the most anonymous technology can lead back to you, so be aware of that next time you pay with crypto.

If you want to learn more about PrivaCrip visit their website for information.