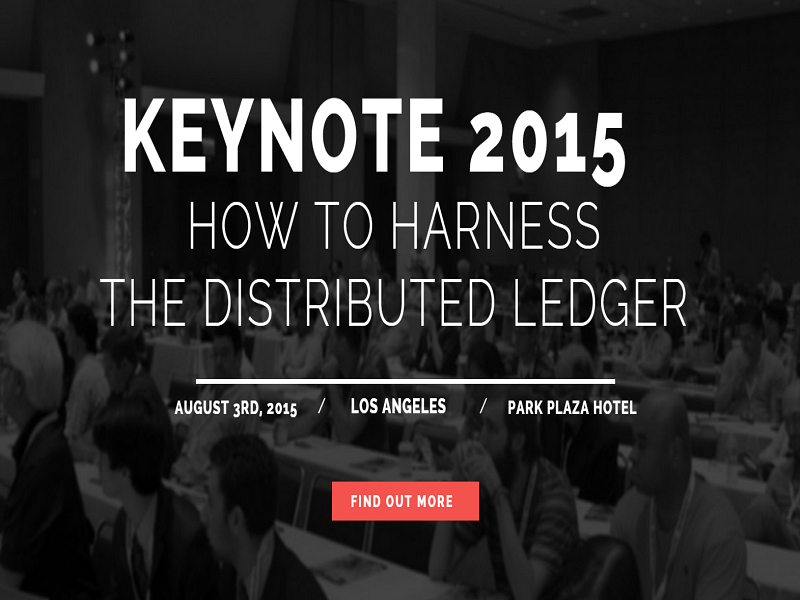 Keynote2015 is a new FinTech conference that aims to spread knowledge about Bitcoin in Los Angeles, California. This conference focuses around Bitcoin, the blockchain, and the benefits these two technologies can bring to the financial sector. Keynote2015 will take place on August 3, 2015, at the Park Plaza Hotel in LA.

The Keynote team firmly believes that the blockchain is big news for the finance industry. The conference’s official website cites blockchain implementation and investment from NASDAQ, UBS, and entrepreneurs such as Steve Wozniak, Jeremy Allaire, and Richard Branson as evidence that finance’s icons are interested in Bitcoin and its underlying technology. Furthermore, the conference organizers believe that adoption in this early stage of Bitcoin’s evolution will grant firms a first mover advantage:

“Attend Keynote2015 to get yourself up to speed on the applications, ramifications and nuances of distributed ledgers. Be the first among your peers to profit from this new technology.”

This conference is being produced by the team behind the extremely popular North American Bitcoin Conference, which is held every January. This team has hosted over 3,500 at its previous FinTech events, with international media coverage from names such as Forbes, the Wall Street Journal, Gizmodo, and the Chicago Tribune. Keynote2015 will feature representatives from many different businesses, including Paypal, Square, and JP Morgan, as well as venture capital groups, digital currency investors, and 500 financial executives.

The current roster of speakers for the event includes leaders from several different companies. Among these speakers are Brock Pierce of Blockchain Capital and the Bitcoin Foundation; Aaron Cooper, trial attorney for the CCIPS Department of Justice; Surash Ramamurthi, Chairman of CBW Bank; and Daniel Palacio, Founder of Authy. The Keynote team has also issued a call for papers, which can be submitted for presentation at the conference in August. Some acceptable topics for paper submissions are Bitcoin, crowdfunding, cyber security, soft computing, and software economics.

The Keynote2015 team is looking for partners to sponsor the conference. The team claims that sponsoring the Keynote2015 conference is a great way for businesses to advertise themselves to the digital currency community. Big names in the Bitcoin community are already sponsoring the event, like Blockchain.info, the Digital Currency Council, and the Chamber of Digital Currency Commerce.

Tickets are currently on sale, and attendees can choose between a few different packages. The “Two x General Admission Tickets” package offers full conference passes, a coffee break, lunch, document sheets, and a $100 USD voucher for the team’s next event, for a price of $449. Single general admission tickets can be purchased for $249, although the voucher for single tickets is only worth $70. Students can show their school IDs at the door, which will allow them to purchase a ticket for $99. Finally, attendees can purchase a VIP ticket for $999, which gets them backstage and speaker access, a signed copy of a Bitcoin book, access to a private lounge, and access to the speaker’s lounge. Keynote2015 is currently not accepting Bitcoin for tickets on its website.

Will you attend the Keynote2015 conference? Let us know in the comments below!